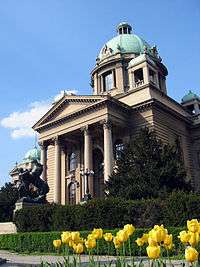 The Parliament Building of Serbia, formerly the Federal Assembly Building.

The first parliamentary body of the state was the Temporary National Representation which existed until the first elections were held on 28 November 1920. The new parliament was known as the Constitutional Assembly. The assembly adopted the controversial Vidovdan Constitution on 28 June 28, 1921, after which it became known as the National Assembly.

During the January 6th Dictatorship, the kingdom became a constitutional monarchy and a Senate was formed in addition to the National Assembly.

Anti-Fascist Council for the National Liberation of Yugoslavia