For the artistic movement, see Passionism.

The Passionists (Latin: Congregatio Passionis Iesu Christi[1]) are a Roman Catholic religious institute founded by Saint Paul of the Cross with a special emphasis on the Passion of Jesus Christ. Professed members use the initials C.P. after their names. A known symbol of the congregation is the labeled emblem of the Sacred Heart of Jesus, surmounted by a cross and is often sewn into the clothing attire of its congregants.

St. Paul of the Cross wrote the rules of the Congregation in December 1720, and in 1725 Pope Benedict XIII granted Paul the permission to form his congregation. Paul and his brother, John Baptist, were ordained by the pope on the same occasion. The full canonical title of the congregation, following the revision of their Constitutions approved by the Holy See in 1984, is The Congregation of the Passion of Jesus Christ.[1][2]

After serving for a time in the hospital of St. Gallicano they left Rome with permission of the Pope and went to Mount Argentaro, where they established the first house of the institute. They took up their abode in a small hermitage near the summit of the mount, to which was attached a chapel dedicated to St. Anthony. They were soon joined by three companions, one of whom was a priest, and the observance of community life according to the rules began there and is continued there to the present day.[1]

In 1769, Clement XIV granted full rights to the Passionists as enjoyed by the other religious institutes, making them not an order but a congregation. The congregation historically has had two primary goals: missionary work and contemplative life, with an attempt to blend the two. Its founder had attempted to combine aspects of the contemplative orders, such as the Trappist monks, together with the dynamic orders, such as the Jesuits.

"We seek the unity of our lives and our apostolate in the Passion of Jesus." The Passionists express their participation in the Passion by a special vow, by which they bind themselves to keep alive the memory of the Passion of Christ. They strive to foster awareness of its meaning and value for each person and for the life of the world. They seek to incorporate this vow into our daily lives by living the evangelical counsels.[3]

"Our mission aims at evangelizing others by means of the Word of the Cross."[3] 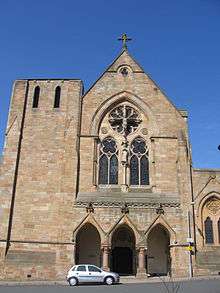 The RC Church of St Mungo's Church, Townhead, Glasgow is run by the Passionists

Traditionally, their main apostolate has been preaching missions and retreats. According to Saint Paul of the Cross, they were founded in order to "teach people how to pray", which they do through activities such as retreats and missions, spiritual direction, and prayer groups. Today they often also assist local churches in pastoral works, including saying masses, hearing confessions, and visiting the sick. Due to the continuing shortage of priests in the United States, the Passionists today are sometimes designated as pastors and assistant pastors of various parishes. The Passionists staff many retreat centers around the world.

Unlike the La Sallians or the Gabrielites, Passionists do not usually open schools and universities, except seminaries for their own students wishing to become brothers and priests. There are some schools sponsored and run by the Passionists, like the St. Gemma Galgani School, (which includes primary, junior high and high school-level education) in Santiago (Chile), but these are more the exception than the rule. The Passionists are involved in social welfare projects and education mainly in the various mission territories assigned to them.

Though Passionists are not required to work in non-Christian areas as missionaries, their Rule allows its members to be posted to missionary work, such as mainland China (before the Communists took over in 1949), India, and Japan, and in many other nations in Africa, Asia, Latin America and elsewhere as dictated by the pope or at the invitation of a local Bishop.

There are 2,179 Passionists in 61 countries[3] on the five continents, led by a superior general who is elected every six years. He is assisted by six consultors in governing the congregation. The present superior general is Father Joachim Rego, who was born in Burma and with his family moved to Australia at an early age. The congregation is divided into provinces, vice-provinces and missions. The Congregation is also divided into groups of provinces, vice-provinces and missions called configurations. The presidents of the six configurations constitute the Extended General Council which meets with the Superior General and his consultors annually.[4] 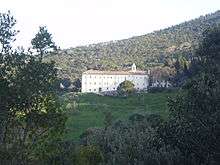 Monastery of the Presentation in Monte Argentario, Tuscany.

There are six configurations in the world:[5]

The official name of the institute is "The Congregation of the Passion of Jesus Christ". The superior general resides in Rome (Piazza Ss. Giovanni e Paolo, 13, 00184 Roma; tel. 06 772711). The founder is buried in a chapel attached to the Basilica of Saints John and Paul, and the General Headquarters also hosts an international house of studies for Passionists from around the world.

Characteristics of the Congregation

The members of the congregation are not allowed to possess land, and the congregation collectively can only own the community house and a bit of land attached to it. They rely completely on their own labor and on contributions from the faithful in order to maintain themselves financially. The habit worn by members is a rough wool tunic bearing the words "Jesu XPI Passio", meaning "Passion of Jesus Christ" and the congregation was historically discalced, wearing sandals rather than shoes.

Canonised members of the Congregation

Beatified members of the Congregation

In addition, the causes for the canonisation of Father Carl Schmitz, Father Ignatius Spencer, Father Theodore Foley and Elizabeth Prout have been opened. 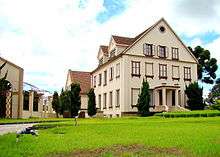 The Passionist Sisters (the Sisters of the Cross and Passion) is an institute founded in 1850 by Father Gaudentius Rossi, an early Passionist priest, as a convent for factory girls. In its infancy, it was called "Sisters of the Holy Family", and was later included under the Passionist family. Its first Mother Superior was Mother Mary Joseph Prout.

Due to their separate raisings guided by members of the congregation, Saints Maria Goretti and Gemma Galgani are traditionally counted in the ranks of the Passionists Sisters, even though they died before they could formally enter the institute (Maria was murdered, Gemma died of tuberculosis).