In the process towards sainthood, his cause for canonization opened in 1755, but it was soon closed. It was re-opened on 21 February 1931, but it was closed once again in 1940. It was opened once more on 17 January 2004, with the official process commencing in 2012. He now has the posthumous title of Servant of God.

He was born in Gravina in Puglia to Ferdinando III Orsini, duke of Gravina, and Giovanna Frangipani della Tolfa, from Toritto. He also had a brother, Domenico. He was a member of the Orsini of Rome, the third and last member of that family to become Pope. He entered the Dominican Order and received the name of "Vincenzo Maria".

He was named, by Pope Clement X, the Cardinal-Priest of San Sisto on 22 February 1672 (allegedly against his will); later he was bishop of Manfredonia, bishop of Cesena and then archbishop of Benevento. He remained a close friend of a local mystic, Serafina di dio.

Rise to the papacy

Upon the death of Pope Innocent XIII in 1724, a conclave was convoked to elect a successor. There were four divisions in the College of Cardinals and there were no clear candidates. At the conclave, Orsini was considered one of the papabile. Orsini was then proposed to be elected because he led a modest, austere life, considered to be a pastor.

Orsini refused to be elected prior to the final ballot, explaining that he was unworthy of it. After three hours of persuasion, he surrendered to the will of the cardinals and on 29 May 1724, he was elected pontiff. He chose the regnal name of "Benedict XIII" in honour of Pope Blessed Benedict XI because he was also of the Dominican Order.

On 4 June 1724, he was crowned by Benedetto Pamphili, the cardinal protodeacon. On the following 24 September, he took possession of the Basilica of St. John Lateran.

The new pope caused considerable embarrassment to his aides by his constant affinity for adding personal touches to official ceremonies. For example, he prostrated himself at the door of St. Peter's Basilica to kiss the floor; this was an innovation which completely upset the routine of the ceremony. The cortège of cardinals had no idea whether they should do the same or stand until the pope rose. The crowd behind, who thought he had collapsed, pushed and pressed to get a better view, causing many accidents and confusion. Another instance was when he refused to be carried in the Sedia gestatoria but insisted on walking through the basilica.[3]

A man not of wordly matters, he endeavoured to put a stop to the decadent lifestyles of the Italian priesthood and of the cardinalate. He also abolished the lottery in Rome. A man fond above all of asceticism and religious celebrations, according to Cardinal Lambertini (later Pope Benedict XIV) he "did not have any idea about how to rule".[4]

The government was effectively held in his lieu by Cardinal Niccolò Coscia, who had been Benedict XIII's secretary when he was archbishop of Benevento, and who committed a long series of financial abuses at his own advantage, causing the ruin of the Papal treasure. According to Montesquieu, "All the money of Rome go to Benevento... as the Beneventani direct [Benedict's] weakness".[5]

Icon of Benedict XIII in the Basilica of St. Paul outside the Walls.

In foreign politics, he struggled with John V of Portugal and the Jansenists.

Benedict XIII elevated 29 new cardinals into the cardinalate in a total of 12 consistories.

Benedict XIII, whose orders were descended from Scipione Rebiba, personally consecrated at least 139 bishops for various important European sees, including German, French, English and New World bishops. These bishops in turn consecrated bishops almost exclusively for their respective countries causing other episcopal lineages to die. As a result, more than 90% of present-day bishops trace their episcopal lineage through him to Cardinal Rebiba.[6]

With the papal bull Pretiosus dated May 26, 1727 Benedict XIII granted to all Dominicans major houses of study and in particular to the Roman College of St. Thomas, the future Pontifical University of St. Thomas Aquinas, Angelicum the right of conferring academic degrees in theology to students outside the Order.[7]

In 1727 he inaugurated the famous Spanish Steps and founded the University of Camerino.

Benedict XIII was suddenly attacked by a catarrh which had been bought about by officiating at the funeral service of Cardinal Marco Antonio Ansidei, of which he died of on 21 February 1730 at the age of 81. His death was made public to the people the next day. 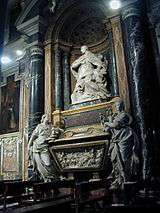 The tomb of Benedict XIII.

The pope was of middling size; his countenance was mild, his nose aquiline and he had a broad forehead. At the autopsy, it was discovered that his heart was remarkably large. His funeral ceremonies were performed at the Vatican, whence he was removed to the Santa Maria sopra Minerva where he was buried in a tomb completed by Pietro Bracci and others.

Pope Benedict XIV said of Benedict XIII: "We respectfully love that pontiff who backed his carriage rather than dispute the passage with a cartman." On that occasion Benedict XIII exclaimed to his coachman: "Non ci far impicci"—"Do not involve us in a quarrel."

Meanwhile, Coscia fled from the city in the circumstance, being excommunicated under the new Pope Clement XII. He was later restored and took part in the conclaves of 1730 and 1740.

This anonymous satirical comment on Benedict XIII's death was posted at the Pasquino:

"This tomb encloses
the bones of a little friar:
more than a saint's lover
a protector of brigands"

State of Benedict XIII in Palermo.

The process for his beatification was opened in Tortona in 1755 under Pope Benedict XIV but it did not at all advance and so was stalled. On 21 February 1931, also in Tortona, the process was revitalized but the presumed doubts about the morality of the late pontiff's Cardinal Secretary of State, Cardinal Niccolò Coscia, caused its closing in 1940.

The process was reopened on 17 January 2004. The official diocesan process commenced in Rome in early 2012 and the official opening of that process was held in the Basilica of Saint John Lateran, presided by Cardinal Agostino Vallini. The postulator of the cause is the Dominican priest Francesco Maria Ricci.[8] He now has the posthumous title of Servant of God.