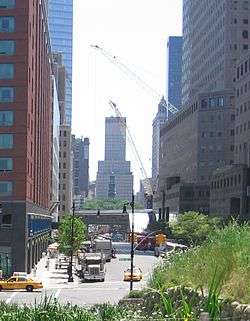 Looking east from the Irish Hunger Memorial, with 3 World Financial Center on the right, and St. Paul's Chapel and 222 Broadway in the distance

Vesey Street (/viːziː/ VEE-zee)[1] is a street in New York City that runs east-west in Lower Manhattan. The street is named after Rev. William Vesey (1674-1746), the first rector of nearby Trinity Church.[2]

Vesey Street was the birthplace of The Great Atlantic and Pacific Tea Company, the retail group more commonly known as "A&P."

Template:Attached KML/Vesey Street
KML is from Wikidata
This article is issued from Wikipedia - version of the 9/12/2016. The text is available under the Creative Commons Attribution/Share Alike but additional terms may apply for the media files.