The First Continental Congress was a meeting of delegates from twelve of the Thirteen Colonies that met on September 5 to October 26, 1774, at Carpenters' Hall in Philadelphia, Pennsylvania, early in the American Revolution. It was called in response to "The passage of the Coercive Acts" (also known as Intolerable Acts by the Colonial Americans) by the British Parliament. The Intolerable Acts had punished Massachusetts for the Boston Tea Party.

The Congress was attended by 56 delegates. The Pennsylvania delegation was appointed by the colonial assembly. Georgia declined to send delegates because they were hoping for British assistance with Native American problems on their frontier and did not want to upset the British.[1]

The Congress met briefly to consider options, including an economic boycott of British trade; rights and grievances; and petitioned King George III for redress of those grievances.

The Congress also called for another Continental Congress in the event that their petition was unsuccessful in halting enforcement of the Intolerable Acts. Their appeal to the Crown had no effect, and so the Second Continental Congress was convened the following year to organize the defense of the colonies at the onset of the American Revolutionary War. The delegates also urged each colony to set up and train its own militia. 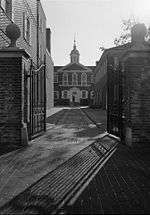 The Congress met from September 5 to October 26, 1774. Peyton Randolph presided over the proceedings; Henry Middleton took over as President of the Congress for the last few days, from October 22 to October 26. Charles Thomson, leader of Philadelphia Committee of Correspondence, was selected to be Secretary of the Continental Congress.[2]

The delegates who attended the Congress were not of one mind concerning why they were there. Conservatives, such as Joseph Galloway, John Dickinson, John Jay, and Edward Rutledge, believed their task to be the forging of common policies to pressure Parliament to rescind its unreasonable acts. Their ultimate goal was to develop a reasonable solution to the difficulties and bring about reconciliation between the colonies and Great Britain. Radicals, such as Patrick Henry, Roger Sherman, Samuel Adams, and John Adams, believed their task to be the development of a decisive statement of the rights and liberties of the Colonies. Their ultimate goal was to end the perceived abuses of parliamentary authority, and to retain, in the empire and under the king if possible, the constitutional rights which were claimed on the basis of the colonial charters and the English constitution.[3]

Among the radicals, Sherman denied altogether the legislative authority of Parliament and Henry was of the opinion that the Congress needed to develop a completely new system of governance, independent from Great Britain, for the existing colonial governments were already dissolved.[4] To counter these ideas, Galloway put forward a "Plan of Union", which suggested an American legislative body be formed, with some authority, and whose consent would be required for imperial measures.[4][5]

In the end, the voices of reconciliation and compromise carried the day. Rather than precipitate rebellion by calling for independence, the First Continental Congress, in its Declaration and Resolves, passed and signed the Continental Association, which called for a boycott of British goods to take effect in December 1774. It requested that local Committees of Safety enforce the boycott and regulate local prices for goods. These resolutions adopted by the Congress did not acknowledge the legal power of Parliament even to regulate trade, but consented, nonetheless, to the operation of acts for that purpose. Furthermore, they did not repudiate control by the royal prerogative, which was explicitly acknowledged in the Petition to the King a few days later.

The Congress had two primary accomplishments. The first was a compact among the colonies to boycott British goods beginning on December 1, 1774.[6] The West Indies were threatened with a boycott unless the islands agreed to nonimportation of British goods.[7] Imports from Britain dropped by 97 percent in 1775, compared with the previous year.[6] Committees of observation and inspection were to be formed in each colony for enforcement of the Association. All of the colonial Houses of Assembly approved the proceedings of the congress with the exception of New York.[8]

If the "Intolerable Acts" were not repealed, the colonies would also cease exports to Britain after September 10, 1775.[6] The boycott was successfully implemented, but its potential for altering British colonial policy was cut off by the outbreak of the American Revolutionary War. The colonists were forced to quarter British soldiers, and feed them.

The second accomplishment of the Congress was to provide for a Second Continental Congress to meet on May 10, 1775. In addition to the colonies which had sent delegates to the First Continental Congress, the Congress resolved on October 21, 1774, to send letters of invitation to Quebec, Saint John's Island (now Prince Edward Island), Nova Scotia, Georgia, East Florida, and West Florida.[9] However, letters appear to have been sent only to Quebec (three letters in all). None of these other colonies sent delegates to the opening of the second Congress, though a delegation from Georgia arrived the following July.[10]