As of the 2010 census, Bossier City had a population of 61,315.[1] The 2013 estimate was 66,333.[6] Bossier City is located on the eastern bank of the Red River and is closely tied to its larger sister city Shreveport on the opposite bank. The Shreveport – Bossier City metropolitan area is the center of the region known as the Ark-La-Tex.

Bossier City is not the parish seat. The parish courthouse is located instead in Benton about 12 miles (19 km) to the north of Bossier City.

In the 1830s, Bossier City was the plantation Elysian Grove, purchased by James Cane and his 2nd wife Mary D. C. Cane. James and his 1st wife, Rebecca Bennett, came to the area with Rebecca's brother, William Bennett and his wife Mary Doal Cilley Bennett. They first had the trading post across the river on what was then Caddo Indian Land, a portion called "Bennett's Bluff." The trading post partners and Mary D. C. Bennett's father Samuel Bennett, became a 1/7th partner in the new Shreve Town, which eventually became Shreveport.

Elysian Grove plantation was on the Red River, at the intersection of the Texas Trail on the Red River where the trading post ran the ferry crossing between what was to become Shreveport and Bossier. The plantation loading and unloading dock later became known as Cane's Landing in the old Ferry log books.[7] For a very short time, Cane's Landing would become known as Cane City. Mary D. C. Bennett Cane and her family were one of the earliest settlers in the area, and Mary gave birth to the first white baby of the area, a son, William Smith Bennett Jr. who died at an early age.[8][9]

In the 1840s, the Great Western Migration began, and the parish grew in population. Many early settlers passed through the region on their way to the wild West. By 1850, over 200 wagons a week passed through Bossier City. Some of these settlers stayed, attracted by the soil and river valley. In 1850, the census listed the population at around 6,962.

During the Civil War, companies of Confederate soldiers left Cane's Landing aboard steamboats for the distant battlefields. Mrs. Cane hosted hundreds of Confederate officers and troops who were heading off to war. Mrs. Cane's plantation was fortified to protect Shreveport by three batteries, with Fort Kirby Smith in the center. The others were Batteries Price, and Walker & Ewell.

Fort Smith stood near the now Bossier High School, and protected the area from an eastern invasion. The Civil War hit Bossier Parish in 1861, and ended in Shreveport four years later when the Trans-Mississippi Department surrendered.

Shed Road, the first all-weather turnpike in the American South, was constructed in the 1870s and operated from 1874 to 1886. It extended for 9 miles (14 km) from Red Chute to the Red River. There was a plantation at the end of the elevated and covered roadway, which was reached by a ferry boat. The covered road made the transportation of goods easier before the arrival of the railroads.

Classification as a city

Anna B., granddaughter of James and Mary, felt the area would prosper and began promoting the idea of a riverfront city. Anna B. and J. J. Stockwell sold lots in 1883. The area grew quickly, as did transportation through it.

Cane City was said as being incorporated by former Governor Newton C. Blanchard and renamed as the village of Bossier City. Blanchard named a Shreveport businessman, Ewald Max Hoyer, as the first Bossier City mayor. Hoyer continued to reside in what is known as the Bliss-Hoyer House in Shreveport's Highland neighborhood. Bossier City has grown from an area of one square mile to a city containing more than 40 square miles (100 km2). Continued growth led to Bossier City's classification being changed from village to town by Governor John M. Parker. Later, Governor Earl Kemp Long issued a proclamation classifying Bossier City a city.

The "golden spike" commemorated the completion of the east-west Vicksburg, Shreveport and Pacific Railroad. It was driven at Bossier City on July 12, 1884, by Julia "Pansy" Rule. It was the first such spike to be driven by a woman. The north-south Shreveport and Arkansas Railroad was completed on April 6, 1888. The Louisiana-Arkansas Railroad was completed on November 2, 1909. The Dixie Overland Highway from the East to the West Coast was built in 1918. These railroads and highways combined to make Bossier City a hub for future activity.

The discovery of crude oil, to the south, in 1908, thrust Bossier City into the nationwide oil boom. Bossier's central location to the rural oil fields made it a major player in the oil patch. Several international oil companies are located here. The advantages brought by black gold fueled many civic, social and economic improvements.

A fire on June 23, 1925, consumed one-half of downtown Bossier City. Local citizens were unable to battle the blaze. The loss spurred civic improvements including a modern water system capable of fighting such fires, a new City Hall, a modern fire alarm system, modern sidewalks and the first city park.

In the 1930s, construction began on Barksdale Air Force Base. The first unit assigned to Barksdale was the 20th Pursuit Group. Before World War II, Barksdale was a training school for the Army Air Corps. During the war, Barksdale trained pilots, navigators, and bombardiers. Later the base became one of the key bases of the Strategic Air Command in the new Air Force. Barksdale is the headquarters for the 8th Air Force. The land that base is built was purchased by local residents who donated the land to the U.S. Army.

In the 1890s, Cane City had a population of about 600. Bossier City now has a 2012 estimated population of over 64,000. First a cotton-exporting river landing, next a railroad town, then an airbase and oil-boom town, Bossier City is now known for its tourism and casino gambling.[10]

Three casinos in the city have financed a number of municipal projects, many completed during the administration of the late Mayor George Dement. Recent improvements include the CenturyLink Center, Louisiana Boardwalk, Benton Road Overpass, and the Arthur Ray Teague Parkway, located along the eastern side of the Red River. Dement also procured Amtrak service between Bossier City and Dallas, Texas.[11] Dement was succeeded as mayor in 2005 by his administrative assistant and former mayoral opponent from 1989, Lo Walker, the first Republican to hold the city's top executive position.[12]

Bossier shares most aspects of its climate with its sister city of Shreveport. The city has a humid subtropical climate (Köppen climate classification Cfa) with hot, humid summers and mild winters. During the warmer months, the city is prone to severe thunderstorms which feature heavy rain, high winds, hail, and occasional tornadoes. The city has a slightly above average rate of tornadoes when compared to the US average.[16] Due to the flat topography of the city and the prominence of smaller waterways that are prone to backwater flooding from the Red River, the city occasionally experiences severe flooding events. A notable occurrence of severe flooding occurred in March 2016 after torrential rains caused a rapid rise of many local waterways, displacing upwards of 3500 people from their homes across the area.[17][18] Freezing and ice storms occasionally occur during the winter months.

There were 23,197 households, out of which 36.8% had children under the age of 18 living with them, 50.4% were married couples living together, 15.8% had a female householder with no husband present, and 29.7% were non-families. Nearly 24.7% of all households were made up of individuals, and 8.4% had someone living alone who was 65 years of age or older. The average household size was 2.58 and the average family size was 3.09.

Bossier City residents are zoned to Bossier Parish Schools.[21] Public schools in the area are listed below:

Bossier City is served by the Bossier Press-Tribune and Shreveport Times. In addition, The Forum Newsweekly, City Lights and SB Magazine are newsmagazines in the Shreveport-Bossier area.

"Bossier City" is a song by David Allan Coe, in which he sings, "And it sure smells like snow in Bossier City..." Johnny Rodriguez recorded a song called "Achin' Bossier City Backyard Blues" in 1972. Turnpike Troubadours 2007 freshman album is entitled Bossier City, and includes the title track "Bossier City." 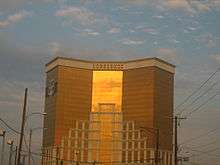 Horseshoe Casino offers gambling and entertainment in the Shreveport-Bossier metro area. It was opened by the late George Nattin, Jr., who became its first president. 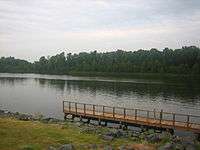 The Red River from the Arthur Teague Parkway in Bossier City

From the 1930s to the 1970s, Bossier was regionally and even nationally known for its entertainment district known as The Bossier Strip, which followed U.S. Highway 80 through the city. Nightclubs proliferated from the Texas Avenue Bridge to the Bossier-Webster parish line. Prior to the 1940s, The Strip was as well known for such entertainment as Las Vegas, Nevada.[23][24]

The CenturyLink Center (formerly CenturyTel Center) in Bossier City was the home of the Bossier–Shreveport Battle Wings of the AF2 , as well as the Bossier-Shreveport Mudbugs of the Central Hockey League. The arena has hosted top performers, including Britney Spears and Aerosmith, as well as rodeos, ice shows, and children's entertainment.

The 2005 Red River Classic PRCA Rodeo to be hosted at the CenturyTel Center was cancelled due to the arena being used as a shelter for Hurricane Katrina evacuees.[25]

The city hosts four riverboat casino gambling resorts along the east bank of the Red River: Margaritaville, Horseshoe, Boomtown, and Diamond Jack's. Horse racing and gambling on slot machines is also available at Harrah's Louisiana Downs, which opened in 1974.

Bossier City is the location of Barksdale Air Force Base, home of the 2nd Bomb Wing, 8th Air Force, and 307th Bomb Wing. It was established February 2, 1933, and is one of the area's largest employers. Barksdale encompasses 22,000 acres (89 km2) and hosts the majority of the B-52 Stratofortresses used by the United States Air Force.