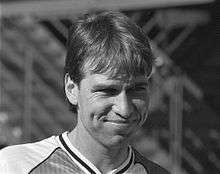 As a player, he spent his career on the bench Netherlands mostly with Sparta Rotterdam. He also played with NAC Breda and Roda JC.

The Korea Football Association signed him to a coaching contract on 26 June 2006.[2] Verbeek led Korea to a third-placed finish at the 2007 AFC Asian Cup, guaranteeing them an automatic berth in the 2011 AFC Asian Cup tournament. He resigned from coaching South Korea in July 2007 after the Asian Cup.

He was linked to coaching Australia after he said he would welcome another job in Asia and had previously been linked with the Socceroos coaching role in 2005.[3] On 6 December 2007 it was announced that Verbeek had secured the position as Australian coach.[4] In his first World Cup qualifier game as head coach, Verbeek led Australia to a 3-0 win against Qatar at home.

His poor opinion of the standard of the A-League are well known, describing the performances of locally based players Archie Thompson and Danny Allsopp against Indonesia as "absolutely hopeless" and openly questioning the decision of Jason Culina to quit PSV Eindhoven and return home to play in Australia.[5] When asked about possible improvements for the quality of football in the A-League, he said, "Do you have an hour?" and "I am just being honest".[5]

Under Verbeek, the Socceroos were the second country (apart from the host nation) to qualify for World Cup 2010 after a 0-0 draw against Qatar in June 2009, less than an hour after Japan had qualified.[6]

Australia lost 0-4 to the Germany in their opening match of the 2010 FIFA World Cup. In the match, Verbeek chose to start the game without a recognized striker. He was heavily criticized by the Australian media for refusing to play attacking players Josh Kennedy, Mark Bresciano and Harry Kewell, all of whom are proven goal-scorers at international level.[7] Australia then drew 1–1 with Ghana and defeated Serbia 2–1. They ended with four points, equal with Ghana, but were ranked third due to an inferior goal difference and did not progress from the group stage, with Verbeek departing shortly after.

On 8 April 2010, Verbeek was appointed the national youth technical director for Morocco. His primary role will be to identify and develop young talent for the Morocco national team, which has failed to qualify for the World Cup finals or the African Cup of Nations.[8]

Verbeek's teams usually employ two holding midfielders and a sole striker up front. His teams usually play conservatively with a slow tempo and gradually build up play and heavily rely on crosses.