Kyoto Sanga F.C. (京都サンガF.C., Kyōto Sanga Efushī) is a Japanese professional football (soccer) club based in Kyoto. The word "Sanga" is a Sanskrit term meaning "group" or "club", often used to denote Buddhist congregations.[3] This reflects Kyoto's tradition of Buddhist temples (see sangha). The club was formerly known as Kyoto Purple Sanga with "purple", the colour of the team uniforms, an imperial colour reflecting Kyoto's status as Japan's ancient imperial capital city. It was decided however that, from 2007, the team will simply been known as "Kyoto Sanga". They are the oldest club competing in the J.League. 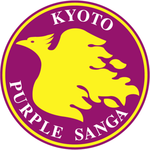 The club was started as Kyoto Shiko Club, one of the few proper Japanese football clubs in the sense of being strictly dedicated to football and not being part of a company. Like Ventforet Kofu, however, it could not rise to a Japan Soccer League First Division dominated by company teams; in 1993, after the J.League was created, Kyoto Shiko Club, aided by funds from local new sponsors Kyocera and Nintendo, professionalized (though some players broke away and formed their own clubs, see below) and joined the former Japan Football League under the new name Kyoto Purple Sanga. First joining the J.League in 1996, Kyoto Sanga hold the dubious distinction of being the League's most relegated side, having been demoted on three separate occasions. Relegation to J2 occurred at the end of the 2000, 2003 and 2006 seasons; more than any other team.[3] The 2003 relegation happened despite having many national team players on its roster. Stars like Park Ji-sung and Daisuke Matsui have since left for greener pastures. In December 2007 the club gained J1 status for the fourth time in their history via the promotion/relegation playoff.[4] A 0-2 home defeat to Urawa Reds on 14 November 2010 confirmed Sanga's relegation back to J2, bringing an end to their three-season spell in the top flight.[5]

Kyoto Sanga is considered the main continuation of the Kyoto Shiko Club that competed in the Japan Soccer League Second Division. "Shiko" (紫光) means "brilliant purple" and is the color that Shiko/Sanga have always worn.