A pro-drop language (from "pronoun-dropping") is a language in which certain classes of pronouns may be omitted when they are in some sense pragmatically inferable (the precise conditions vary from language to language, and can be quite intricate). The phenomenon of "pronoun-dropping" is also commonly referred to in linguistics as zero or null anaphora.

In everyday speech there are often instances when who or what is being referred to can be inferred from context. Proponents of the term "pro-drop" take the view that pronouns which in other languages would have those referents can be omitted, or be phonologically null. Among major languages, two of which might be called a pro-drop language are Japanese and Korean (featuring pronoun deletion not only for subjects, but for practically all grammatical contexts). Chinese, Slavic languages,[1] and American Sign Language also exhibit frequent pro-drop features. Non-pro-drop is rather an areal feature of Standard Average European including French, German, and English.[2]

Some languages might be considered only partially pro-drop in that they allow deletion of the subject pronoun. These null subject languages include most Romance languages, with French being the most notable exception, as well as all the Balto-Slavic languages and to a limited extent Icelandic.

History of the term

The term "pro-drop" stems from Noam Chomsky's "Lectures on Government and Binding" from 1981 as a cluster of properties of which "null subject" was one (for the occurrence of pro as a predicate rather than a subject in sentences with the copula see Moro 1997). According to this parameter, languages like Italian and Spanish may be classified as pro-drop languages, while English and French may not. The exploration of the properties related to the pro-drop was also crucial in identifying the notion of parameter. Empirically, the comparison between English and Italian became very important (cf. Rizzi 1982).

Thus, a one-way correlation was suggested between inflectional agreement (AGR) and empty pronouns on the one hand and between no agreement and overt pronouns, on the other. It is worth noting that in the classical version, languages which not only lack agreement morphology but also allow extensive dropping of pronouns—such as Japanese, Chinese, Korean, and Vietnamese—are not included, as is made clear in a footnote: "The principle suggested is fairly general, but does not apply to such languages as Japanese in which pronouns can be missing much more freely." (Chomsky 1981:284, fn 47).

The term pro-drop is also used in other frameworks in generative grammar, such as in lexical functional grammar (LFG), but in a more general sense: "Pro-drop is a widespread linguistic phenomenon in which, under certain conditions, a structural NP may be unexpressed, giving rise to a pronominal interpretation." (Bresnan 1982:384). For a general history of this term within the development of syntactic theory, see Graffi 2001.

The empty category assumed (under government and binding theory) to be present in the vacant subject position left by pro-dropping is known as pro, or as "little pro" (to distinguish it from "big PRO", an empty category associated with non-finite verb phrases).[3]

Consider the following examples from Japanese:

The pronouns in bold in the English translations (it in the first line, I, you, and it in the second) appear nowhere in the Japanese sentences but are understood from context. If nouns or pronouns were supplied, the resulting sentences would be grammatically correct but sound unnatural. (Learners of Japanese as a second language, especially those whose first language is non-pro-drop like English or French, often supply personal pronouns where they are pragmatically inferable, an example of language transfer.)

The above-mentioned examples from Japanese are readily rendered into Chinese:

Though it is worthy to note that unlike Japanese, the inclusion of the dropped pronouns does not make the sentence sound unnatural.

Arabic is considered a null-subject language, as demonstrated by the following example:

The subject "I" above is easily inferable as the verb gör-mek is declined in the first person simple past tense form. The object pronoun is supposed to be deduced from the context; where context is not clear enough, it should be supplied. For example, if one wants to make it sure that it was the person spoken to who was seen, one would say:

English is considered a non-pro-drop language. Nonetheless, subject pronouns are almost always dropped in imperative sentences (e.g., Come here). In informal speech, pronouns may sometimes be dropped in other types of sentences, together with some other words, especially copulas and auxiliaries:

In speech, when pronouns are not dropped, they are more often elided than other words in an utterance.

Relative pronouns are often dropped in short restrictive clauses: That's the man [whom] I saw.

Note that these elisions are generally restricted to very informal speech and certain fixed expressions, and the rules for their use are complex and vary among dialects. A noted instance was the "lived the dream" section of George H. W. Bush's speech at the 1988 Republican National Convention.[4][5][6][7]

Subject pronouns can be often omitted in modern Greek. Example:

Another phenomenon commonly encountered in modern Greek is the omission of the preposition and article in phrases denoting place or movement to place.

Most Romance languages (with the notable exception of French) are often categorised as pro-drop too, most of them only in the case of subject pronouns. Unlike in Japanese, however, the missing subject pronoun is not inferred strictly from pragmatics, but partially indicated by the morphology of the verb. Example:

In Portuguese object pronouns are often omitted. Once more the context helps. Example: Situation: Maria tries on a dress at a store, comes to her husband and asks:

Saw how beautiful? Don't like? Can buy? -2ndPERS-SING PRESENT-INDICATIVE ? (EP)

Have you seen how beautiful it is? Do you like it? Can you buy it?

From the situation, one can understand that she is talking about the dress.

Spanish and Portuguese are also notable amongst Romance languages because they have no specific pronouns for circumstantial complements (arguments denoting circumstance, consequence, place or manner, modifying the verb but not directly involved in the action) or partitives (words or phrases denoting a quantity of something). Compare the following: 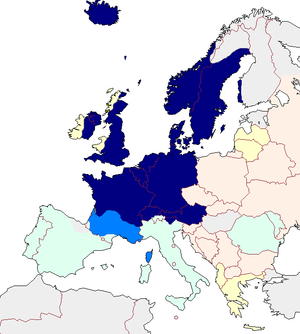 Expletive subjects are dropped in French while they are obligatorily expressed in English:

Je trouve __ difficile d'atteindre ce but.
I find it difficult to reach that goal.

All Slavic languages behave in a similar manner to the Romance pro-drop languages. Example:

Here he in the second sentence is inferred from context. In the East Slavic languages even the objective pronoun "его" can be omitted in the present and future tenses (both imperfect and perfective). As with the Romance languages mentioned above, the missing pronoun is not inferred strictly from pragmatics, but partially indicated by the morphology of the verb (Вижу, Виждам, Widzę, Vidim, etc...). However, the past tense of both imperfective and perfective in modern East Slavic languages inflects by gender and number rather than the person due to the fact that the present tense conjugations of the copula "to be" (Russian быть, Ukrainian бути, Belorussian быць) have practically fallen out of use. As such, the pronoun is often included in these tenses, especially in writing.

In Finnish, the verb inflection replaces first and second person pronouns in simple sentences, e.g. menen "I go", menette "all of you go". Pronouns are typically left in place only when they need to be inflected, e.g. me "we", meiltä "from us". There are possessive pronouns, but possessive suffixes, e.g. -ni as in kissani "my cat", are also used, as in Kissani söi kalan ("my cat ate a fish"). A peculiarity of colloquial Finnish is that the pronoun me ("we") can be dropped if the verb is placed in the passive voice (e.g. haetaan, standard "it is fetched", colloquial "we fetch"). In the Estonian language, a close relative of Finnish, the tendency is less clear. It generally uses explicit personal pronouns in the literary language, but these are often omitted in colloquial Estonian.

Since the participle lacks the distinction between grammatical persons, pronouns must be added in the majority of cases.

In contrast, the past tense and the future tense are composed of "non-degenerate" conjugations – the verb has a different cross-marked form for each grammatical person, and a properly conjugated verb contains all the information about the subject. The subjective pronoun is therefore normally dropped, except in third-person.

Many nouns can take suffixes to reflect the possessor, in which case the personal pronoun is dropped. In daily modern Hebrew usage, inflection of nouns is common only for simple nouns, and in most cases, inflected possessive pronouns are used. In Hebrew, possessive pronouns are treated mostly like adjectives and follow the nouns which they modify. In biblical Hebrew, inflection of more sophisticated nouns is more common than in modern usage.

Spanish, Italian, Catalan, Occitan and Romanian can elide subject pronouns only (Portuguese sometimes elides object pronouns as well), and they often do so even when the referent has not been mentioned. This is helped by person/number inflection on the verb. It has been observed that pro-drop languages are those with either rich inflection for person and number (Persian, Polish, Portuguese, etc.) or no such inflection at all (Japanese, Chinese, etc.), but languages that are intermediate (English, French, etc.) are non-pro-drop.

Other language families and linguistic regions

Many Pama–Nyungan languages, however, have clitics, which often attach to nonverbal hosts to express subjects. The other languages of Northwestern Australia are all pro-drop, for all classes of pronoun. Also, Papuan languages of New Guinea and Nilo-Saharan languages of East Africa are pro-drop.

Among the indigenous languages of the Americas, pro-drop is almost universal, as would be expected from the generally polysynthetic and head-marking character of the languages. That generally allows eliding of all object pronouns as well as subject ones. Indeed, most reports on Native American languages show that even emphatic use of pronouns exceptionally rare. Only a few Native American languages, mostly language isolates (Haida, Trumai, Wappo) and the Oto-Manguean family are known for normally using subject pronouns.

Classical Chinese exhibits extensive dropping not only pronouns but also any terms (subjects, verbs, objects, etc.) pragmatically inferable, giving a very compact character to the language. Note, however, that Classical Chinese was a written language, and such word dropping is not necessarily representative of the spoken language or even of the same linguistic phenomenon.