The Prospect Hill Historic District is an irregularly-shaped 185-acre (75 ha) historic district in New Haven, Connecticut. The district encompasses most of the residential portion of the Prospect Hill neighborhood.[2]

Selected contributing properties in the district are:

In 2002, application was made for a building that was located at 285 Prospect Street to be moved to 380 Edwards Street, while retaining its contributing building status. It is a building designed by R. Clipston Sturgis. It was approved.[4] 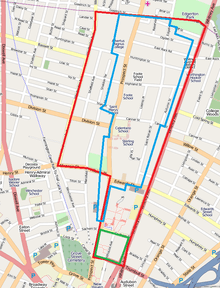 Approximate boundary of the district, in blue. Also shown are: in green, the Hillhouse Avenue Historic District and in red, the Prospect Hill neighborhood

The historic district includes most of New Haven's Prospect Hill neighborhood. The district borders are drawn irregularly to exclude modern construction, and also to exclude properties fronting Whitney Avenue,[3] which are included in the Whitney Avenue Historic District. It excludes the entire area of the Hillhouse Avenue Historic District, an area that was originally residential, and now is mostly Yale University-owned, and which included within the official neighborhood planning maps for Prospect Hill. The historic district also excludes the Edgerton historic district, the New Haven portion of which has been included in the official neighborhood planning maps for Prospect Hill.

The district extends to the south to include historic houses that are now Yale offices along the west side of Prospect Street south of Hillside Place.[5]