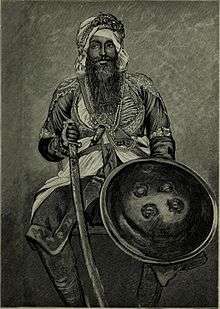 Nabha State,[1] with its capital at Nabha, was one of the Phulkian princely states of Punjab during the British Raj in India.

The family claims descent from the Bhatti founder of Jaisalmer, Jaisal. His third son Rai Hem, left the family domains after the usual quarrel and carved out a small principality for himself around Bhatinda and Bhatner. His successor in the fourth degree, Khiwa, fell on hard times ad was forced to move to Kot Ladwa, where he married a girl from the Jat Basehra caste, against the clan traditions of the Rajputs. Thereafter many quarrels ensued between his descendants at the Bhattis. The Mughals appointed his descendant Mehraj in 1526. This office became hereditary amongst his descendants until Phul, the Sikh ancestor of the dynasty, which came to rule over Patiala, Jind and Nabha[2] The state was established in 1763 after the capture of Sirhind by the Sikh Confederacy. With the capture of Sirhind, most of the old imperial province was divided amongst the Phulkian chiefs. The area around Amloh was taken by the chief of the Nabha — Hamir Singh.

In 1809, with the power of Ranjit Singh expanding, Nabha State fell under the protection of the East India Company. During the Indian rebellion of 1857 the state was loyal to its subsidiary alliance with the British and was granted territory as a reward.[3]

The state entered a period of prosperity under the rule of Hira Singh. The state had built a residence Nabha House in Delhi, also one Nabha House in pilgrimage town of Kurukshetra, situated opposite to the Sannihit Sarovar[4]

In 1947, with the British departure from India, the subsidiary alliance was dissolved and Nabha was briefly fully independent. Its ruler soon decided to sign an instrument of accession, acceding to the new Dominion of India, when the state was combined with other princely states into the Patiala and East Punjab States Union. It later became part of the Indian state of Punjab.