For the village in Leicestershire, England, see Hoby with Rotherby. 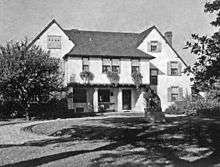 Ragdale is the summer retreat of Chicago architect Howard Van Doren Shaw, located in Lake Forest, Illinois. It is also the home of the Ragdale Foundation. Built in 1897, the house and barn were built in Shaw's typical Arts and Crafts manner.[2]

—Alice Hayes and Susan Moon, Ragdale: A History and Guide.[3]

The property underwent another change in 1912 as the Ragdale Ring was installed; at the outdoor theatre, Shaw's family and friends frequently performed Frances Shaw's works for the Lake Forest community, in the 1930s. Benches were incorporated to accommodate over 200 audience members.

Ragdale was also where Sylvia Shaw Judson (1897–1978), Howard's daughter, sculpted her piece Bird Girl, which is prominently featured on the cover of John Berendt's best-selling novel, Midnight in the Garden of Good and Evil. In 1943, the Meadow Studio was built on the prairie in an effort to accommodate Sylvia's interest as a sculptor; in fact, it was here that she formed the Bird Girl as well as a number of other well-known pieces, such as Cats and Summer.

In 1976 Shaw's granddaughter, poet Alice Judson Hayes (1922–2006), founded The Ragdale Foundation as a non-profit aimed at providing a place of rest and relaxation for artists of all disciplines.

—Alice Hayes, Preface to Ragdale: A History and Guide.[4]

Initially, Judson ran the foundation with little assistance, managing the landscaping, cooking, and facilities on her own.

In 1980, the Ragdale Foundation was able to obtain the Ragdale Barnhouse from the Preston Family, who had purchased it from Shaw's youngest daughter, Theodora, in the late 1940s, then remodeled it in the 1950s. It is within this converted barn that the Foundation offices are housed.

Hayes donated both the buildings and 5 acres (20,000 m2) of grounds in 1986 to the City of Lake Forest, in an effort to preserve the Ragdale property as well as its environmental integrity.

1991 marked itself as yet another year of progress as the Friends' Studio was built. The space provided a workroom to choreographers, visual artists, composers, and performance artists. Additionally, its well-lit area provided a perfect place for exhibitions and performances.

In 2006, the Ragdale Foundation both celebrated its 30th anniversary and mourned the death of Alice Judson Hayes.

On April 9, 2008, the Meadow Studio was reopened, after having been the workspace of Sylvia Shaw Judson. Partnering with 12 fourth- and fifth-year students from the Illinois Institute of Technology College of Architecture under the direction of Associate Professor Frank Flurry, the Foundation was able to utilize the original footprint of the building in constructing a building light on environmental impact. Due to poor roof maintenance in the studio's early years, it was subject to extensive damage—however, the Ragdale Foundation was fortunate in attaining the funds necessary to rebuild it.[5]

The Foundation currently hosts artists from a number of disciplines: nonfiction- and fiction-writers, composers, poets, play-and screenwriters, visual artists, choreographers, as well as those from interdisciplinary interests.