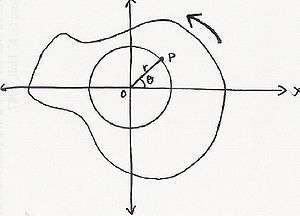 Angular displacement of a body is the angle in radians (degrees, revolutions) through which a point or line has been rotated in a specified sense about a specified axis. When an object rotates about its axis, the motion cannot simply be analyzed as a particle, since in circular motion it undergoes a changing velocity and acceleration at any time (t). When dealing with the rotation of an object, it becomes simpler to consider the body itself rigid. A body is generally considered rigid when the separations between all the particles remains constant throughout the objects motion, so for example parts of its mass are not flying off. In a realistic sense, all things can be deformable, however this impact is minimal and negligible. Thus the rotation of a rigid body over a fixed axis is referred to as rotational motion.

In the example illustrated to the right (or above in some mobile versions) , a particle on object P is at a fixed distance r from the origin, O, rotating counterclockwise. It becomes important to then represent the position of particle P in terms of its polar coordinates (r, θ). In this particular example, the value of θ is changing, while the value of the radius remains the same. (In rectangular coordinates (x, y) both x and y vary with time). As the particle moves along the circle, it travels an arc length s, which becomes related to the angular position through the relationship:

Angular displacement may be measured in radians or degrees. If using radians, it provides a very simple relationship between distance traveled around the circle and the distance r from the centre.

For example if an object rotates 360 degrees around a circle of radius r, the angular displacement is given by the distance traveled around the circumference - which is 2πr divided by the radius:

which easily simplifies to

When object travels from point P to point Q, as it does in the illustration to the left, over

the radius of the circle goes around a change in angle.

which equals the Angular Displacement. 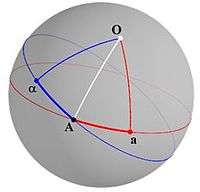 Figure 1: Euler's rotation theorem. A great circle transforms to another great circle under rotations, leaving always a diameter of the sphere in its original position Figure 2: A rotation represented by an Euler axis and angle

In three dimensions, angular displacement is an entity with a direction and a magnitude. The direction specifies the axis of rotation, which always exists by virtue of the Euler's rotation theorem; the magnitude specifies the rotation in radians about that axis (using the right-hand rule to determine direction). This entity is called an axis-angle.

Despite having direction and magnitude, angular displacement is not a vector because it does not obey the commutative law for addition.[1] Nevertheless, when dealing with infinitesimal rotations, second order infinitesimals can be discarded and in this case commutativity appears.

Several ways to describe angular displacement exist, like rotation matrices or Euler angles. See charts on SO(3) for others.

two matrices, the angular displacement matrix between them can be obtained as

. When this product is performed having a very small difference between both frames we will obtain a matrix close to the identity.

In the limit, we will have an infinitesimal rotation matrix.

We can introduce here the infinitesimal angular displacement tensor or rotation generator associated:

Such that its associated rotation matrix is

. When it is divided by the time, this will yield the angular velocity vector.

A finite rotation through angle θ about this axis may be seen as a succession of small rotations about the same axis. Approximating Δθ  as θ/N where N  is a large number, a rotation of θ about the axis may be represented as:

It can be seen that Euler's theorem essentially states that all rotations may be represented in this form. The product

is the "generator" of the particular rotation, being the vector (x,y,z) associated with the matrix A. This shows that the rotation matrix and the axis-angle format are related by the exponential function.

One can derive a simple expression for the generator G. One starts with an arbitrary plane[2] defined by a pair of perpendicular unit vectors a and b. In this plane one can choose an arbitrary vector x with perpendicular y. One then solves for y in terms of x and substituting into an expression for a rotation in a plane yields the rotation matrix R which includes the generator G = baT - abT.

To include vectors outside the plane in the rotation one needs to modify the above expression for R by including two projection operators that partition the space. This modified rotation matrix can be rewritten as an exponential function.

The matrices in the Lie algebra are not themselves rotations; the skew-symmetric matrices are derivatives, proportional differences of rotations. An actual "differential rotation", or infinitesimal rotation matrix has the form

where dθ is vanishingly small and A ∈ so(n), for instance with A = Lx,

Connecting the Lie algebra to the Lie group is the exponential map, which is defined using the standard matrix exponential series for eA[4] For any skew-symmetric matrix A, exp(A) is always a rotation matrix.[nb 1]

By the properties of the identification su(2) ≅ ℝ3, u is in the null space of A. Thus, u is left invariant by exp(A) and is hence a rotation axis.

This is the matrix for a rotation around axis u by the angle θ in half-angle form. For full detail, see exponential map SO(3).