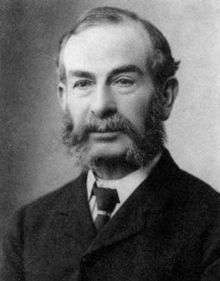 In the case of Lagrangian mechanics, the generalized coordinates q1, q2, ... and the corresponding velocities dq1/dt, dq2/dt, ..., and possibly time[nb 1] t, enter the Lagrangian,

where the overdots denote time derivatives.

where the second equation is the definition of the generalized momentum pi corresponding to the coordinate qi (partial derivatives are denoted using ∂). The velocities dqi/dt are expressed as functions of their corresponding momenta by inverting their defining relation. In this context, pi is said to be the momentum "canonically conjugate" to qi.

where again the generalized velocity dqi/dt is to be expressed as a function of generalized momentum pi via its defining relation. The choice of which n coordinates are to have corresponding momenta, out of the n + s coordinates, is arbitrary.

The above is used by Landau and Lifshitz, and Goldstein. Some authors may define the Routhian to be the negative of the above definition.[3]

where · is the dot product defined on the tuples, for the specific example appearing here:

For reference, the Lagrangian equations for s degrees of freedom are a set of s coupled second order ordinary differential equations in the coordinates

where j = 1, 2, ..., s, and the Hamiltonian equations for n degrees of freedom are a set of 2n coupled first order ordinary differential equations in the coordinates and momenta

Below, the Routhian equations of motion are obtained in two ways, in the process other useful derivatives are found that can be used elsewhere.

The differential of L is

Now change variables, from the set (q, ζ, dq/dt, dζ/dt) to (q, ζ, p, dζ/dt), simply switching the velocity dq/dt to the momentum p. This change of variables in the differentials is the Legendre transformation. The differential of the new function to replace L will be a sum of differentials in dq, dζ, dp, d(dζ/dt), and dt. Using the definition of generalized momentum and Lagrange's equation for the coordinate q:

to obtain the differential of a new function in terms of the new set of variables:

where again the velocity dq/dt is a function of the momentum p, we have

but from the above definition, the differential of the Routhian is

Comparing the coefficients of the differentials dq, dζ, dp, d(dζ/dt), and dt, the results are Hamilton's equations for the coordinate q,

and Lagrange's equation for the coordinate ζ

and taking the total time derivative of the second equation and equating to the first. Notice the Routhian replaces the Hamiltonian and Lagrangian functions in all the equations of motion.

Any number of degrees of freedom

For n + s coordinates as defined above, with Routhian

the equations of motion can be derived by a Legendre transformation of this Routhian as in the previous section, but another way is to simply take the partial derivatives of R with respect to the coordinates qi and ζj, momenta pi, and velocities dζj/dt, where i = 1, 2, ..., n, and j = 1, 2, ..., s. The derivatives are

The first two are identically the Hamiltonian equations. Equating the total time derivative of the fourth set of equations with the third (for each value of j) gives the Lagrangian equations. The fifth is just the same relation between time partial derivatives as before. To summarize[5]

The total number of equations is 2n + s, there are 2n Hamiltonian equations plus s Lagrange equations.

Since the Lagrangian has the same units as energy, the units of the Routhian are also energy. In SI units this is the Joule.

(If there are external fields interacting with the constituents of the system, they can vary throughout space but not time). This expression requires the partial derivatives of L with respect to all the velocities dqi/dt and dζj/dt. Under the same condition of R being time independent, the energy in terms of the Routhian is a little simpler, substituting the definition of R and the partial derivatives of R with respect to the velocities dζj/dt,

Notice only the partial derivatives of R with respect to the velocities dζj/dt are needed. In the case that s = 0 and the Routhian is explicitly time-independent, then E = R, that is, the Routhian equals the energy of the system. The same expression for R in when s = 0 is also the Hamiltonian, so in all E = R = H.

If the Routhian has explicit time dependence, the total energy of the system is not constant. The general result is

which can be derived from the total time derivative of R in the same way as for L.

where the αi are constants. With these constants substituted into the Routhian, R is a function of only the non cyclic coordinates and velocities (and in general time also)

The 2n Hamiltonian equations in the cyclic coordinates automatically vanish,

and the s Lagrangian equations are in the non cyclic coordinates

The Routhian method does not guarantee the equations of motion will be simple, however it will lead to fewer equations.

One general class of mechanical systems with cyclic coordinates are those with central potentials, because potentials of this form only have dependence on radial separations and no dependence on angles.

Consider a particle of mass m under the influence of a central potential V(r) in spherical polar coordinates (r, θ, φ)

Notice φ is cyclic, because it does not appear in the Lagrangian. The momentum conjugate to φ is the constant

in which r and dφ/dt can vary with time, but the angular momentum pφ is constant. The Routhian can be taken to be

We can solve for r and θ using Lagrange's equations, and do not need to solve for φ since it is eliminated by Hamiltonian's equations. The r equation is

and the θ equation is

The r equation is

the θ equation is

the φ equation is 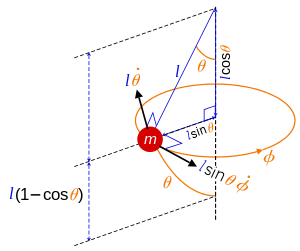 Consider the spherical pendulum, a mass m (known as a "pendulum bob") attached to a rigid rod of length l of negligible mass, subject to a local gravitational field g. The system rotates with angular velocity dφ/dt which is not constant. The angle between the rod and vertical is θ and is not constant.

The θ equation is found from the Lagrangian equations

or simplifying by introducing the constants

This equation resembles the simple nonlinear pendulum equation, because it can swing through the vertical axis, with an additional term to account for the rotation about the vertical axis (the constant a is related to the angular momentum pφ).

Applying the Lagrangian approach there are two nonlinear coupled equations to solve.

The θ equation is

and the φ equation is 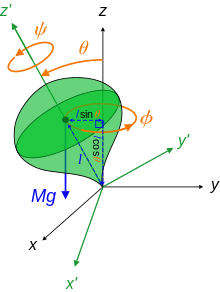 Heavy symmetric top in terms of the Euler angles.

The heavy symmetrical top of mass M has Lagrangian[7][8]

The angles ψ, φ are cyclic. The constant momenta are the angular momenta of the top about its axis and its precession about the vertical, respectively:

and to eliminate dφ/dt, substitute this result into pψ and solve for dψ/dt to find

The Routhian can be taken to be

The first term is constant, and can be ignored since only the derivatives of R will enter the equations of motion. The simplified Routhian, without loss of information, is thus

The equation of motion for θ is, by direct calculation,

or by introducing the constants

a simpler form of the equation is obtained

Although the equation is highly nonlinear, there is only one equation to solve for, it was obtained directly, and the cyclic coordinates are not involved.

By contrast, the Lagrangian approach leads to three nonlinear coupled equations to solve, despite the absence of the coordinates ψ and φ in the Lagrangian.

The θ equation is

the ψ equation is

and the φ equation is 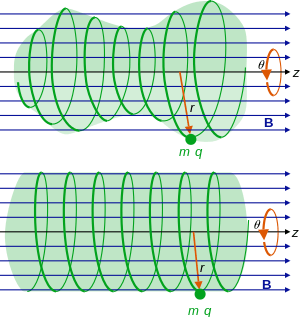 Classical charged particle in uniform B field, using cylindrical coordinates. Top: If the radial coordinate r and angular velocity dθ/dt vary, the trajectory is a helicoid with varying radius but uniform motion in the z direction. Bottom: Constant r and dθ/dt means a helicoid with constant radius.

It is convenient to use cylindrical coordinates (r, θ, z), so that

In this case the electric potential is zero, φ = 0, and we can choose the axial gauge for the magnetic potential

and the Lagrangian is

Notice this potential has an effectively cylindrical symmetry (although it also has angular velocity dependence), since the only spatial dependence is on the radial length from an imaginary cylinder axis.

There are two cyclic coordinates, θ and z. The canonical momenta conjugate to θ and z are the constants

so the velocities are

The angular momentum about the z axis is not pθ, but the quantity mr2dθ/dt, which is not conserved due to the contribution from the magnetic field. The canonical momentum pθ is the conserved quantity. It is still the case that pz is the linear or translational momentum along the z axis, which is also conserved.

The radial component r and angular velocity dθ/dt can vary with time, but pθ is constant, and since pz is constant it follows dz/dt is constant. The Routhian can take the form

where in the last line, the pz2/2m term is a constant and can be ignored without loss of continuity. The Hamiltonian equations for θ and z automatically vanish and do not need to be solved for. The Lagrangian equation in r

is by direct calculation

and simplifying further by introducing the constants

the differential equation is

To see how z changes with time, integrate the momenta expression for pz above

where cz is an arbitrary constant, the initial value of z to be specified in the initial conditions.

The motion of the particle in this system is helicoidal, with the axial motion uniform (constant) but the radial and angular components varying in a spiral according to the equation of motion derived above. The initial conditions on r, dr/dt, θ, dθ/dt, will determine if the trajectory of the particle has a constant r or varying r. If initially r is nonzero but dr/dt = 0, while θ and dθ/dt are arbitrary, then the initial velocity of the particle has no radial component, r is constant, so the motion will be in a perfect helix. If r is constant, the angular velocity is also constant according to the conserved pθ.

With the Lagrangian approach, the equation for r would include dθ/dt which has to be eliminated, and there would be equations for θ and z to solve for.

The r equation is

the θ equation is

and the z equation is

The z equation is trivial to integrate, but the r and θ equations are not, in any case the time derivatives are mixed in all the equations and must be eliminated.