The Koopman–von Neumann mechanics is a description of classical mechanics in terms of Hilbert space, introduced by Bernard Koopman and John von Neumann in 1931 and 1932. [1] [2] [3]

As Koopman and von Neumann demonstrated, a Hilbert space of complex, square integrable wavefunctions can be defined in which classical mechanics can be formulated as an operatorial theory similar to quantum mechanics.

The origins of Koopman–von Neumann (KvN) theory are tightly connected with the rise of ergodic theory as an independent branch of mathematics, in particular with Boltzmann's ergodic hypothesis.

In 1931 Koopman and André Weil independently observed that the phase space of the classical system can be converted into a Hilbert space by postulating a natural integration rule over the points of the phase space as the definition of the scalar product, and that this transformation allows drawing of interesting conclusions about the evolution of physical observables from Stone's theorem, which had been proved shortly before. This finding inspired von Neumann to apply the novel formalism to the ergodic problem. Already in 1932 he completed the operator reformulation of quantum mechanics currently known as Koopman–von Neumann theory. Subsequently he published several seminal results in modern ergodic theory including the proof of his mean ergodic theorem.

Derivation starting from the Liouville equation

In the approach of Koopman and von Neumann (KvN), dynamics in phase space is described by a (classical) probability density, recovered from an underlying wavefunction – the Koopman–von Neumann wavefunction – as the square of its absolute value (more precisely, as the amplitude multiplied with its own complex conjugate). This stands in analogy to the Born rule in quantum mechanics. In the KvN framework, observables are represented by commuting self-adjoint operators acting on the Hilbert space of KvN wavefunctions. The commutativity physically implies that all observables are simultaneously measurable. Contrast this with quantum mechanics, where observables need not commute, which underlines the uncertainty principle, Kochen–Specker theorem, and Bell inequalities.[4]

Dynamics of the probability density (proof)

denotes the classical Hamiltonian. The same dynamical equation is postulated for the KvN wavefunction

and for its complex conjugate

follows using the product rule that

which proves that probability density dynamics can be recovered from the KvN wavefunction.

The last step of this derivation relies on the classical Liouville operator containing only first-order derivatives in the coordinate and momentum; this is not the case in quantum mechanics where the Schrödinger equation contains second-order derivatives. [5] [6]

Conversely, it is possible to start from operator postulates, similar to the Hilbert space axioms of quantum mechanics, and derive the equation of motion by specifying how expectation values evolve.[7]

The relevant axioms are that as in quantum mechanics (i) the states of a system are represented by normalized vectors of a complex Hilbert space, and the observables are given by self-adjoint operators acting on that space, (ii) the expectation value of an observable is obtained in the manner as the expectation value in quantum mechanics, (iii) the probabilities of measuring certain values of some observables are calculated by the Born rule, and (iv) the state space of a composite system is the tensor product of the subsystem's spaces.

Mathematical form of the operator axioms

The above axioms (i) to (iv), with the inner product written in the bra–ket notation, are

,
(ii) The expectation value of an observable

(iii) The probability that a measurement of an observable

. (This axiom is an analogue of the Born rule in quantum mechanics.[8])
(iv) (see Tensor product of Hilbert spaces).

These axioms allow us to recover the formalism of both classical and quantum mechanics.[7] Specifically, under the assumption that the classical position and momentum operators commute, the Liouville equation for the KvN wavefunction is recovered from averaged Newton's laws of motion. However, if the coordinate and momentum obey the canonical commutation relation, the Schrödinger equation of quantum mechanics is obtained.

aka, Newton's laws of motion averaged over ensemble. With the help of the operator axioms, they can be rewritten as

Notice a close resemblance with Ehrenfest theorems in quantum mechanics. Applications of the product rule leads to

into which we substitute a consequence of Stone's theorem

Since these identities must be valid for any initial state, the averaging can be dropped and the system of commutator equations for the unknown

Assume that the coordinate and momentum commute

. This assumption physically means that the classical particle's coordinate and momentum can be measured simultaneously, implying absence of the uncertainty principle.

cannot be simply of the form

because it would imply the contractions

. Therefore, we must utilize additional operators

The need to employ these auxiliary operators arises because all classical observables commute. Now we seek

. Utilizing KvN algebra, the commutator eqs for L can be converted into the following differential equations

Whence, we conclude that the classical KvN wave function

evolves according to the Schrödinger-like equation of motion

Let us explicitly show that KvN dynamical eq is equivalent to the classical Liouville mechanics.

with the resolution of the identity

Then, one obtains from equation (KvN algebra)

, we get the equation of motion for the KvN wave function in the xp-representation

. According to the axioms above, the probability density is given by

as well as (KvN dynamical eq in xp), we recover the classical Liouville equation

Moreover, according to the operator axioms and (xp eigenvec),

Therefore, the rule for calculating averages of observable

. As a result, the phase of a classical wave function does not contribute to observable averages. Contrary to quantum mechanics, the phase of a KvN wave function is physically irrelevant. Hence, nonexistence of the double-slit experiment[6][10][11] as well as Aharonov–Bohm effect[12] is established in the KvN mechanics.

Projecting KvN dynamical eq onto the common eigenvector of the operators

-representation), one obtains classical mechanics in the doubled configuration space,[13] whose generalization leads [13] [14] [15] [16] [17] to the phase space formulation of quantum mechanics.

As in the derivation of classical mechanics, we begin from the following equations for averages of coordinate x and momentum p

With the help of the operator axioms, they can be rewritten as

These are the Ehrenfest theorems in quantum mechanics. Applications of the product rule leads to

into which we substitute a consequence of Stone's theorem

was introduced as a normalization constant to balance dimensionality. Since these identities must be valid for any initial state, the averaging can be dropped and the system of commutator equations for the unknown quantum generator of motion

Contrary to the case of classical mechanics, we assume that observables of the coordinate and momentum obey the canonical commutation relation

, the commutator equations can be converted into the differential equations [7][9]

whose solution is the familiar quantum Hamiltonian

Whence, the Schrödinger equation was derived from the Ehrenfest theorems by assuming the canonical commutation relation between the coordinate and momentum. This derivation as well as the derivation of classical KvN mechanics shows that the difference between quantum and classical mechanics essentially boils down to the value of the commutator

In the Hilbert space and operator formulation of classical mechanics, the Koopman von Neumann–wavefunction takes the form of a superposition of eigenstates, and measurement collapses the KvN wavefunction to the eigenstate which is associated the measurement result, in analogy to the wave function collapse of quantum mechanics.

However, it can be shown that for Koopman–von Neumann classical mechanics non-selective measurements leave the KvN wavefunction unchanged.[5]

The KvN dynamical equation (KvN dynamical eq in xp) and Liouville equation (Liouville eq) are first-order linear partial differential equations. One recovers Newton's laws of motion by applying the method of characteristics to either of these equations. Hence, the key difference between KvN and Liouville mechanics lies in weighting individual trajectories: Arbitrary weights, underlying the classical wave function, can be utilized in the KvN mechanics, while only positive weights, representing the probability density, are permitted in the Liouville mechanics (see this scheme). 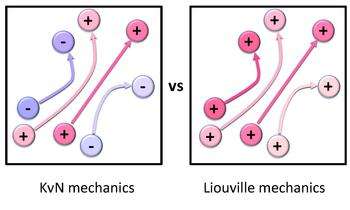 The essential distinction between KvN and Liouville mechanics lies in weighting (coloring) individual trajectories: Any weights can be utilized in KvN mechanics, while only positive weights are allowed in Liouville mechanics. Particles move along Newtonian trajectories in both cases. (Regarding a dynamical example, see below.)

Being explicitly based on the Hilbert space language, the KvN classical mechanics adopts many techniques from quantum mechanics, for example, perturbation and diagram techniques [18] as well as functional integral methods [19] [20] .[21] The KvN approach is very general, and it has been extended to dissipative systems,[22] relativistic mechanics,[23] and classical field theories [7] [24] [25] .[26]

The KvN approach is fruitful in studies on the quantum-classical correspondence [7] [8] [27] [28] [29] as it reveals that the Hilbert space formulation is not exclusively quantum mechanical. Even Dirac spinors are not exceptionally quantum as they are utilized in the relativistic generalization of the KvN mechanics.[23] Similarly as the more well-known phase space formulation of quantum mechanics, the KvN approach can be understood as an attempt to bring classical and quantum mechanics into a common mathematical framework. In fact, the time evolution of the Wigner function approaches, in the classical limit, the time evolution of the KvN wavefunction of a classical particle. [23] [30] However, a mathematical resemblance to quantum mechanics does not imply the presence of hallmark quantum effects. In particular, impossibility of double-slit experiment[6][10][11] and Aharonov–Bohm effect[12] are explicitly demonstrated in the KvN framework.