This article summarizes the terminology, quantities and equations in the subject; details and derivations can be found in the linked main articles.

By contrast, analytical mechanics uses scalar properties of motion representing the system as a whole—usually its total kinetic energy and its potential energy—not Newton's vectorial forces of individual particles.[1] A scalar is a quantity, whereas a vector is represented by quantity and direction. The equations of motion are derived from the scalar quantity by some underlying principle about the scalar's variation.

Analytical mechanics takes advantage of a system's constraints to solve problems. The constraints limit the degrees of freedom the system can have, and can be used to reduce the number of coordinates needed to solve for the motion. The formalism is well suited to arbitrary choices of coordinates, known in the context as generalized coordinates. The kinetic and potential energies of the system are expressed using these generalized coordinates or momenta, and the equations of motion can be readily set up, thus analytical mechanics allows numerous mechanical problems to be solved with greater efficiency than fully vectorial methods. It does not always work for non-conservative forces or dissipative forces like friction, in which case one may revert to Newtonian mechanics, or use the Udwadia–Kalaba equation.

Two dominant branches of analytical mechanics are Lagrangian mechanics (using generalized coordinates and corresponding generalized velocities in configuration space), and Hamiltonian mechanics (using coordinates and corresponding momenta in phase space). Both formulations are equivalent by a Legendre transformation on the generalized coordinates, velocities, and momenta, therefore both contain the same information for describing the dynamics of a system. There are other formulations such as Hamilton–Jacobi theory, Routhian mechanics, and Appell's equation of motion. All equations of motion for particles and fields, in any formalism, can be derived from the widely applicable result called the principle of least action. One result is Noether's theorem, a statement which connects conservation laws to their associated symmetries.

Analytical mechanics does not introduce new physics and is not more general than Newtonian mechanics. Rather it is a collection of equivalent formalisms which have broad application. In fact the same principles and formalisms can be used in relativistic mechanics and general relativity, and with some modification, quantum mechanics and quantum field theory also.

In Newtonian mechanics, one customarily uses all three Cartesian coordinates, or other 3D coordinate system, to refer to a body's position during its motion. In physical systems, however, some structure or other system usually constrains the body's motion from taking certain directions and pathways. So a full set of Cartesian coordinates is often unneeded, as the constraints determine the evolving relations among the coordinates, which relations can be modeled by equations corresponding to the constraints. In the Lagrangian and Hamiltonian formalisms, the constraints are incorporated into the motion's geometry, reducing the number of coordinates to the minimum needed to model the motion. These are known as generalized coordinates, denoted qi (i = 1, 2, 3...).[2]

Difference between curvillinear and generalized coordinates

For a system with N degrees of freedom, the generalized coordinates can be collected into an N-tuple:

and the time derivative (here denoted by an overdot) of this tuple give the generalized velocities:

The foundation which the subject is built on is D'Alembert's principle.

where T is the total kinetic energy of the system, and the notation

is a useful shorthand (see matrix calculus for this notation).

and this relation holds for all times t, then q are called Holonomic constraints.[4] Vector r is explicitly dependent on t in cases when the constraints vary with time, not just because of q(t). For time-independent situations, the constraints are also called scleronomic, for time-dependent cases they are called rheonomic.[3]

The introduction of generalized coordinates and the fundamental Lagrangian function:

where T is the total kinetic energy and V is the total potential energy of the entire system, then either following the calculus of variations or using the above formula - lead to the Euler–Lagrange equations;

which are a set of N second-order ordinary differential equations, one for each qi(t).

This formulation identifies the actual path followed by the motion as a selection of the path over which the time integral of kinetic energy is least, assuming the total energy to be fixed, and imposing no conditions on the time of transit.

The Lagrangian formulation uses the configuration space of the system, the set of all possible generalized coordinates:

is N-dimensional real space (see also set-builder notation). The particular solution to the Euler–Lagrange equations is called a (configuration) path or trajectory, i.e. one particular q(t) subject to the required initial conditions. The general solutions form a set of possible configurations as functions of time:

The configuration space can be defined more generally, and indeed more deeply, in terms of topological manifolds and the tangent bundle.

and introduces the Hamiltonian (which is in terms of generalized coordinates and momenta):

where • denotes the dot product, also leading to Hamilton's equations:

which are now a set of 2N first-order ordinary differential equations, one for each qi(t) and pi(t). Another result from the Legendre transformation relates the time derivatives of the Lagrangian and Hamiltonian:

which is often considered one of Hamilton's equations of motion additionally to the others. The generalized momenta can be written in terms of the generalized forces in the same way as Newton's second law:

Analogous to the configuration space, the set of all momenta is the momentum space (technically in this context; generalized momentum space):

"Momentum space" also refers to "k-space"; the set of all wave vectors (given by De Broglie relations) as used in quantum mechanics and theory of waves: this is not referred to in this context.

The set of all positions and momenta form the phase space;

that is, the Cartesian product × of the configuration space and generalized momentum space.

A particular solution to Hamilton's equations is called a phase path, a particular curve (q(t),p(t)) subject to the required initial conditions. The set of all phase paths, the general solution to the differential equations, is the phase portrait:

Calculating the total derivative of one of these, say A, and substituting Hamilton's equations into the result leads to the time evolution of A:

This equation in A is closely related to the equation of motion in the Heisenberg picture of quantum mechanics, in which classical dynamical variables become quantum operators (indicated by hats (^)), and the Poission bracket is replaced by the commutator of operators via Dirac's canonical quantization:

Properties of the Lagrangian and Hamiltonian functions

Following are overlapping properties between the Lagrangian and Hamiltonian functions.[3][5]

so each Lagrangian L and L' describe exactly the same motion. In other words, the Lagrangian of a system is not unique.

(K is a frequently used letter in this case). This property is used in canonical transformations (see below).

Such coordinates are "cyclic" or "ignorable". It can be shown that the Hamiltonian is also cyclic in exactly the same generalized coordinates.

where λ is a constant, then the Hamiltonian will be the total conserved energy, equal to the total kinetic and potential energies of the system:

This is the basis for the Schrödinger equation, inserting quantum operators directly obtains it. 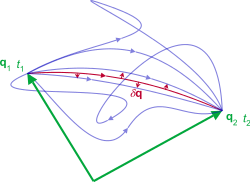 Action is another quantity in analytical mechanics defined as a functional of the Lagrangian:

A general way to find the equations of motion from the action is the principle of least action:[7]

where the departure t1 and arrival t2 times are fixed.[1] The term "path" or "trajectory" refers to the time evolution of the system as a path through configuration space

, in other words q(t) tracing out a path in

. The path for which action is least is the path taken by the system.

From this principle, all equations of motion in classical mechanics can be derived. This approach can be extended to fields rather than a system of particles (see below), and underlies the path integral formulation of quantum mechanics,[8][9] and is used for calculating geodesic motion in general relativity.[10]

The invariance of the Hamiltonian (under addition of the partial time derivative of an arbitrary function of p, q, and t) allows the Hamiltonian in one set of coordinates q and momenta p to be transformed into a new set Q = Q(q, p, t) and P = P(q, p, t), in four possible ways:

With the restriction on P and Q such that the transformed Hamiltonian system is:

the above transformations are called canonical transformations, each function Gn is called a generating function of the "nth kind" or "type-n". The transformation of coordinates and momenta can allow simplification for solving Hamilton's equations for a given problem.

The choice of Q and P is completely arbitrary, but not every choice leads to a canonical transformation. One simple criterion for a transformation q → Q and p → P to be canonical is the Poisson bracket be unity,

By setting the canonically transformed Hamiltonian K = 0, and the type-2 generating function equal to Hamilton's principal function (also the action

) plus an arbitrary constant C:

and P is constant, then the Hamiltonian-Jacobi equation (HJE) can be derived from the type-2 canonical transformation:

where H is the Hamiltonian as before:

used to solve the HJE by additive separation of variables for a time-independent Hamiltonian H.

Routhian mechanics is a hybrid formulation of Lagrangian and Hamiltonian mechanics, not often used but especially useful for removing cyclic coordinates. If the Lagrangian of a system has s cyclic coordinates q = q1, q2, ... qs with conjugate momenta p = p1, p2, ... ps, with the rest of the coordinates non-cyclic and denoted ζ = ζ1, ζ1, ..., ζN − s, they can be removed by introducing the Routhian:

which leads to a set of 2s Hamiltonian equations for the cyclic coordinates q,

Set up in this way, although the Routhian has the form of the Hamiltonian, it can be thought of a Lagrangian with N − s degrees of freedom.

as well as generalized forces mentioned above in D'Alembert's principle. The equations are

Generalized coordinates apply to discrete particles. For N scalar fields φi(r, t) where i = 1, 2, ... N, the Lagrangian density is a function of these fields and their space and time derivatives, and possibly the space and time coordinates themselves:

and the Euler–Lagrange equations have an analogue for fields:

where ∂μ denotes the 4-gradient and the summation convention has been used. For N scalar fields, these Lagranian field equations are a set of N second order partial differential equations in the fields, which in general will be coupled and nonlinear.

This scalar field formulation can be extended to vector fields, tensor fields, and spinor fields.

Originally developed for classical fields, the above formulation is applicable to all physical fields in classical, quantum, and relativistic situations: such as Newtonian gravity, classical electromagnetism, general relativity, and quantum field theory. It is a question of determining the correct Lagrangian density to generate the correct field equation.

is defined by analogy with mechanics:

The equations of motion are:

where the variational derivative

must be used instead of merely partial derivatives. For N fields, these Hamiltonian field equations are a set of 2N first order partial differential equations, which in general will be coupled and nonlinear.

Each transformation can be described by an operator (i.e. function acting on the position r or momentum p variables to change them). The following are the cases when the operator does not change r or p, i.e. symmetries.[8]

where R(n̂, θ) is the rotation matrix about an axis defined by the unit vector n̂ and angle θ.

the Lagrangian describes the same motion independent of s, which can be length, angle of rotation, or time. The corresponding momenta to q will be conserved.[3]