For other uses, see Sanyo (disambiguation).

Sanyo Electric Co., Ltd. (三洋電機株式会社, San'yō Denki Kabushiki-gaisha) is a Japanese major electronics company and formerly a member of the Fortune Global 500 whose headquarters was located in Moriguchi, Osaka prefecture, Japan. Sanyo had over 230 subsidiaries and affiliates.[2] Sanyo was founded by Toshio Iue.

Sanyo utilizes an extensive socialization process for new employees, so that they will be acclimatized to Sanyo's corporate culture.[5] New employees take a five-month course during which they eat together and share company-provided sleeping accommodation. They learn everything from basic job requirements to company expectations for personal grooming and the appropriate way in which to address their coworkers and superiors. 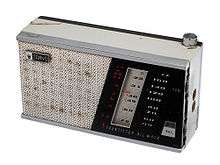 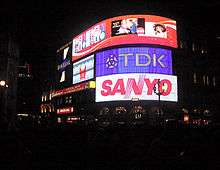 Sanyo was founded when Toshio Iue (井植 歳男, Iue Toshio, 1902–1969), the brother-in-law of Konosuke Matsushita and also a former Matsushita employee, was lent an unused Matsushita plant in 1947 and used it to make bicycle generator lamps. Sanyo was incorporated in 1950; in 1952 it made Japan's first plastic radio and in 1954 Japan's first pulsator-type washing machine.[2] The company's name means three oceans in Japanese, referring to the founder's ambition to sell their products worldwide, across the Atlantic, Pacific, and Indian oceans.

This ambition was realized in the late 70's, when Sanyo introduced car stereos and home electronics to the North American consumer market and embarked on a heavy television-based advertising campaign. Sanyo expanded their North American presence with the purchase of Whirlpool Corporation's television business, Warwick Electronics, which manufactured televisions for Sears.[6]

In 1984, Sanyo introduced the MBC-550 PC, the lowest-cost IBM PC compatible personal computer available at the time,[7] but lack of full compatibility drove Sanyo from the market and no follow-on models were released.

Technologically Sanyo has had good ties with Sony, supporting the Betamax video format from invention until the mid-1980s (the best selling video recorder in the UK in 1983 was the Sanyo VTC5000), while producing the VHS video format at the same time for the Fisher brand during the early-1980s, and later being an early adopter of the highly successful Video8 camcorder format. More recently, though, Sanyo decided against supporting Sony's format, the Blu-ray Disc, and instead gave its backing to Toshiba's HD DVD. This was ultimately unsuccessful, however, as Sony's Blu-ray triumphed.[8]

Sanyo posted signs of recovery after the announcement of positive operating income of 2.6 billion yen. Sanyo remains the world number one producer of rechargeable batteries. Recent product innovations in this area include the Eneloop Low self-discharge NiMH battery, a "hybrid" rechargeable NiMH (Nickel-metal hydride battery) which, unlike typical NiMH cells, can be used from-the-package without an initial recharge cycle and retain a charge significantly longer than batteries using standard NiMH battery design. The Eneloop line competes against similar products such as Rayovac's "Hybrid Rechargeable" line.

Tomoyo Nonaka, a former NHK anchorwoman who was appointed Chairman of the company, stepped down in March 2007.[10] The President, Toshimasa Iue, also stepped down in April of that year; Seiichiro Sano was appointed to head the company effective April 2007. In October 2007, Sanyo cancelled a 110 billion yen ( million) sale of its semiconductor business, blaming the global credit crisis for the decision and stating that after exploring its other options, it had decided to keep the business and develop it as part of its portfolio.[11]

On April 1, 2008, they sold their cell phone division to Kyocera, laying off a third of their U.S. employees.

In 2010, Sanyo sold its semiconductor operations to ON Semiconductor. [14]

By March 2012, parent company Panasonic plans to terminate the Sanyo brand, however it will remain on some of the products where the Sanyo brand still holds value to consumers.[18]

Plans to expand production were based on rising demands for Sanyo Hungary products, whose leading markets are Germany, Italy, Spain and the Scandinavian countries. The plant at Dorog, outside Budapest, will be Sanyo Electric's largest facility producing solar modules in the entire world.[21]

In late September 2008, Sanyo Electric Company, Ltd. announced its decision to build a manufacturing plant for solar ingots and wafers (the building blocks for silicon solar cells) in Inagi, Tokyo. The plant will begin operating in October 2009 and will reach its full production capacity of 70 megawatts (MW) of solar wafers per year by April 2010. Sanyo and Nippon Oil have decided to launch a joint company for the production and sale of thin-film solar panels, to be named Sanyo Eneos Solar Co., Ltd. The new joint company will start production and sales at an initial scale of 80 MW and gradually increase its production capacity. For this joint project, Sanyo will draw on its solar cell technologies, based on the technology acquired through the development of the HIT Solar Cell.[22]

Sanyo Electric is also responsible for the construction of the Solar Ark.

Sanyo Electric plans to raise monthly production of NiMH batteries for hybrid vehicles from the current 1 million units to up to 2.5 million by the end of fiscal 2005.[25]

Though founded in Japan, Sanyo Electric Co Ltd. has sold TVs in America for over 50 years; Sanyo TV is currently headquartered in San Diego, California with facilities located in Tijuana, Mexico. Because of its relatively high price compared to competitors, Sanyo competes on quality and value. TopTenReviews.com quotes Sanyo as producing LCD TVs "...with one of the best pictures, great sound and all the high-quality specs you expect from a top LCD TV," earning the website's 2014 Gold Award.[26]

Many of Sanyo's television sets also offer MHL compatibility along with ROKU READY branding via HDMI, meaning the TVs are compatible with Roku's MHL-specific streaming stick. This stick, sometimes included with purchase (such as with the Sanyo FVF5044[27]), enables video streaming and other online media access abilities as an affordable alternative to competing comparable Smart TVs; the TV's original remote is capable of browsing the service. Multiple models also possess USB ports which allow for immediate photo sharing ability directly off the stick without any additional software/upgrades.[28]

Sanyo was the major sponsor of the Penrith Panthers Rugby League team in the National Rugby League (Australia) from 1998 to 2011. It is the longest sponsorship of any team in Australian Rugby League history. In football, Sanyo sponsored the Argentine Club Atlético River Plate from 1992 to 1995 and Brazilian Coritiba Foot Ball Club from 1995 to 1999.