Mario Alberto Kempes (born 15 July 1954 in Bell Ville, Córdoba) is a retired Argentine footballer who played as a striker. His father, Mario, also a footballer, inspired him to play from a young age. At the age of seven he began playing with a junior team and at fourteen, he joined the Talleres reserves. A prolific goalscorer, at club level he is best known for playing for Valencia, finishing as La Liga's top goalscorer twice, and amassing 116 goals in 184 league games for the club.

At international level, Kempes was the focal point of Argentina's 1978 World Cup win where he scored twice in the final, and received the Golden Boot as top goalscorer. He also won the Golden Ball for the player of the tournament, making him one of only three players to have won all three awards at a single World Cup, along with Garrincha in 1962, and Paolo Rossi in 1982.

Kempes won South American Footballer of the Year and World Cup Golden Ball in 1978. In 2004 he was named as one of the Top 125 greatest living footballers as part of FIFA's 100th anniversary celebration.[1]

Kempes was nicknamed El Toro and El Matador. During his first stint with Valencia, he won two consecutive Pichichis, scoring 24 and 28 goals in 1976–77 and 1977–78. His career started at local club Instituto, where he played alongside Osvaldo Ardiles before quickly moving on to Rosario Central, where he scored 85 goals in 105 matches and established himself as a notorious goalscorer, which prompted a move to Valencia, where he would go on to win the Copa del Rey, the European Cup Winners' Cup and the UEFA Super Cup. Famous as a hard-working forward, he used to strike from outside the penalty area with his surging runs towards goal and was not the traditional center-forward operating solely inside the box. Many defenders found difficulty handling his attacking style.

Before the 1978 World Cup, Kempes was the only foreign based player on the list of coach César Luis Menotti's national team in Argentina, he was at the time playing for Spanish giants Valencia while the other squad members all played in Argentina. The coach described him when announcing the squad he had selected for the 1978 tournament, "He's strong, he's got skill, he creates spaces and he shoots hard. He's a player who can make a difference, and he can play in a centre-forward position."

Kempes had been the top scorer in La Liga the previous two seasons and was determined to show on home soil that he could deliver against the best on the sport's greatest stage. However, in 1974, at the age of 20, he failed to get on the score-sheet in West Germany and after the first round group stage in 1978, his name was still missing among goal scorers in the tournament. 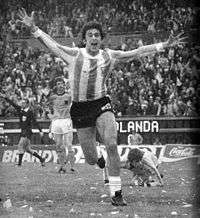 During his club career he won 43 caps for Argentina and scored 20 times. He represented his country in three World Cups in 1974, 1978 and 1982, winning the competition in 1978. He was the leading goalscorer in the 1978 tournament, scoring six goals. Two of these goals were in the final against the Netherlands, which Argentina won 3–1. His second goal, in the 105th minute, was the game winner in extra time. More notoriously in the 1978 cup, Kempes stopped a goal with his hand in a second round match against Poland.[2] This resulted in a penalty kick that was promptly saved by Ubaldo Fillol.[3]

In 1978 he was named South American Football Player of the Year ("El Mundo," Caracas, Venezuela). He was named by Pelé as one of the top 125 greatest living footballers in March 2004.

Kempes made his full-time managing debut in Albania. His brief spell with Lushnja was groundbreaking, as he became the first foreign manager who signed a foreign player for the first time in Albanian football history. His career in Albania came to a quick end in 1997. The following year, he landed a job with Venezuelan side Mineros de Guayana. In 1999, Kempes moved to Bolivia and managed The Strongest, before taking charge of Blooming in 2000. Previously, he worked as assistant coach for Uruguayan manager Héctor Núñez in Valencia, and as a player-manager of Indonesian League champions Pelita Jaya.

He currently works as a football analyst and commentator in Spanish for ESPN Deportes (ESPN's Spanish language version). Moreover, he as well as Fernando Palomo and Ciro Procuna provide the commentary in the Latin American version of the videogames FIFA 13, FIFA 14, FIFA 15 and FIFA 16