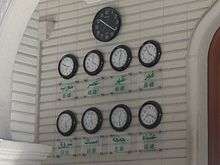 Salah times at Taipei Cultural Mosque in the Republc of China.

Salah times refers to times when Muslims perform prayers (salah). The term is primarily used for the five daily prayers plus the Friday prayer. According to Muslim beliefs, the salat times were taught by Allah to Muhammad.

Prayer times are standard for Muslims in the world, especially the fard prayer times. They depend on the condition of the Sun and geography. There are varying opinions regarding the exact salah times, the schools of Islamic thought differing in minor details. All schools agree that any given prayer cannot be performed before its stipulated time.

The five daily prayers are obligatory (fard) and they are performed at times determined essentially by the position of the Sun in the sky. Hence, salah times vary at different locations on the Earth.

'Fajr' translates to:::: Pre-dawn 'Fajr' Alone translates to:::: Main Fajar begins at subh saadiq - true dawn or morning twilight when the morning light appears across the full width of the sky and ends at sunrise

The Dhuhr prayer starts after the sun passes its zenith, and lasts almost 20 min (approx) before Asr. It's better to say the salah in between 2 hours after the Azan has been announced from Mosque.

Shia (Jafari madhab) differs regarding end of dhuhr time. Per all major Jafari jusrists, end of dhuhr time is about 10 minutes before sunset, the time that belongs exclusively to asr prayer. Dhuhr and asr time overlaps, apart from first 5 minutes of dhuhr, which is exclusively delegated for it. Asr prayer cannot be offered before dhuhr in the dhuhr time...

The Asr prayer starts when the shadow of an object is the same length as the object itself (or, according to Hanafi fiqh, twice its length) plus the shadow length at Dhuhr, and lasts till sunset. Asr can be split into two sections; the preferred time is before the sun starts to turn orange, while the time of necessity is from when the sun turns orange until sunset.

Shia (Jafari madhab) differs regarding start of asr time. Per all major Jafari jusrists, start of asr time is about 5 minutes after the time of sun passing through zenith, that time belongs exclusively to dhuhr prayer. Time for dhuhr and asr prayers overlap, but the dhuhr prayer must be offered before asr, except the time about 10 minutes before sunset, which is delegated exclusively to asr. In the case that the mentioned time is reached, asr prayer should be offered first (ada - on time) and dhuhr (kada - make up, late) prayer should be offered after asr.

The Maghrib prayer begins when the sun sets, and lasts till the red light has left the sky in the west.

The Isha'a prayer starts when the red light is gone from the western sky, and lasts until the rise of the "white light" (fajar sadiq) in the east. The preferred time for Isha'a is before midnight, meaning halfway between sunset and sunrise. 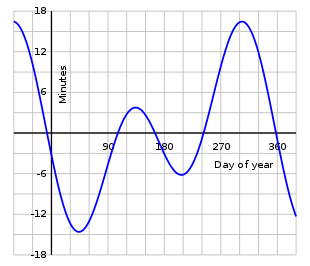 Declination of the sun

In addition to the above measures, to calculate prayer times for a specific location we need its spherical coordinates.[2]

is the time zone, and

are the Longitude and the Latitude of the considered point, respectively.

denotes the Declination of the Sun for a given date.

Technological advances have allowed for products such as software-enhanced azan clocks that use a combination of GPS and microchips to calculate these formulas. This allows Muslims to live further away from mosques than previously possible, as they no longer need to rely solely on a muezzin in order to keep an accurate prayer schedule.[3]

The Friday prayer replaces the dhuhr prayer performed on the other six days of the week. The precise time for this congregational prayer varies with the mosque, but in all cases it must be performed after the dhuhr and before the asr times. If one is unable to join the congregation, then they must pray the dhuhr prayer instead. This salah is compulsory to be done with ja'maat for men. Women have the option to perform Jumm'ah in the mosque or to pray zuhr

Also known as Salat Qiyam Allayl,[4] this Salat is considered a Nafilah (not Fard) and is performed during the month of Ramadan. The prayer is performed after Isha (night) prayer, usually in congregation. Eight to twenty Rakaat are typically performed, however, a short reset is taken after two Rakat.

The Muslims of the community gather to offer their collective prayers for the forgiveness of the dead. This prayer has been generally termed as the Namaze Janaza.The prayer is offered in a particular way with extra (four)Takbirs but there is no Ruku ( bowing ) and Sijdah (prostrating) It becomes obligatory for every Muslim adult male to perform the funeral prayer upon the death of any Muslim, however when it is performed by the few it will not be obligation for all.

Women also can attend the prayer

I intend to offer for Allah, four takbirs of funeral salah, with my praise for Allah and darood for Rasullah and prayer for this deceased person. I adopt Imam as leader and I face towards Ka`ba..

1. The prayer begins with first takbir of Allaho Akbar by Imam, [The Imam must say all the takbeer aloud whereas the muqtadee (followers) must repeat them silently.

When first takbir is said by Imam the followers should repeat the takbir silently and lift both the hand up to the ears, palm facing Qibla and keep the hands under the navel, right hand on top of left. Then recite sana with addition of one word :

Glory be to You Oh Allah, and praise be to You, and blessed is Your name, and exalted is Your Majesty, and there is none to be served besides You.

2. The Imam Say the second takbir of Allaho Akbar,which is followed by the followers, this time no need of raising the hands and then recite both the Durood Sharif

"Oh Allah, send your blessing on Mohammad and the true followers of Mohammad just as you sent blessings on Ibrahim and his true followers. Surely you are praiseworthy, the Great."

3. The Imam Say Allaho Akbar, as the third takbir and is followed by the followers in the same way as it was done at the time of second takbir and then recite following dua silently

The Imam say the takbir of Allaho Akbar, as the fourth takbir, the followers also repeat the same silently and then salutation on right and then left.

This ends the Namaze Janaza for adults.

Up to 3rd Takbir the Namaz is same, thereafter the dua is different :

Dua for male child is as under :

Dua for Female child is as under :