The Zuhr prayer (Arabic: صلاة الظهر‎‎, ṣalāt aẓ-ẓuhr  IPA: [sˤalaːt aðˤðˤuhr], "noon prayer"; also transliterated Duhr or Dhuhr) is the prayer after midday (but before the time for the Asr prayer.) It has been said that the name Dhuhr was given to this prayer because it falls halfway between two daily prayers, those being Fajr (or Fajer) which denotes the beginning of dawn and Isha, the first instant of complete darkness. Performed daily by practicing Muslims, it is the second of the five daily prayers (salat, known to be one of the most important pillars.) The Islamic day begins at Fajr which is the first prayer. The five daily prayers collectively are one of the Five Pillars of Islam in Sunni Islam, and one of the ten Practices of the Religion (furūʿ ad-dīn) (فروع الدين) according to Shia Islam. The Holy Qur'an has reiterated its importance, "Attend constantly to prayers and to the middle prayer and stand up truly obedient to Allah". It is reduced to two rakaʿāt when traveling.

On Friday the Zuhr prayer is replaced by Jumu'ah, it is obligatory for Muslim men who are above the age of puberty to pray in congregation either in the mosque of the city they live in or with a group of Muslims. Women, however, are recommended but not obligated to pray in a congregation on Friday prayer. The Zuhr prayer, on Friday, is led by a Khutba which is a speech given by the leader of the mosque (Imam) with a purpose to educate, bond, guide, and improve the quality of the community as well as propagate Islam (Dawa). 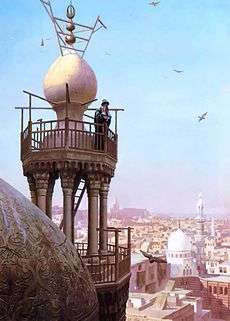 A Muezzin Calling from the Top of a Minaret before Zuhr Prayer.

The following quotations are from books of Sunni hadith. These books relate accounts taken from the life of the Islamic prophet Muhammad, his family, and his companions. They were compiled by Islamic scholars after Muhammad's death. These quotations include information about those who related the accounts, as well as the accounts themselves.

The waqt (prescribed time) of the Zuhr salat is determined differently by the different branches of Islam. In each case, however, it is best to perform the prayer as soon as the waqt is "in", and inadvisable to unnecessarily delay it.

The time frame of the zuhr daily prayer is as follows: