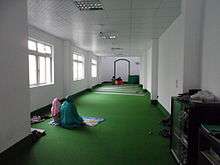 The Asr prayer (Arabic: صلاة العصر‎‎ ṣalāt al-ʿaṣr, "afternoon prayer") is the afternoon daily prayer recited by practising Muslims. It is the third of the five daily prayers (the Islamic date begins at maghrib). The five daily prayers collectively are one pillar of the Five Pillars of Islam, in Sunni Islam, and one of the ten Practices of the Religion (Furū al-Dīn) according to Shia Islam. When travelling, according to some madh'habs, it may be reduced to two rakaʿāt. The Asr daily prayer may be mentioned as the middle prayer in the Qur'an at sura 2 (Al-Baqara), ayat 238,[1] and also the name of a short sura (surat al-Asr). This raises the middle daily prayer to a preciously higher rank for practicing Muslims in particular when it falls on Fridays.

Ja'fari and Zaydi schools of thought

According to the Ja'fari and Zaydi schools of thought the time period within which the Asr prayer must be recited is the following:

However, it is very important to recite the prayer as soon as the time begins. Letter 52 of Nahj al-Balagha contains instruction of Ali to his governors on the timings of salat, "The Asr prayers can be performed till the sun is still bright and enough time of the day is left for a person to cover a distance of six miles."

The time period within which the Asr prayer must be recited is the following:

The Islamic prophet Muhammad said, "He who observes Al-Bardan (i.e., Fajr and `Asr prayers) will enter Jannah.Sahih Bukhari and Muslim, Narrated by Abu Musa. In another hadith: Muhammad said 'He who misses his Asr Salat (i.e. reads it after its specified time) is as if he had lost his wife, children and all his wealth.’ (Sahih Muslim)