This article is about the military unit in the US State of Georgia. For the home guard of the country of Georgia, see National Guard of Georgia.

As authorized under the Constitution, Congress has the power to regulate National Guard units; hence they are trained and equipped as a part of the United States Army, even when under state command. The same ranks and insignia are used and National Guardsmen are eligible to receive all United States military awards. All Georgia National Guard soldiers are also eligible for a number of state awards for local services rendered in or to the state of Georgia.

Georgia also maintains its own State Defense Force. This force is separate from the National Guard and reports to the Governor of Georgia as Commander-in-Chief. The GSDF services the state exclusively, especially when the National Guard is deployed and unavailable.[2]

The Georgia National Guard has a State Partnership Program relationship with the Military of Georgia. 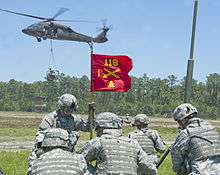 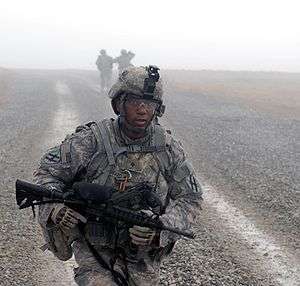 A platoon from 3rd Squadron, 108th Cavalry Regiment, in Kosovo

The adjutant general is the senior military officer and de facto commander of the Georgia National Guard. Also known as TAG, they are subordinated to the governor, the chief executive. As of today, there have been 36 adjutants general in Georgia and the position has changed hands 42 times.[3]