Shah (Šâh or Şah) (/ˈʃɑː/; Persian: شاه‎‎, [ʃɒːh], "king") is a title given to the emperors, kings, princes and lords of Iran (historically also known as Persia). It was also adopted by the kings of Shirvan (a historical Iranian region in Transcaucasia) namely the Shirvanshahs, the rulers and offspring of the Ottoman Empire (termed there as Şeh), Mughal emperors of the Indian Subcontinent, the Bengal Sultanate,[1] as well as in Georgia and Afghanistan. In Iran (Persia and Greater Persia) the title was continuously used; rather than King in the European sense, each Persian ruler regarded himself as the Šâhanšâh (King of Kings) or Emperor of the Persian Empire. The word descends from Old Persian Xšâyathiya "king", which (for reasons of historical phonology) must be a borrowing from Median,[2] and is derived from the same root as Avestan xšaΘra-, "power" and "command", corresponding to Sanskrit (Old Indic) kṣatra- (same meaning), from which kṣatriya-, "warrior", is derived. The full, Old Persian title of the Achaemenid rulers of the First Persian Empire was Xšâyathiya Xšâyathiyânâm or Šâhe Šâhân, "King of Kings"[3] or "Emperor". This word is commonly confused with the unrelated and distinct Indian surname Shah, which is derived from the Sanskrit Sadhu/Sahu (meaning gentleman[4]). 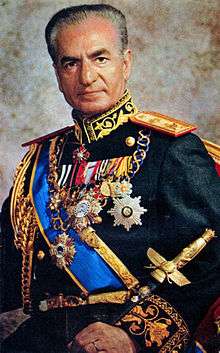 Mohammad Reza Pahlavi, Shah of Iran from 1941 to 1979, was the last ruler to hold the title of shah.

Šâh, or Shāhanshāh (King of Kings) to use the full-length term, was the title of the Persian emperors. It includes rulers of the first Persian Empire, the Achaemenid dynasty, who unified Persia and created a vast intercontinental empire, as well as rulers of succeeding dynasties throughout history until the twentieth century and the Imperial House of Pahlavi.

While the Ottoman Sultans never styled themselves as Shah, but rather Sultan, their male offspring received the title of Şehzade, or prince (literally: offspring of the Shah from Persian "shahzadeh") .

The full title of the Achaemenid rulers was XšāyaΘiya XšāyaΘiyānām, literally "King of Kings" in Old Persian, corresponding to Middle Persian Šāhān Šāh, and Modern Persian شاهنشاه (Shāhanshāh).[5][6] In Greek, this phrase was translated as βασιλεὺς τῶν βασιλέων (basileus tōn basiléōn), "King of Kings", equivalent to "Emperor". Both terms were often shortened to their roots shah and basileus, which later resulted in confusion over the nature of the title due to the adoption of basileus by the Byzantine emperors as an explicitly imperial title equivalent to the various titles of their Roman predecessors; the resultant semantic drift caused basileus tōn basiléōn to now mean "Emperor of Emperors", a fantastical title never used in Persian history, or indeed anywhere else.

In Western languages, Shah is often used as an imprecise rendering of Shāhanshāh. The term was first recorded in English in 1564 as a title for the King of Persia and with the spelling "Shaw". For a long time, Europeans thought of Shah as a particular royal title rather than an imperial one, although the monarchs of Persia regarded themselves as emperors of the Persian Empire (later the Empire of Iran). The European opinion changed in the Napoleonic era, when Persia was an ally of the Western powers eager to make the Ottoman Sultan release his hold on various (mainly Christian) European parts of the Ottoman Empire, and western (Christian) emperors had obtained the Ottoman acknowledgement that their western imperial styles were to be rendered in Turkish as padishah.

In the twentieth century, the Shah of Persia, Mohammad Reza Pahlavi, officially adopted the title شاهنشاه Shâhanshâh and, in western languages, the rendering Emperor. He also styled his wife شهبانو Shahbânu (Empress). Iran no longer had a shah after the 1979 Islamic Revolution.

Shahzadeh (Persian شاهزاده Šāhzādeh or Şehzade). In the realm of a shah (or a more lofty derived ruler style), a prince or princess of the blood was logically called shahzada as the term is derived from shah using the Persian patronymic suffix -zādeh or -zāda, "born from" or "descendant of". However the precise full styles can differ in the court traditions of each shah's kingdom. This title was given to the princes of the Ottoman Empire (Şehzade, Ottoman Turkish: شاهزاده) and was used by the princes of the Mughal Empire in India. It is to be noted, however, that the Mughal royalty were not of Indian origin but of Mongol-Turkic origin and were heavily influenced by Persian culture,[8][9][10] a continuation of traditions and habits ever since Persian language was first introduced into the region by Persianised Turkic and Afghan dynasties centuries earlier.[11][12]

The corruption shahajada, "Shah's son", taken from the Mughal title Shahzada, is the usual princely title borne by the grandsons and male descendants of a Nepalese sovereign, in the male line of the Shah dynasty.

For the heir to a "Persian-style" shah's royal throne, more specific titles were used, containing the key element Vali Ahad, usually in addition to shahzada, where his junior siblings enjoyed this style.[13]