This article is about the 1750s and 1760s' sieges. For other uses, see Battle of Kolberg (disambiguation).

During the Seven Years' War, the Prussian-held town of Kolberg in Brandenburg-Prussian Pomerania (now Kołobrzeg) was besieged by Russian forces three times. The first two sieges, in late 1759 and from 26 August to 18 September 1760,[1] were unsuccessful. A final and successful siege took place from August to December 1761.[2] In the sieges of 1760 and 1761, the Russian forces were supported by Swedish auxiliaries.[3]

As a consequence of the fall of the city, Prussia lost her last major port on the Baltic Coast,[4] while at the same the Russian forces were able to take winter quarters in Pomerania. However, when Empress Elizabeth of Russia died only weeks after the Russian victory, her successor, Peter III of Russia, made peace and returned Kolberg to Prussia.[5]

A first siege in 1759 was repelled by the Prussian defenders.[2] Russian Count Fermor was ordered to expel the Prussian forces commanded by Count Dohna from Pomerania, take Kolberg and establish winter quarters in Brandenburg-Prussian Pomerania. Fermor reluctantly pursued his objectives, regarding full achievement nearly impossible.[6]

Siege was laid on 4 October. Though Russian reinforcements brought up Palmenbach strength to 5,000 the following month, heavy rain and storm rendered successful construction of siegeworks impossible. In addition, twenty-seven Russian warships arrived to assist the siege from the seaside, yet throughout October, storms wrecked twenty-one, and none came close enough to participate. The siege was lifted on 1 November.[7]

The Russian forces had the objective to establish their 1760/61 winter quarters near the lower Oder, which could only be achieved by securing the fortress of Kolberg. In July, a Russian expedition commanded by Gottlob Heinrich Tottleben advanced into Brandenburg-Prussian Pomerania, but upon reaching the Rega valley was ordered to the Silesian battlefields.[8]

Heyde with a map of Kolberg, statue in Berlin

On 27 August, Kolberg was bombarded from the sea by the entire Russian Baltic fleet: twenty-one ships of line, three fregattes and three bomb vessels, all of them had arrived the day before. On 29 August, they were joined by six ships of line and three frigates of their Swedish allies. Some 8,000 troops were deployed and started constructing siege works on 6 September, covered by cavalry units. The Prussian defense was commanded by Colonel Heinrich Sigismund von der Heyde.[8]

Frederick II of Prussia ordered a force of 3,800 commanded by Major-General Hans Paul Werner to disengage from the battles in Silesia and instead relieve Kolberg, which was some 340 kilometres (210 mi) to the North. After a 13-day ride, Werner's force arrived the Russian lines on 18 September and attacked immediately. A successful skirmish made the besiegers believe they were dealing with a force of up to 20,000 and led them to withdraw on board of their vessels. The Swedish and Russian ships left on 20 and 23 September, respectively.[8] Russian casualties amounted to 600 troops.[9]

After the battle, Frederick promoted both Werner and Heyde to the rank of a Lieutenant-General.[8]

Tottleben, who had commanded the Russian spring campaigns in Pomerania the year before,[8] committed treason and revealed to Frederick the Russian plans to siege Kolberg again in 1761. Once Frederick was aware of this, he ordered supplies to the fortress, withdrew prince Friedrich Eugen of Württemberg from the Swedish front in Mecklenburg.[10]

Württemberg reached Kolberg on 4 July, where he commanded a reinforced defense force of 12,000 troops. Russian commander Pyotr Alexandrovich Rumyantsev-Zadunaisky, commanding a weaker force, took quarter in nearby Köslin (now Koszalin) on 23 June, awaiting reinforcements. Württemberg's plan to attack Rumyantsev as long as the odds favoured Prussia was cancelled by Frederick as too risky. After 3,000 Russian troops had reinforced Rumyantsev in mid-August, he laid siege to Kolberg on 22 August.[11]

Twenty-three Russian warships assisted Rumyantsev at this points, an additional eight Swedish warships joined later. The town was continuously bombarded from 25 August to 25 September. On 18 September, Rumyantsev stormed Württembergs defense outside the town, suffering 3,000 casualties with little ground gained. He then changed his strategy from preparing storms to cutting off Kolberg from supplies.[11]

On 30 September, Kolberg was reinforced by several thousand Prussian troops commanded by Dubislav Friedrich von Platen. With the reinforcements, the fortress was defended by nearly 20,000 Prussians. Rumyantsev, who lost naval support on 9 October when the Russian warships sailed home because of bad weather, was reinforced by part of Alexander Borisovich Buturlin's army the same month. His cavalry, commanded by Gustav Berg, cut off Prussian communication lines, countered excursions of Württemberg's 2,700 horse and captured at least four their units.[11]

As the Prussians were running out of supplies, Platen's force was ordered to Berlin in late October. In November, Württemberg abandoned Kolberg, broke through the Russian lines to reunite with Platen, and then attempted to rout Rumyantsev from the rear. When Platen and Württemberg did not succeed, Platen departed as ordered, and Württemberg tried several times to force his way back into the fortress. On 12 December, the Russian forces halted his final attempt at Spie, some kilometers southwest of Kolberg, inflicting 1,000 casualties on his force. Württemberg's remaining 8,000 troops thereupon retreated to Stettin.[12]

On 16 December, Kolberg capitulated to Rumyantsev, enabling his forces to take winter quarter in Brandenburg-Prussian Pomerania.[12] Another Russian achievement was that Rumyantsev's siege kept Platen's forces in check, whom hard-pressed Frederick had expected to aid him in Silesia once Kolberg was relieved. By the time Platen escaped the pocket, the setbacks Frederick suffered in Silesia were already irreversible, thus Platen was ordered to Berlin instead to support his Saxon ally.[13]

Further information: Miracle of the House of Brandenburg 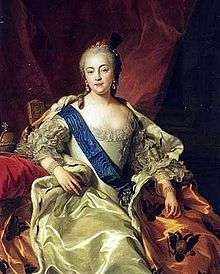 By the time of the sieges, Russian Tsaress Elizabeth of Russia was suffering from an illness which led to her death on 25 December 1761 (OS) or 5 January 1762 (NS). Elizabeth was succeeded by her nephew, Peter III of Russia, an admirer of Frederick partially raised in Berlin.[5]

Peter, who had opposed Russia's anti-Prussian involvement in the Seven Years' War, ceased the hostilities with Prussia at once, and by the terms of the Treaty of Saint Petersburg returned to her all occupied territories (including Kolberg) and provided Frederick with 20,000 troops.[5]

Deprived of their Russian ally, the Austrian House of Habsburg was unwilling to continue the war on their own,[5] and returned to the status quo ante with Prussia in the Treaty of Hubertusburg.[14]