Singin' in the Rain

Singin' in the Rain is a 1952 American musical comedy film directed and choreographed by Gene Kelly and Stanley Donen, starring Kelly, Donald O'Connor and Debbie Reynolds. It offers a lighthearted depiction of Hollywood in the late 1920s, with the three stars portraying performers caught up in the transition from silent films to "talkies."

The film was only a modest hit when first released, with only Donald O'Connor's win at the Golden Globe Awards, Betty Comden and Adolph Green's win for their screenplay at the Writers Guild of America Awards, and Jean Hagen's nomination at the Academy Awards for Best Supporting Actress being the only major recognitions it received. However, it has been accorded legendary status by contemporary critics, and is frequently regarded as the best movie musical ever made,[2] and the best film ever made in the "Arthur Freed Unit" at Metro-Goldwyn-Mayer. It topped the AFI's Greatest Movie Musicals list, and is ranked as the fifth greatest American motion picture of all time in its updated list of the greatest American films in 2007.

In 1989, the United States Library of Congress selected the film for preservation in the National Film Registry.

Don Lockwood (Kelly) is a popular silent film star with humble roots as a singer, dancer and stuntman. Don barely tolerates his vain, cunning, and shallow leading lady, Lina Lamont (Hagen), though their studio, Monumental Pictures, links them romantically to increase their popularity. Lina herself is convinced they are in love, despite Don's protestations otherwise.

At the première of his newest film, The Royal Rascal, Don tells the gathered crowd an exaggerated version of his life story, including his motto: "Dignity, always dignity." His words are humorously contradicted by flashbacks alongside his best friend Cosmo Brown (O'Connor). 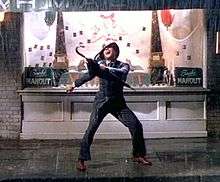 To escape from his fans after the premiere, Don jumps into a passing car driven by Kathy Selden (Reynolds). She drops him off, but not before claiming to be a stage actress and sneering at his "undignified" accomplishments as a movie star. Later, at a party, the head of Don's studio, R.F. Simpson (Millard Mitchell), shows a short demonstration of a talking picture,[lower-alpha 1] but his guests are unimpressed. To Don's amusement, Kathy pops out of a mock cake right in front of him, revealing herself to be a chorus girl. Furious at Don's teasing, she throws a real cake at him, only to hit Lina right in the face. She runs away. Don is smitten with her and searches for her for weeks. Lina tells him while filming a love scene that she had Kathy fired. Don finally finds Kathy working in another Monumental Pictures production. She confesses to having been a fan of his all along.

After a rival studio has an enormous hit with its first talking picture, The Jazz Singer (1927), R.F. decides he has no choice but to convert the next Lockwood and Lamont film, The Duelling Cavalier, into a talkie. The production is beset with difficulties, but by far the worst is Lina's grating voice and strong New York accent. An exasperated diction coach tries to teach her how to speak properly, but to no avail. The Duelling Cavalier's test screening is a disaster; the actors are barely audible thanks to the awkward placing of the microphones, Don repeats the line "I love you" to Lina over and over, to the audience's derisive laughter,[lower-alpha 2] and in the middle of the film, the sound goes out of synchronization, with hilarious results.

Don, Kathy and Cosmo come up with the idea to turn The Duelling Cavalier into a musical called The Dancing Cavalier, complete with a modern musical number called "Broadway Melody". However, they are stumped about what to do about Lina's voice. Cosmo, inspired by a scene in The Duelling Cavalier where Lina's voice was out of sync, suggests they dub Lina's voice with Kathy's. R.F. approves the idea, but has them not tell Lina about the dubbing. When Lina finds out, she is infuriated. She becomes even angrier when she discovers that R.F. intends to give Kathy a screen credit and a big publicity buildup afterward. Lina threatens to sue R.F. unless he orders Kathy to continue working uncredited as Lina's voice. R.F. reluctantly agrees to her demands.

The premiere of The Dancing Cavalier is a tremendous success. When the audience clamors for Lina to sing live, Don, Cosmo, and R.F. tell her to lip sync into the microphone while Kathy, hidden behind the curtain, sings into a second one. While Lina is "singing", Don, Cosmo and R.F. gleefully raise the curtain. Lina flees. A distressed Kathy tries to run away as well, but Don proudly announces to the audience that she's "the real star of the film". Later, Kathy and Don kiss in front of a billboard for their new film, Singin' in the Rain.

Singin' in the Rain was originally conceived by MGM producer Arthur Freed, the head of the "Freed Unit" responsible for turning out MGM's lavish musicals, as a vehicle for his catalog of songs written with Nacio Herb Brown for previous MGM musical films of the 1929–39 period.[8] Screenwriters Betty Comden and Adolph Green contributed lyrics to one new song.[9]

All songs have lyrics by Freed and music by Brown, unless otherwise indicated.[9] Some of the songs, such as "Broadway Rhythm", "Should I?", and most notably "Singin' in the Rain," were featured in numerous films. The films listed below mark the first time each song was presented on screen. 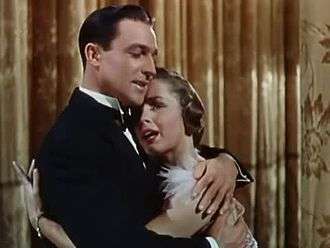 Scenes filmed but cut before release

In the famous dance sequence in which Gene Kelly sings the title song while spinning an umbrella, splashing through puddles and getting soaked to the skin, Kelly was sick with a 103 °F (39 °C) fever.[17] The rain in the scene also caused Kelly's wool suit to shrink during filming. A common myth is that Kelly managed to perform the entire song in one take, thanks to cameras placed at predetermined locations. However, this was not the case as the filming of the sequence took place over 2–3 days.[18] Another myth is that the rain was mixed with milk in order for the drops to better show up on camera; the desired visual effect was produced, albeit with difficulty, through backlighting.[19][20]

Debbie Reynolds was not a dancer at the time she made Singin' in the Rain; her background was as a gymnast.[15] Kelly apparently insulted her for her lack of dance experience, upsetting her. In a subsequent encounter when Fred Astaire was in the studio, he found Reynolds crying under a piano. Hearing what had happened, Astaire volunteered to help her with her dancing. Kelly later admitted that he had not been kind to Reynolds and was surprised that she was still willing to talk to him afterwards. After shooting the "Good Morning" routine, which had taken from 8:00 a.m. until 11:00 p.m. to shoot,[21] Reynolds' feet were bleeding.[15] Years later, she was quoted as saying that "Singin' in the Rain and childbirth were the two hardest things I ever had to do in my life."[22]

Donald O'Connor had to stay in bed for several days after filming the "Make 'Em Laugh" sequence. He smoked up to four packs of cigarettes a day.[18]

Most of the costumes from this film were eventually acquired by Debbie Reynolds and housed in her massive collection of original film costumes, sets and props. Many of these items were sold at a 2011 auction in Hollywood. While most items were sold to private collectors, Donald O'Connor's green check "Fit As a Fiddle" suit and shoes were purchased by Costume World, Inc. and are now on permanent display at the Costume World Broadway Collection Museum in Pompano Beach, Florida.

Donald O'Connor won the Golden Globe Award for Best Actor in a Motion Picture – Musical or Comedy for his portrayal of Cosmo Brown.[26] Betty Comden and Adolph Green received the Writers Guild of America Award for Best Written American Musical.[27]

Singin' in the Rain has appeared twice on Sight & Sound's list of the ten best films of all time, in 1982 and 2002. Its position in 1982 was at number 4 on the critics list; on the 2002 critics' list it was listed as number 10 and it tied for 19 on the directors' list.[28] Review aggregate website Rotten Tomatoes reported that 100% of critics gave the film a positive review based on 48 reviews, with an average score of 9.2/10. The film is currently No. 10 on Rotten Tomatoes' list of best rated films.[29] Rotten Tomatoes summarizes the critical consensus as, "Clever, incisive, and funny, Singin' in the Rain is a masterpiece of the classical Hollywood musical."[30] In 2008, Singin' in the Rain was placed on Empire's 500 Greatest Movies of All Time List, ranking at #8, the highest ranked G-rated movie on the list.

In 1989, Singin' in the Rain was among the first 25 films chosen for the newly established National Film Registry for films that are deemed "culturally, historically or aesthetically significant" by the United States Library of Congress and selected for preservation.

The 40th Anniversary Edition VHS version released in 1992 includes a documentary, the original trailer, and Reynolds' solo rendition of "You Are My Lucky Star," which had been cut from the final film.[41]

According to the audio commentary on the 2002 Special Edition DVD, the original negative was destroyed in a fire, but despite this, the film has been digitally restored for its DVD release. A Blu-ray Ultimate Collector's Edition was released in July 2012.

Singin' in the Rain is a musical with a book by Betty Comden and Adolph Green, lyrics by Arthur Freed, and music by Nacio Herb Brown.

Adapted from the motion picture, the plot closely adheres to the original. Set in Hollywood in the waning days of the silent screen era, it focuses on romantic lead Don Lockwood, his sidekick Cosmo Brown, aspiring actress Kathy Selden, and Lockwood's leading lady Lina Lamont, whose less-than-dulcet vocal tones make her an unlikely candidate for stardom in talking pictures.