Soumagne is a municipality of Belgium. It lies in the country's Walloon Region and Province of Liege. On September 1, 2008, Soumagne had a total population of 15,894.[2] The total area is 27.14 km² which gives a population density of 585 inhabitants per km².

The actual Soumagne is made of several municipalities that were merged in 1977 during the reorganization of the Belgian territory:

From the end of the 19th century until the 1960s, due to a lot of coal mines and a large production factory (called "Cooperative"), Soumagne was a flourishing municipality. After the end of coal mining, the mines were cleaned and residences as well as shopping areas were built on. Some buildings are kept and transformed into touristical activities (such as "le domaine du Bas-Bois").

Since 1980, due to the higher number of people leaving big cities (Liège and Verviers) to more rural municipalities, and due to the highway E40 (European route E40) passing on its territory, Soumagne recovers from the loss of coal mining and the end of the "Cooperative". In that period, houses are built due to a new, and young, population settling down in Soumagne. A lot of new shops and commercial centers are opened and small companies are emerging.

There are a few touristic points in Soumange (among others): 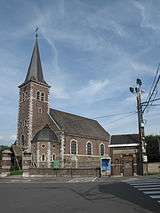