Malmedy (French pronunciation: ​[malmədi]; German obsolete Malmünd) is a Walloon city and municipality of Belgium. It lies in the province of Liège. On January 1, 2006, Malmedy had a total population of 11,829. The total area is 99.96 km² which gives a population density of 118 inhabitants per km². 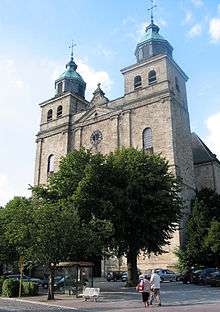 The name of “Malmedy” comes from the Latin sentence “A malo mundarum,” meaning “purifying from evil”. The name originated due to regular flooding in the past from the Warche river, which passes through the town.[3]

The city was created in 648 by Saint Remacle, Provost of Solignac abbey in France. He had established his Benedictine Monastery in Malmedy. Between this date and 1794, the history of Malmedy is linked to the religious Principality of Stavelot-Malmedy, a clerical microstate.

For 1,146 years, Malmedy and Stavelot together formed the Principality of Stavelot-Malmedy. Seventy-seven successive prince abbots of the Germanic Holy Roman Empire and the County of Logne leaded the state. However, a rivalry grew up rapidly between the two towns, because Saint Remacle decided to choose Stavelot as the main city of the Principality.

In the 16th Century a lot of industries appeared in the area of Malmedy: cloth, leather and gunpowder production. In the 17th Century, Stavelot-Malmedy became the most important tannery centre in Europe. But the main industry in Malmedy was the papermaking industry. It brought considerable wealth to the town.

In 1795, during the French Revolution and the Liège Revolution, the Principality of Stavelot-Malmedy disappeared and was united with France. Malmedy was a lower prefecture in the "département de l'Ourthe".[3]

After the defeat of Napoléon in 1815, during the Congress of Vienna, the decision was made to link Malmedy, a Roman and Walloon town, to Prussia, a Germanic state. This special situation of Malmedy caused a lot of problems in the first 50 years. However, the inhabitants were free to speak French as they pleased, including in the day-to-day running of the town council.

This situation changed when Chancellor Bismarck took power following the Franco-German War of 1870. For the Prussian Administration, Malmedy suffered a double disadvantage as it was both francophone and the majority of the inhabitants were Catholic. From this moment, Malmedy was forced to be Germanised. In schools, lessons in French were banned and the German language was mandatory. The priests were not allowed to preach any longer in French.[4]

During the First World War, the population of Malmedy fought in German uniforms. But when the defeat of Prussia was proclaimed, Malmedy and the other eastern cantons were annexed to Belgium by virtue of the Treaty of Versailles. Malmedy and neighbouring Eupen were subject to a plebiscite to determine whether the region would be separated from Germany and annexed to Belgium. The plebiscite ballots required registration of the names and addresses of the pro-German voters (the others were assumed to be pro-Belgian), and the German-speaking population of Eupen and Malmedy were intimidated. Both were formally annexed on 6 March 1925. The main church of Malmedy was built in 1777 and served as a cathedral from 1920 to 1925.[5] Some old sources spell the city's name "Malmédy" as this accent was intentionally added when being part of Prussia and Germany, but its official website lists it as "Malmedy", with no accent. Along with the neighbouring city of Eupen, it formed a German-speaking area of Belgium. This was reversed after the war. During this period, a few undaunted individuals went as far as founding a “Walloon Club” in 1897, and this still exists today.[6]

In 1944, during the Battle of the Bulge, the area was the site of the Malmedy massacre, where 84 American prisoners of war were executed by Nazi SS troops under the command of Joachim Peiper. This was one of a number of such massacres of prisoners and Belgian civilians which took place in the Malmedy area. Between 1940 and 1945, Malmedy was re-incorporated into Germany.

On 21 December the town itself, which was then held by US troops, was attacked by German forces under the command of Otto Skorzeny, who were repelled. Moreover, on 23, 24 and 25 December 1944 the city was bombed repeatedly by the United States Army Air Forces in a series of friendly fire incidents. Approximately 200 civilians were killed in the tragic attacks, while the number of American casualties has never been revealed by the United States Department of Defense.

Today, the people of Malmedy are a mix of Roman and German cultures. Despite all the changes, the Malmedians seem to have preserved the qualities recognised by an 18th-century English chemist when he stated, “The inhabitants of Malmedy are honest, skillful, opulent, gracious, sociable and courteous towards foreigners.” 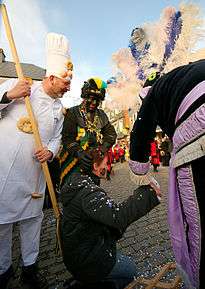 Inhabitants are proud of their Walloon language and their typical folklore. The people of Malmedy never miss the chance to celebrate a festival. The main celebrations in Malmedy are the “Cwarmê” (Carnival), the “Saint-Jean d’été” (Midsummer's Day), the “Saint-Pierre” (the annual funfair at Saint Peter's Day), the "Saint-Géréon" (in Walloon “Tribodlèdje”) and the Saint Martin's day (“Evêuyes”).

The "Cwarmê", a Walloon word defining the Carnival of Malmedy, is the town's main festivity. Even though a part of the Malmedian culture is linked to the German culture, the "Cwarmê" of Malmedy is actually a Walloon and Latin carnival.

The celebration takes place from Shrove Friday to Shrove Tuesday, 40 days before Easter. The "Cwarmê" Sunday is the most important day. For the tourist, it's the opportunity to see the old traditional costumes in the streets (2,500 people in costume). The "Cwarmê" is depicted as a "street carnival" and is not only a parade: people who are disguised pass through the crowd and perform amongst them.

Some traditional costumes at the "Cwarmê" of Malmedy[52]: