It borders (clockwise from the north) Limburg in the Netherlands, North Rhine-Westphalia and Rhineland-Palatinate in Germany, Diekirch in Luxembourg, and in Belgium the provinces of Luxembourg, Namur, Walloon Brabant (Wallonia), as well as those of Flemish Brabant and Limburg (Flanders).

It is an area of French and German ethnicity.

The capital of the province is the city of the same name, Liège.

The modern borders of the province of Liège date from 1795, which saw the unification of the Principality of the Prince-Bishopric of Liège with the revolutionary French Department of the Ourthe (sometimes spelled Ourte). (Parts of the old Principality of Liege also went into new French départements Meuse-Inférieure, and Sambre-et-Meuse.)

The province of Ourthe, as it was known then, was under French control during the reign of Napoleon Bonaparte. Napoleon visited the city during one of his campaigns and ordered the destruction of its vineyards in order to prevent the Liege wine industry from competing with its French counterpart.

Following Napoleon’s fall from power in 1815, Liege became part of the Kingdom of the Netherlands. Liege University scholars helped to write the new Dutch constitution after the Napoleonic Wars. Despite these contributions there was a widespread perception among the people of Liege that they were discriminated against by the Dutch government due to religious and language differences.

In September 1830, rumors spread that Walloons in Brussels were expelling the Dutch. Liege intellectuals responded to these events by contacting Waloon scholars living in Paris to discuss Belgian independence. A militia was formed to press these demands led by Charlier "Wooden Leg" leading (eventually) to the formation of an independent Kingdom of Belgium.

In the 19th Century, the province was an early center of the Industrial Revolution. Its rich coal deposits and steel factories helped Belgium to form the basis of the region's increasing economic power.

During the 20th century, due to Liège's borders with Germany, it saw fierce fighting in both World Wars. In World War I, Liege’s strong line of reinforced concrete military forts temporarily halted the German advance through Belgium, giving time to construct trenches in Flanders which subsequently saw some of the worst fighting of that war. In world War II, Liège was the site of major fighting during the Battle of the Bulge. There, the Germans orchestrated their final offensive move against the combined Allied armies. Malmedy and Saint-Vith in particular saw intense battles against the Nazis.

Liège’s heavy industry thrived in the 1950's and 1960'sbut this has been in steady decline since that time. Liege is the last city of Wallonia that still maintains a functioning steel industry.

Liège continues to be the economic and cultural capital of Wallonia, with its university, medieval heritage and heavy industry.

The province has an area of 3,844 square kilometres (1,484 sq mi), which is divided into four administrative districts (arrondissements in French) containing a total of 84 municipalities.

The Province of Liège is divided into four administrative arrondissements: 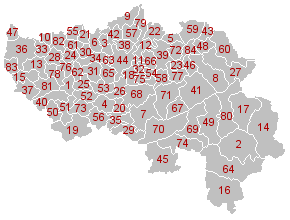 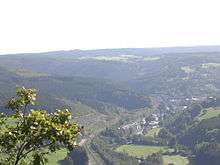 The Coo Waterfalls (municipality of Stavelot)

Municipalities that have city status have a (city) behind their name.