Neupré is a municipality of Belgium. It lies in the country's Walloon Region and Province of Liege. On January 1, 2006, Neupré had a total population of 9,798. The total area is 31.69 km² which gives a population density of 309 inhabitants per km².

On the southeast edge of Neupré lies the Ardennes American Cemetery and Memorial, the resting place of over 5,000 American soldiers who died in Northern Europe during World War II. 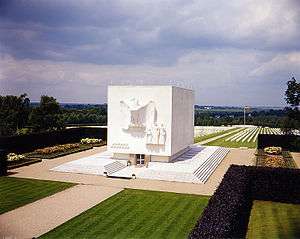