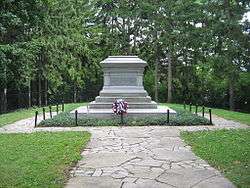 President Hayes and his wife Lucy Webb Hayes are buried at a memorial on the property. Hayes died in 1893 and was buried in Oakwood Cemetery next to his wife who had died in 1889. Following the gift of this home to the state of Ohio for the Spiegel Grove State Park, their bodies were reinterred at Spiegel Grove in 1915.

"Old Whitey", a war horse that served during the Civil War and belonged to then-Major (later Major General) Hayes became the mascot of the 23rd Ohio Volunteer Infantry. The horse was buried at Spiegel Grove upon his death in 1879, with a grave marker reading Old Whitey A Hero of Nineteen Battles 1861-1865.[4]

On October 15, 1966, it was added to the National Register of Historic Places. 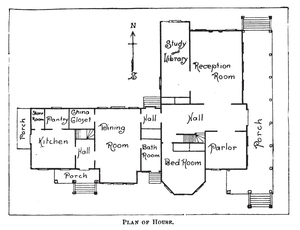 The house was built around 1860 as a two-story brick mansion. It featured many bedrooms and a wrap-around porch. In 1880, the house was expanded with the addition of 5 new rooms, and the massive staircase that led all the way up to the 4th floor. In 1889, 6 more rooms were added to the house, giving it its current appearance. After all the expansions, the house had over 30 rooms and 10,000 square feet (930 m2) of living space.

Since then, the house has been open for tourists. For a fee, visitors can view the various rooms as well as furniture, books, and other items in the house. Visitors are allowed to access most of the rooms on the first and second floors. The third and fourth floors are currently not open to the public.