Splitting of the moon

This article is about an Islamic theological issue. For theories of formation of the moon which involve fragments, see Origin of the Moon § Accretion. 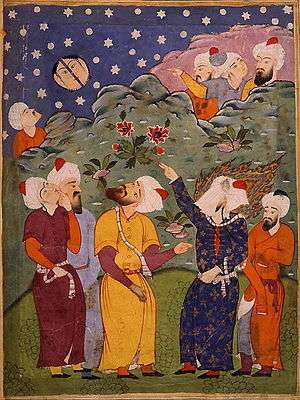 Muhammad points out the splitting moon. Anonymous 16th-century watercolor from a Falnama, a Persian book of prophecy. Muhammad is the veiled figure on the right.

The splitting of the moon (Arabic: انشقاق القمر‎‎) was a miracle attributed to the Islamic prophet Muhammad,[1] derived from the Quranic verses 54:1-2, and mentioned by Muslim traditions such as the Asbab al-nuzul (context of revelation). Most Muslim commentators interpret the event as a literal split in the moon, while some others identify it as an event that will happen at judgement day or an optical illusion.

Early traditions supporting a literal interpretation are transmitted on the authority of companions of Muhammad such as Ibn Abbas, Anas bin Malik, Abdullah bin Masud and others.[2][3] According to the Indian Muslim scholar Abdullah Yusuf Ali, the moon will split again when the day of judgment approaches. He says that the verses may also have an allegorical meaning, i.e. the matter has become clear as the moon.[4] The Qur'anic verses 54:1-2 was part of the debate between medieval Muslim theologians and Muslim philosophers over the issue of the inviolability of heavenly bodies. In 2010 a NASA Lunar Science Institute (NLSI) staff scientist, named Brad Bailey, said "No current scientific evidence reports that the Moon was split into two (or more) parts and then reassembled at any point in the past."[5]

The narrative was used by some later Muslims to convince others of the prophethood of Muhammad.[6] It has also inspired many Muslim poets, especially in India.[7]

The Qur'an and Islamic tradition

Early traditions and stories explain this verse as a miracle performed by Muhammad, following requests of some members of the Quraysh.[8][9] Most Muslim commentators accept the authenticity of those traditions. The following verse 54:2, "But if they see a Sign, they turn away, and say, 'This is (but) transient magic'" is taken in the support of this view.[9] The classical commentator Ibn Kathir provides a list of the early traditions mentioning the incident: A tradition transmitted on the authority of Anas bin Malik states that Muhammad split the moon after the pagan Meccans asked for a miracle. Another tradition from Malik transmitted through other chains of narrations, mentions that the mount Nur was visible between the two parts of the moon (Mount Nur is located in Hijaz. Muslims believe that Muhammad received his first revelations from God in a cave on this mountain, Cave Hira'). A tradition narrated on the authority of Jubayr ibn Mut'im with a single chain of transmission says that the two parts of the moon stood on two mountains. This tradition further states that the Meccan responded by saying "Muhammad has taken us by his magic... If he was able to take us by magic, he will not be able to do so with all people." Traditions transmitted on the authority of Ibn Abbas briefly mention the incident and do not provide much details.[2] Traditions transmitted on the authority of Abdullah bin Masud describe the incident as follows:[2][10]

The narrative was used by some later Muslims to convince others of the prophethood of Muhammad. Annemarie Schimmel for example quotes the following from Muslim scholar Qadi Iyad who worked in the 12th century:[6]

It has not been said of any people on the earth that the moon was observed that night such that it could be stated that it was not split. Even if this had been reported from many different places, so that one would have to exclude the possibility that all agreed upon a lie, yet, we would not accept this as proof to the contrary, for the moon is not seen in the same way by different people... An eclipse is visible in one country but not in the other one; in one place it is total, in the other one only partial.

Al-Zamakhshari, a famous commentator of the Qur'an, acknowledged the splitting of the moon as one of Muhammad's miracles. But he also suggested that the splitting might take place only on the day of judgment.[4] The Muslim scholar Yusuf Ali provides three different interpretations of the verse. He holds that perhaps all three are applicable to the verse: Moon once appeared cleft asunder at the time of Muhammad in order to convince the unbelievers. It will split again when the day of judgment approaches (here the prophetic past tense is taken to indicate the future). Yusuf Ali connects this incident with the disruption of the solar system mentioned in 75:8-9. Lastly, he says that the verses can be metaphorical, meaning that the matter has become clear as the moon.[11]

Some dissenting commentators who do not accept the miracle narration believe that the verse only refers to the splitting of the moon at the day of judgment.[9][12] Likewise, M. A. S. Abdel Haleem writes:

The Arabic uses the past tense, as if that Day were already here, to help the reader/listener imagine how it will be. Some traditional commentators hold the view that this describes an actual event at the time of the Prophet, but it clearly refers to the end of the world.[13]

Some Muslim scholars postulate and believe that a (now known) Astronomical event must have happened at that time, which made it appear to the observers as if the moon had been split in two, because the phenomenon was seen at least in India as well.[14] One of the possible lunar events could be a large asteroid hitting the moon, and the plume and debris from the strike blocking enough lunar view to make it appear as if the Moon had split in two. A second possibility could be a celestial body passing between Earth and the Moon and blocking some part of lunar surface for short time. Moreover, in the light of the verse that was revealed at that time, the word "Saa'at" also means spiritual revolution, so the event also symbolized the end of the Pagan Arab culture and religions which used Moon as their symbol or worshipped moon gods.

Western historians such as A.J. Wensinck and Denis Gril, reject the historicity of the miracle arguing that the Qur'an itself denies miracles, in their traditional sense, in connection with Muhammad.[7][15]

Debate over the inviolability of heavenly bodies

Quran 54:1-2 was part of the debate between medieval Muslim theologians and Muslims philosophers over the issue of the inviolability of heavenly bodies. The philosophers held that nature was composed of four fundamental elements: earth, air, fire, and water. These philosophers however held that the composition of heavenly bodies were different. This belief was based on the observation that the motion of heavenly bodies, unlike that of terrestrial bodies, was circular and without any beginnings or ends. This appearance of eternity in the heavenly bodies, led the philosophers to conclude that the heavens were inviolable. Theologians on the other hand proposed their own conception of the terrestrial matter: the nature was composed of uniform atoms that were re-created at every instant by God (the latter idea was added to defend God's omnipotence against the encroachment of the independent secondary causes). According to this conception, the heavenly bodies were essentially the same as the terrestrial bodies, and thus could be pierced.[4]

In order to deal with implication of the traditional understanding of the Quranic verse 54:1-2, some philosophers argued that the verse should be interpreted metaphorically (e.g. the verse could have referred to a partial lunar eclipse in which then earth obscured part of the moon).[4]

This tradition has inspired many Muslim poets, especially in India.[7] In poetical language Muhammad is sometimes equated with the sun or the morning light. As such, part of a poem from Sana'i, a renowned early twelfth century Persian Sufi poet, reads: "the sun should split the moon in two".[6] Jalal ad-Din Rumi, a renowned Persian-writing poet and mystic, in one of his poems conveys the idea that to be split by the Muhammad's finger is the greatest bliss the lowly moon can hope for and a devoted believer splits the moon with Muhammad's finger.[6] Elaborating on this idea, Abd ar-Rahman Jami, one of the classical poets and mystics of Persia, plays with the shapes and numerical values of Arabic letters in a complicated way: The full moon, Jami says, resembles the Arabic letter for a circular m with the numerical value 40. When Muhammad split the moon, it became like two crescent-shaped n's (the Arabic letter for "n") whose numerical value is 50 each. This would mean that, thanks for the miracle, the value of moon had increased.[6]

In another place Rumi, according to Schimmel, alludes to two miracles attributed to Muhammad in tradition, i.e. the splitting of the moon (which shows the futility of man's scientific approach to nature), and the other that Muhammad was illiterate.[6] 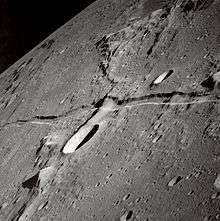 NASA photograph from Apollo 10 in 1969. Rima Ariadaeus, one of many rilles on the surface of the moon, has been claimed on Internet forums to be evidence of the splitting of the moon.[16]

Apollo mission photographs of the Rima Ariadaeus revealed a 300 km-long rift line on the surface of the moon.[17] On being asked in 2010 about Internet suggestions that this was proof of the Quranic story, NASA scientist Brad Bailey said, "My recommendation is to not believe everything you read on the internet. Peer-reviewed papers are the only scientifically valid sources of information out there. No current scientific evidence reports that the Moon was split into two (or more) parts and then reassembled at any point in the past."[5]