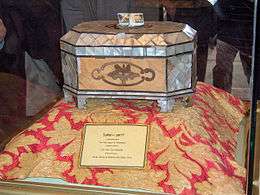 Some streams of Islam have a tradition of venerating the relics attributed to the Islamic prophet Muhammad; others warn that this practice can lead to the sin of shirk (idolatry). The most genuine relics are believed to be those housed in Istanbul's Topkapı Palace,[1][2][3] in a section known as Hirkai Serif Odasi (Chamber of the Holy Mantle).

The 17th-century French explorer Jean-Baptiste Tavernier wrote about his discussions with two treasurers of Constantinople, who described the standard, mantle and the seal.[4] Two centuries later, Charles White wrote about the mantle, the standard, the beard, tooth, and footprint of Muhammad, the last of which he saw personally.[5]

The battle standard of Muhammad, known in Turkish as Sancak-ı Şerif, was believed to have served as the curtain over the entrance of his wife Aisha's tent. According to another tradition, the standard had been part of the turban of Buraydah ibn al-Khasib, an enemy who was ordered to attack Muhammad, but instead bowed to him, unwound his turban and affixed it to his spear, dedicating it and himself to Muhammad's service.[6]

Selim I acquired it, and had it taken to the Grand Mosque of Damascus where it was to be carried during the annual Hajj pilgrimage to Mecca. Realising its political possibilities, Murad III had it sent to Hungary as an incentive for his army.

In 1595, Mehmed III had it brought to Topkapı Palace, where it was sewn into another standard, alleged to be Umar's[6] and together they were encased in a rosewood box, inlaid with gems including tortoiseshell and mother of pearl. The keys to the box were traditionally held by the Kislar Agha.[6]

It became associated with the Ottoman Empire, and was exhibited whenever the Sultan or Grand Vizier appeared before the field army, at the 1826 Auspicious Incident and at the outset of Turkey's entrance into World War I.[6]

Tavernier reported that the Lance was kept outside the Sultan's bedroom in the 17th century,[4] by 1845 White said he saw it resting against a wall near the standard[5] and by 1920 its whereabouts were unknown.[6] 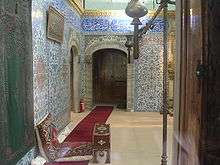 Inside the Chamber of the Blessed Mantle

The Holy Mantle, Hırka-i Şerif, or Burda is an item of clothing that was given as a gift by Muhammad to Ka'b ibn Zuhayr, whose children sold it to Muawiyah I, the founder of the Umayyad dynasty. After the fall of the Umayyads, the Mantle went to Baghdad under the Abbasids, to Cairo under the Mamluks, and finally moved by Selim I to Topkapi Palace in 1595.[6]

The famous Poem of the Mantle was composed by the eminent Imam al-Busiri in praise of Muhammad and his miraculous mantle.

Tavernier described it as a white coat made of goat's hair with large sleeves,[4] or a cream fabric with black wool lines.

The Grand Seignor having taken it out of the Coffer, kisses it with much respect, and puts it into the hands of the Capi-Aga, who is come into the Room by his Order, after they had taken the Impressions of the Seal. The Officer sends to the Overseer of the Treasury, for a large golden Cauldron, which is brought in thither by some of the Senior-Pages. It is so capacious, according to the description which they gave me of it, as to contain the sixth part of a Tun, and the out-side of it is gamish'd, in some places, with Emeralds, and Turquezes. This Vessel is fill'd with water within six fingers breadth of the brink, and the Capi-Aga, having put Mahomet's Garment into it, and left it to soak a little while, takes it out again, and wrings it hard, to get out the water it has imbib'd, which falls into the Cauldron, taking great care that there falls not any of it to the ground. That done, with the said water he fills a great number of Venice-Chrystl Bottles, containing about half a pint, and when he has stopp'd them, he Seals them with the Grand Seignor's Seal. They afterwards set the Garment a drying, till the twentieth day of the Ratnazan, and then his Highness comes to see them put [it] up again in the Coffer.[4]

The Sacred seal, or Mühr-ü Şerif in Turkish, was reported by Tavernier, who said it was kept in a small ebony box in a niche cut in the wall by the foot of a divan in the relic room at Topkapi.[4]

The seal itself is encased in crystal, approximately 3"x4", with a border of ivory.[4] It has been used as recently as the 17th century to stamp documents.[4]

Known in Turkish as the Sakal-ı Şerif, the beard was said to have been shaved from Muhammad's face by his favoured barber Salman in the presence of Abu Bakr, Ali and several others. Individual hairs were later taken away, but the beard itself is kept in a glass reliquarium.[6]

Muhammad lost four teeth at the Battle of Uhud, after being struck with a battle axe. Two of the teeth were supposedly lost, one was preserved at Topkapi, and another was held by Mehmed II.[6]

The Blessed Sandals, Nalain Shareef in Urdu, .[8] They have traditionally been used to gain the blessings of Muhammad.[9]

A 1400-year-old bowl used by Muhammad which after his death was kept by his daughter Fatimah and her husband Ali, the fourth Caliph and Muhammad's cousin. After their death, the bowl was kept by their children Hasan and Hussein. The bowl was passed from generation to generation by descendants of Muhammad until it finally reached Britain. On 21 September 2011 the bowl was delivered to Chechnya and now is kept in "Heart of Chechnya" Mosque named after Ahmad Haji Kadyrov in Grozny.[10]

Regarding the bowl, Ibn Kathir, the Islamic scholar and commentator on the Qur'an, writes in his book Wives of the Prophet Muhammad:[11]

It had been related by Abu Hurairah that on one occasion, when Khadijah was still alive, Jibril came to the Prophet (peace and blessings of Allah be upon him) and said, "O Messenger of Allah, Khadijah is just coming with a bowl of soup (or food or drink) for you. When she comes to you, give her greetings of peace from her Lord and from me, and give her the good news of a palace of jewels in the Garden, where there will be neither any noise nor any tiredness."

A number of hadith refer to blessings resulting from physical contact with Muhammad's person, or bodily fluids. Generally in Islam, Muhammad is the only person who people can seek blessings from, whether through his body, what touches his body or bodily fluids.[12] And here are some hadiths that mention only some his blessings:

AbdurRahman ibn AbuLayla, quoting Usayd ibn Hudayr, a man of the Ansar, said that while he was given to jesting and was talking to the people and making them laugh, the Prophet poked him under the ribs with a stick. He said: Let me take retaliation. He said: Take retaliation. He said: You are wearing a shirt but I am not. The Prophet then raised his shirt and the man embraced him and began to kiss his side. Then he said: This is what I wanted, Messenger of Allah!
— Sunan Abi Dawud.[13]

The Prophet asked for a tumbler containing water and washed both his hands and face in it and then threw a mouthful of water in the tumbler and said to both of us (Abu Musa and Bilal), "Drink from the tumbler and pour some of its water on your faces and chests."
— Sahih al-Bukhari.[14]

Narrated Al-Miswar bin Makhrama and Marwan (an excerpt from a long hadith):

...`Urwa then started looking at the Companions of the Prophet. By Allah, whenever Allah's Messenger spat, the spittle would fall in the hand of one of them (i.e. the Prophet's companions) who would rub it on his face and skin; if he ordered them they would carry his orders immediately; if he performed ablution, they would struggle to take the remaining water;...
— Sahih al-Bukhari.[15]

Once Allah's Messenger went to Al-Batha' at noon, performed the ablution and offered' a two rak`at Zuhr prayer and a two-rak`at `Asr prayer while a spearheaded stick was planted before him and the passersby were passing in front of it. (After the prayer), the people got up and held the hands of the Prophet and passed them on their faces. I also took his hand and kept it on my face and noticed that it was colder than ice, and its smell was nicer than musk.
— Sahih al-Bukhari.[16]

When Allah's Messenger had thrown pebbles at the Jamra and had sacrificed the animal, he turned (the right side) of his head towards the barber, and i. e shaved it. He then called Abu Talha al-Ansari and gave it to him. He then turned his left side and asked him (the barber) to shave. And he (the barber) shaved. and gave it to Abu Talha and told him to distribute it amongst the people.
— Sahih Muslim.[17]

That she conceived `Abdullah bin Az-Zubair. She added, "I migrated to Medina while I was at full term of pregnancy and alighted at Quba where I gave birth to him. Then I brought him to the Prophet and put him in his lap. The Prophet asked for a date, chewed it, then he spat in his mouth. So, the first thing that entered the child's stomach was the saliva of Allah's Messenger. Then the Prophet rubbed the child's palate with a date and invoked for Allah's Blessings on him, and he was the first child born amongst the Emigrants in the Islamic Land (i.e. Medina).
— Sahih al-Bukhari.[18]

That Allah's Apostle came to the house of Umm Sulaim and slept in her bed while she was away from her house. On the other day too he slept in her bed. She came and it was said to her:

It is Allah's Apostle who is having siesta in your house, lying in your bed. She came and found him sweating and his sweat falling on the leather cloth spread on her bed. She opened her scent-bag and began to fill the bottles with it. Allah's Apostle was startled and woke up and said: Umm Sulaim, what are you doing? She said: Allah's Messenger, we seek blessings for our children through it. Thereupon he said: You have done something right.