Nanded is a city in Maharashtra state of India, the 8th largest Urban agglomeration of Maharashtra, and the 81st most populous city in India. It is also headquarters of Nanded district and second largest city in Marathwada region after Aurangabad. Nanded has been a major place for Sikh pilgrimage.[2] 10th Sikh Guru, Guru Gobind Singh made Nanded as his permanent abode and passed Guruship to Guru Granth Sahib before his death in 1708 in Nanded.[3] Nanded is located on the banks of Godavari river. Nanded was famous for its Vedic rituals on the sacred banks of river Godavari. Urvashi Ghat, Ram Ghat, Govardhan Ghat are some of them . Nanded has been the regional education hub which has Swami Ramanand Teerth Marathwada University at Vishnupuri. Nanded is also known for its health services.

The city was formerly known as Nanditaṭa (Marathi: नंदितट) according to a copper plate inscription found at Vasim. It was also known as Nandigrāma.[4] The name Nanded is widely believed to have originated from Nandi the Vahana of Lord Shiva, who performed penance on the banks (Taṭa of River Godavari. This Nandi taṭa became Nanded.

One of the oldest and historic cities in the Marathwada region of Maharashtra, Nanded is situated on the north bank of the Godavari River, in the southeastern part of Maharashtra, bordering Telangana.[5]

The Nanda dynasty ruled over Nanded for generations in the 5th and 4th centuries BCE.

Later on, Nanded District and the adjoining areas were ruled over by the Andhrabhrtyas and Satvahanas during the first century AD.[5]

Early mentions of Nanded and irrigation practices are found in the Leela Charitra, a treatise written about 700 years ago by Mhaimbhatta.[6]

In 1708, the year following Aurangzeb's death, Guru Gobind Singh, the tenth spiritual leader of the Sikhs, came to Nanded. He proclaimed himself the last living Guru and established the Guru Granth Sahib as the eternal Guru of Sikhism, elevating the reverence of the text to that of a living leader.

Around 1835, Maharaja Ranjit Singh oversaw the construction of a gurdwara at Nanded. Located at the site of Guru Gobind Singh's cremation, the gurdwara is part of the Hazur Sahib. Today, Nanded gains prominence from the Sikh Gurdwara which is erected at the place where Guru Gobind Singh, the last Sikh Guru, died in 1708.

Nanded became part of the Hyderabad State in 1725 and continued to be part of the Nizam's dominions until 1948.[5]

After India gained independence in 1947, the Indian Armed Forces annexed Hyderabad and ended the rule of the Nizam in Operation Polo,[7] making Nanded part of the new Hyderabad State. Nanded remained in annexed Hyderabad state until 1956 when it was included in Bombay Presidency. On May 1, 1960 Maharashtra state was created on linguistic basis and Marathi dominant Nanded district became part of Maharashtra.[8][9]

Roots of Sikhism in Nanded

Nanded is associated with the first as well as the last Sikh Gurus. While Shri Guru Nanak Dev travelled through Nanded City towards south and Sri Lanka, Shri Guru Gobind Singh Ji spent his last few days of earthly life here. He arrived here with emperor Bahadur Shah-I towards the end of August in 1707 AD. The Mughal emperor went to Golconda, and Guru Gobind Singh Ji decided to stay in Nanded. 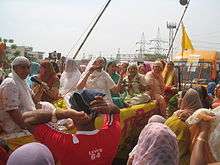 It appears that Shri Guru Gobind Singh Ji had followed the emperor through Rajasthan and Central Province to Deccan (South) in the hope that justice would be meted out and punishment would be given to his persecutors, murderers of his young sons and to those who executed numerous innocent Sikhs. But finding that the emperor was not interested in punishing the culprits, the Guru was disappointed and decided to part with the emperor. He died without lineal descendant after the martyrdom of his four sons during his lifetime.[10][11]

In the first week of October 1708, having understood that the time had come to leave the mortal attire and to depart, the Guru is reported to have taken five coins and a coconut and placed them before the Sikh holy scriptures Granth Sahib thereby installing the Granth Sahib as Guru. The five coins are symbolically known as Sangat or the congregation. Shri Guru Gobind Singh Ji and formally passed on the spiritual light of Guruship to Guru Granth Sahib. The Shabad-Guru of the Sikhs was thus immortalised.

Nanded is the second largest city in Marathawada after Aurangabad with an area of 63.22 km2.[12] Also it is 8th largest city/urban agglomeration in Maharshatra after Mumbai, Pune, Nagpur, Nasik, Aurangabad, Solapur and Amravati. Nanded district borders Latur district and Parbhani district to the west and Yavatmal district to the north, the district is bounded by Nizamabad, Medak and Adilabad districts of Telangana on the east. Nanded City is divided in two parts: Old Nanded (20.62 km2) on the north bank of Godavari River, and New Nanded (31.14 km2), comprising Waghala and six other newly merged villages which are situated on south of the Godavari river.22. The entire area is covered by the Deccan Traps lava flows of Upper Cretaceous to Lower Eocene age. The lava flows are overlain by thin alluvial deposits along the Kham and Sukhana river. The basaltic lava flows belonging to the Deccan Trap is the only major geological formation occurring in Aurangabad. The lava flows are horizontal and each flow has two distinct units. The highly weathered vesicular trap and underlying weathered jointed and fractured massive trap constitutes the main water-yielding zones. The soil is mostly formed from igneous rocks and are black, medium black, shallow and calcareous types having different depths and profiles

Nanded's airport, the Shri Guru Gobind Singh Ji Airport is typically served by regularly scheduled seasonal flights to Mumbai and Delhi during the winter months. The airport has a 'Night Landing Facility'. Currently the airport is non-operational since there aren't any flights on the daily basis.[16]

The city had three textile manufacturing unit but now closed. Nanded is gradually becoming industrial city as few new industries starting their operations. Tourism is another source of revenue with about ten million visitors or devotee visits the city per year. Nanded and Aurangabad are two regional big cities located at two extreme sides of Marathwada, there has been constant demand for creation of new industrial zone named Nanded Aurangabad Industrial Corridor which will connect to Delhi Mumbai Industrial Corridor. Out of 196 Special Economic Zones of Maharashtra only 10 are in Marathwada.

The Swami Ramanand Teerth Marathwada University was established at Nanded by bi-furcating the Marathwada University, Aurangabad on 17 September 1994, the day on which in 1948 Hyderabad State was liberated from rule of the Nizam. Nanded is a district headquarters as well as a holy city situated on the banks of Godavari River in southeastern part of Maharashtra state.

Agriculture is the main occupation of the people in rural parts of the region. Cotton, Banana, Sugarcane, Mango, soybean, Sweetlime and Jawar (sorghum) are the essential crops grown in the city's nearby area. Nanded is second largest banana-producing district in the state after Jalgoan. Nanded have Regional Cotton Research Center. To support the cotton-growing industry, textile mills need to start. An agricultural school is operational under the aegis of Krishi Vidyapeeth, Parbhani. 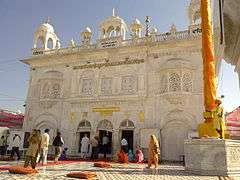 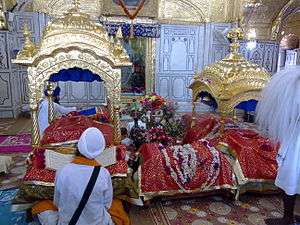 Interior view of the gurdwara.

Nanded is one of the ancient and historical places in the Marathwada region of Maharashtra State.[17][18]

Temple buildings in Trikut Village is the Nabhishthan (centre point) of the River Godavari, is believed to be very sacred for Hindus.

The Siddheshwar temple at Hottal built during the Chalukya era is a marvelous piece of Hemadpanti temple structure.[19]

Tadkhel Village, Degloor Taluka has Lord Shiva Temple, Fully made up of big stones, with old scriptures on a big stone, constructed by Senapati of one of the Hindu King hundreds of years ago. Tadkhel Village also has Jagdamba Mata Mandir which is 2nd major temple after Chandrapur Temple.

Nanded has historic and spiritual significance for the Sikhs. Sikh Gurdwaras. In 1708, Guru Gobind Singh the tenth spiritual leader of the Sikhs came over to Nanded, his permanent abode. It was he who preached amongst the Sikhs that there need not be any spiritual leader for them and they should take Granth Sahib as their leader. In 2008, the tercentenary of this occasion, Guru-ta-Gaddi celebrations were held in Nanded. A Gurdwara has also been constructed where Guru Gobind Singh died. It is known as Hazur Sahib Nanded

Gurdwara of Hazur Sahib Nanded: built by Maharaja Ranjit Singh, the ruler of Punjab from 1830 to 1839 A.D. it is one of the five High seats of Authority of the Sikhs. Guru Gobind Singh died here and his remains are preserved along with various weapons.[20]

Nanded Fort: Situated 4 km away from the Nanded Railway Station, the Nanded Fort has a beautiful location. Sensuous Godavari River encloses the fort on three sides. There is a good garden and water works enhancing its natural beauty. It is under renovation work

Mahur is home to goddess Renuka, and forms one part of the Saade Teen Shaktipeeth (three and a half seats of Deity of Power). It also has a Parshuram Mandir.

Located on two adjoining hills, the Mahur fort was an important point on the major route from the North to the Deccan. [21]

Sahasrakund Waterfalls is a favourite destination for tourists during the monsoon. Situated in Islapur village in Kinwat taluka, it is also accessible by train.

Unkeshwar village in Kinwat taluka also has a famous Shiva temple. Hot water springs with contents of sulphur and phosphate are believed to have medicinal properties.