The Bengal Subah was a subdivision of the Mughal Empire encompassing modern Bangladesh and the Indian states of West Bengal, Bihar and Orissa between the 16th and 18th centuries. The state was established following the dissolution of the Bengal Sultanate, when the region was absorbed into one of the largest empires in the world. The Mughals played an important role in developing modern Bengali culture and society. By the 18th century, Mughal Bengal emerged as a quasi-independent state. 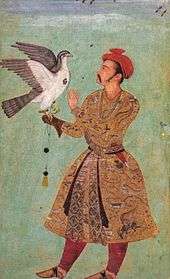 British soldiers firing at Bengali forces underneath a mango orchard in Plassey, 1757

After the defeat of Sultan Daud Khan Karrani at Rajmahal in 1576, Emperor Akbar announced the creation of the Subah of Bengal. By the 17th century, the Mughals subdued opposition from the Baro-Bhuyans landlords, notably Isa Khan. Bengal was integrated into a powerful and prosperous empire; and shaped by imperial policies of pluralistic government. The Mughals built a new imperial metropolis in Dhaka from 1610, with well-developed fortifications, gardens, tombs, palaces and mosques. It served as the Mughal capital of Bengal for 75 years.[1] The city was renamed in honour of Emperor Jahangir. Dhaka emerged as the commercial capital of the Mughal Empire, given that it was the centre for the empire's largest exports: cotton muslin textiles.[2]

The Mughal conquest of Chittagong in 1666 defeated the Kingdom of Arakan and reestablished Bengali control of the port city, which was renamed as Islamabad.[3] The Chittagong Hill Tracts frontier region was made a tributary state of Mughal Bengal and a treaty was signed with the Chakma Circle in 1713.[4]

Between 1576 and 1717, Bengal was ruled by a Mughal viceroy. Members of the imperial family were often appointed to the position. Viceroy Prince Shah Shuja was the son of Emperor Shah Jahan. During the struggle for succession with his brothers Prince Aurangazeb, Prince Dara Shikoh and Prince Murad Baksh, Prince Shuja proclaimed himself as the Mughal Emperor in Bengal. He was eventually defeated by the armies of Aurangazeb. Shuja fled to the Kingdom of Arakan, where he and his family were killed on the orders of the King of Mrauk U. Shaista Khan was an influential viceroy during the reign of Aurangazeb. He consolidated Mughal control of eastern Bengal. Prince Muhammad Azam Shah, who served as one of Bengal's viceroys, was installed on the Mughal throne for four months in 1707. Viceroy Ibrahim Khan II gave permits to English and French traders for commercial activities in Bengal. The last viceroy Prince Azim-us-Shan gave permits for the establishment of the British East India Company's Fort William in Calcutta, the French East India Company's Fort Orleans in Chandernagore and the Dutch East India Company's fort in Chinsura. During Azim-us-Shan's tenure, his prime minister Murshid Quli Khan emerged as a powerful figure in Bengal. Khan gained control of imperial finances. Azim-us-Shan was transferred to Bihar. In 1717, the Mughal Court upgraded the prime minister's position to the hereditary Nawab of Bengal. Khan founded a new capital in Murshidabad. His descendants formed the Nasiri dynasty. Alivardi Khan founded a new dynasty in 1740. The Nawabs ruled over a territory which included Bengal proper, Bihar and Orissa.

The authority of the Mughal Court rapidly disintegrated in the 18th century, especially after the invasion of Nader Shah. In Bengal, the system saw most wealth hoarded by the elites, with low wages for manual labour. The Nawabs of Bengal entered into treaties with numerous European colonial powers, including joint-stock companies representing Britain, Austria, Denmark, France and the Netherlands. By the late-18th century, the British East India Company emerged as the foremost military power in the region, defeating the French-allied Siraj-ud-Daulah at the Battle of Plassey in 1757, that was largely brought about by the betrayal of the Nawab's once trusted general Mir Jafar. The company gained administrative control over the Nawab's dominions, including Bengal, Bihar and Orissa. It gained the right to collect taxes on behalf of the Mughal Court after the Battle of Buxar in 1765. Bengal, Bihar and Orissa were made part of the Bengal Presidency and annexed into the British colonial empire in 1793. The Indian mutiny of 1857 formally ended the authority of the Mughal court, when the British Raj replaced Company rule in India. 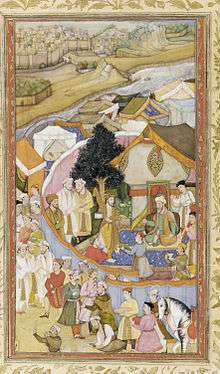 The following table covers a list of notable military engagements by Mughal Bengal:-

The Mughals launched a vast economic development project in the Bengal delta which transformed its demographic makeup.[5] The government cleared vast swathes of forest in the fertile Bhati region to expand farmland. It encouraged settlers, including farmers and jagirdars, to populate the delta. It assigned Sufis as the chieftains of villages. Emperor Akbar readapted the modern Bengali calendar to improve harvests and tax collection. The region became the largest grain producer in the subcontinent.

Mughal architecture proliferated Bengal in the 16th, 17th and 18th centuries, with the earliest example being the Kherua Mosque in Bogra (1582).[6] They replaced the earlier sultanate-style of architecture. It was in Dhaka that the imperial style was most lavishly indulged in. Located on the banks of the Buriganga River, the old Mughal city was described as the Venice of the East.[7] Its Lalbagh Fort was an elaborately designed complex of gardens, fountains, a mosque, a tomb, an audience hall (Diwan-i Khas) and a walled enclosure with gates. The Great Caravanserai and Shaista Khan Caravanserai in Dhaka were centers of commercial activities. Other monuments in the city include the Dhanmondi Shahi Eidgah (1640), the Sat Gambuj Mosque (ca. 1664–76), the Shahbaz Khan Mosque (1679) and the Khan Mohammad Mridha Mosque (1704).[6] The city of Murshidabad also became a haven of Mughal architecture under the Nawabs of Bengal, with the Caravanserai Mosque (1723) being its most prominent monument.

In rural hinterlands, the indigenous Bengali Islamic style continued to flourish, blended with Mughal elements. One of the finest examples of this style is the Atiya Mosque in Tangail (1609).[6] Several masterpieces of terracotta Hindu temple architecture were also created during this period. Notable examples include the Kantajew Temple (1704) and the temples of Bishnupur (1600-1729).

An authentic Bengali-Mughal art was reflected in the muslin fabric of Jamdani (meaning "flower" in Persian). The making of Jamdani was pioneered by Persian weavers. The art passed to the hands of Bengali Muslim weavers known as juhulas. The artisan industry was historically based around the city of Dhaka. The city had over 80,000 weavers. Jamdanis traditionally employ geometric designs in floral shapes. Its motifs are often similar to those in Iranian textile art (buta motif) and Western textile art (paisley). Dhaka's jamdanis enjoyed a loyal following and received imperial patronage from the Mughal court in Delhi and the Nawabs of Bengal.[8][9]

A provincial Bengali style of Mughal painting flourished in Murshidabad during the 18th century. Scroll painting and ivory sculptures were also prevalent.

There was a significant influx of migrants from the Safavid Empire into Bengal during the Mughal period. Persian administrators and military commanders were enlisted by the Mughal government in Bengal.[10] An Armenian community settled in Dhaka and dominated the city's textile trade, paying a 3.5% tax.[11]

The Bengal Subah had the largest regional economy in the Mughal Empire. It was described as the paradise of nations. 50% of the gross domestic product of the empire was generated in Bengal. The region exported grains, fine cotton muslin and silk, liquors and wines, salt, ornaments, fruits, metals and pearls. European companies set up numerous trading posts in Mughal Bengal during the 17th and 18th centuries. Dhaka was the largest city in Mughal Bengal and the commercial capital of the empire. Chittagong was the largest seaport, with maritime trade routes connecting the port city to Arakan, Ayuthya, Balasore, Aceh, Melaka, Johore, Bantam, Makassar, Ceylon, Bandar Abbas, Mecca, Jeddah, Basra, Aden, Masqat, Mocha and the Maldives.[12][13][14]

In the revenue settlement by Todar Mal in 1582, Bengal Subah was divided into 24 sarkars (districts), which included 19 sarkars of Bengal proper and 5 sarkars of Orissa. In 1607, during the reign of Jahangir Orissa became a separate Subah. These 19 sarkars were further divided into 682 parganas.[15] In 1658, subsequent to the revenue settlement by Shah Shuja, 15 new sarkars and 361 new parganas were added. In 1722, Murshid Quli Khan divided the whole Subah into 13 chakalahs, which were further divided into 1660 parganas.

Initially the capital of the Subah was Tanda. On 9 November 1595, the foundations of a new capital were laid at Rajmahal by Man Singh I who renamed it Akbarnagar.[16] In 1610 the capital was shifted from Rajmahal to Dhaka[17] and it was renamed Jahangirnagar. In 1639, Shah Shuja again shifted the capital to Rajmahal. In 1660, Muazzam Khan (Mir Jumla) again shifted the capital to Dhaka. In 1703, Murshid Quli Khan, then diwan (prime minister in charge of finance) of Bengal shifted his office from Dhaka to Maqsudabad and later renamed it Murshidabad. 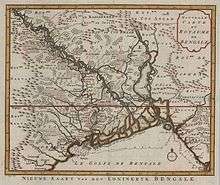 A 16th century map of Bengal

Territory ruled by the Nawab of Bengal, including Bengal proper, Bihar and Orissa

The sarkars (districts) and the parganas (tehsils) of Bengal Subah were:[15]

The state government was headed by a Viceroy (Subedar Nizam) appointed by the Mughal Emperor between 1576 and 1717. The Viceroy exercised tremendous authority, with his own cabinet and four prime ministers (Diwan). The three deputy viceroys for Bengal proper, Bihar and Orissa were known as the Naib Nazims. An extensive landed aristocracy was established by the Mughals in Bengal. The aristocracy was responsible for taxation and revenue collection. Land holders were bestowed with the title of Jagirdar. The Qadi title was reserved for the chief judge. Mansabdars were leaders of the Mughal Army, while faujdars were generals. The Mughals were credited for secular pluralism during the reign of Akbar, who promoted the religious doctrine of Din-i Ilahi. Later rulers promoted more conservative Islam.

In 1717, the Mughal government replaced Viceroy Azim-us-Shan due to conflicts with his influential deputy viceroy and prime minister Murshid Quli Khan.[18] Growing regional autonomy caused the Mughal Court to establish a hereditary principality in Bengal, with Khan being recognized in the official title of Nazim. He founded the Nasiri dynasty. In 1740, following the Battle of Giria, Alivardi Khan staged a coup and founded the short-lived Afsar dynasty. For all practical purposes, the Nazims acted as independent princes. European colonial powers referred to them as Nawabs or Nababs.[19] 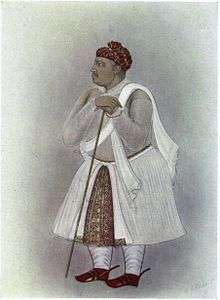 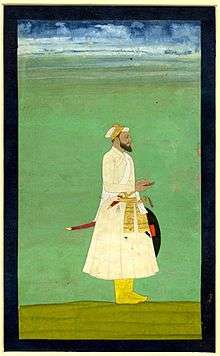 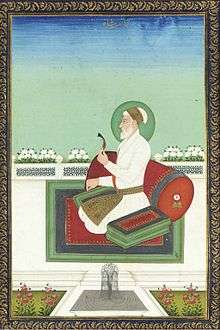 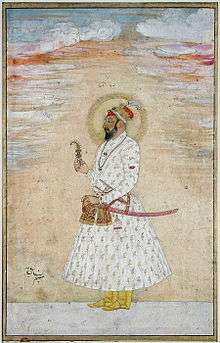