This article is about the municipality in Madhya Pradesh, India. For its namesake district, see Burhanpur District.

Burhanpur is a mid-size city in Madhya Pradesh state, India. It is the administrative seat of Burhanpur District. It is situated on the north bank of the Tapti River, 340 kilometres (211 mi) southwest of Bhopal and 540 kilometres (336 mi) northeast of Mumbai. The city has a Municipal Corporation, and also is one of the district headquarters of the state of Madhya Pradesh. 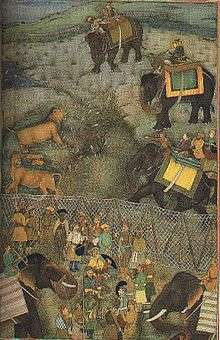 Burhanpur was an important city under Rashtrakuta Dynasty during 753–982. During excavations in Tapti River & Asirgarh Fort many coins, goddess idols and temples discovered which belongs to prehistoric era. But, Burhanpur got its name and fame during medieval time.

In 1388, Malik Nasir Khan, the Faruqi dynasty Sultan of Khandesh discovered Burhanpur, at the behest of Shaikh Zainuddin and renamed it after a well-known medieval sufi saint, Burhan-ud-Din. Burhanpur became the capital of the Khandesh sultanate. Later, Miran Adil Khan II (reigned 1457–1501), another sultan of this dynasty built a citadel and a number of palaces in Burhanpur.[1] During his long reign, Burhanpur was transformed into a major centre for trade and textile production. In 1601, Mughal emperor Akbar annexed the Khandesh sultanate and Burhanpur became the capital of Khandesh Subah of the Mughal empire.[2] In 1609 Jahangir appointed his second son Parviz to the governorship of the Mughal provinces of the Deccan, and the prince chose Burhanpur as his headquarters as his residence. 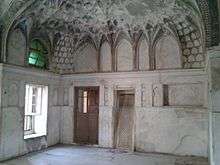 It is a beautiful city with a lot of historical monuments existing in its expanse, primarily from the ruling times of Shah Jahan, the great Mughal emperor. Burhanpur was an important outpost of the Mughals. Shah Jahan spent a considerable time in this city, and helped add to the Shahi Qila. The Shahi Qila is one majestic palace in Burhanpur, located to the east of the Tapti River. Diwan-i-Aam and Diwan-i-Khas were built on the terrace of the Qila. Little of it remains today as the Qila is mostly in ruins now. However, the parts of the Palace that still stands displays amazing works of sculpture and exquisite carvings. The main attraction at the palace is the hamam or the royal bath. It was specifically built for Shah Jahan's wife, Begum Mumtaz Mahal, so that she could enjoy a luxurious bath. It is said that she died here giving birth to her fourteenth child. Even today, the ceiling has many intricate paintings. One of these paintings depicts a monument which is said to have been the inspiration for the Taj Mahal.[3]

In 1681, Burhanpur was raided by Sambhaji, In this campaign, he was joined by his general Hambirrao Mohite.

Santaji Ghorpade attacked Burhanpur and Khandesh subha to force Aurangzeb to deploy more forces in Khandesh. This act by Santaji relieved some pressure of Mughal armies from Karnataka and Maratha swaraj ya.

The city was taken by Peshwa Bajirao during his reign to Malwa and Delhi. Maratha army under Sadashivrao Bhau who defeated the Nizam of Hyderabad and took control of the town. In 1761 the Maratha army marched for Third Battle Of Panipat from the city.

At the down fall of Marathe Empire city went to Maratha Sardar Holkar, Scindia, and then finally 1818 handed over to British by Marathas.[4] 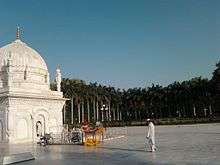 Burhanpur is gifted with large number of tourist spots. Firstly credited as a glorious past, that it has been ruled by several dynasties,[6] it got many Historical places to be proud of. Secondly, the benefit of having three rivers, Tapti, Utavali & Mohna; has given many beautiful natural sights to Burhanpur. This small town has four small ghats. Being the home of a very diverse population, Burhanpur has an all India famous Gurudwara,[7] Masjid,[8] Church, a world-famous Dargah [9]& many well known Temples such as Swami Narayan Temple, Ganesh Temple etc.

Apart from this, it is largest producer of Banana in Madhya pradesh.