Jesuit and Capuchin missionaries began to work among the Syriac Orthodox in Aleppo in 1626. So many of them were received into communion with Rome that in 1662, when the Patriarchate had fallen vacant, the Catholic party was able to elect one of its own, Andrew Akijan, as Patriarch of the Syriac Church. This provoked a split in the community, and after Akijan’s death in 1677 two opposing patriarchs were elected, one being the uncle of the other, representing the two parties (one pro-Catholic, the other anti-Catholic). But when the Catholic Patriarch died in 1702, this very brief line of Catholic Patriarchs upon the Syriac Church's See of Antioch died out with him.

Later, in 1782, the Syriac Orthodox Holy Synod elected Metropolitan Michael Jarweh of Aleppo as Patriarch. Shortly after he was enthroned, he declared himself Catholic and in unity with the Pope of Rome. Since Jarweh there has been an unbroken succession of Syriac Catholic Patriarchs. 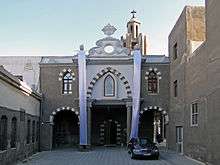 Seat of the Syriac Catholic Church in Damascus

The Syriac Catholic Church was originally part of the Syriac Orthodox Church, which was originally part of the Catholic Church. It was established by Saint Peter prior to his departure to Rome, and extends it roots back to the origins of Christianity in the Orient; in the Acts of the Apostles we are told that it is in Antioch where the followers of Jesus for the first time were called "Christians" (Acts 11:26).

In the time of the first Ecumenical Councils, the Patriarch of Antioch held the ecclesiastical authority over the Diocese of the Orient, which was to be extended from the Mediterranean Sea to the Persian Gulf. Its scholarly mission in both languages: the Greek and Syriac was to provide the world and the Universal Church with eminent saints, scholars, hermits, martyrs and pastors. Among these great people are Saint Ephrem (373), Doctor of the Church, and Saint Jacob of Sarug (521).

During the Crusades Catholicism began to have an influence over the local Christians in the region, and there were many examples of warm relations between Catholic and Syriac Orthodox bishops. Some of these bishops favored union with Rome, but there was no push to unify until a decree of union between the Syriac Orthodox and Rome was signed at the Council of Florence November 30, 1444- but the effects of this decree were rapidly annulled by opponents of it in the Syriac Churches hierarchy.

Split with the Syriac Orthodox Church

After the split up until modern times

After becoming officially recognized by the Ottoman Government in 1845 the Syriac Catholic Church expanded rapidly. However, The expansion was ended by the persecutions and massacres that took place during the Assyrian genocide of World War I. After that, the Syriac Catholic Patriarchal See was moved to Beirut away from Mardin, to which many Ottoman Christians had fled the Genocide. In addition to its see in Beirut, The patriarchal seminary and printing house are located at Sharfeh Monastery in Sharfeh, Lebanon.

As of 2013 the Patriarch of Antioch (an Ancient major see, where several Catholic and Orthodox Patriarchates reside, at least nominally) was Moran Mor Ignatius Joseph III Younan, resident in Beirut, Lebanon. The Syriac Catholic Patriarch always takes the name "Ignatius" in addition to another name.

The Syriac Church leadership has produced a variety of scholarly writings in a variety of topics. For example, Patriarch Ephrem Rahmani was widely praised for his work in Syriac and is responsible for Pope Benedict XV recognising Saint Ephrem as a Doctor of the Catholic Church.[5] Likewise Patriarch Ignatius Behnam II Beni is known for imploring eastern theology to defend the Primacy of Rome.[6]

The Patriarch of Antioch and all the East of the Syrians presides upon the Patriarchal Eparchy of Beirut and leads spiritually all the Syriac Catholic Community around the world.

The Syriac Catholic Church was formally and officially united with the Holy See of Rome in 1781.

The Syriac Rite is rooted in the old tradition of both the churches of Jerusalem and Antioch and has ties with the ancient Jewish Berakah and is usually called the Western Syriac Rite.

The Syriac Catholic Church follows a similar tradition to other Eastern Catholic Churches who use the West Syrian Rite, such as the Maronites and Syro-Malankara Christians. This rite is clearly distinct from the Greek Byzantine rite of Antioch of the Melkite Catholics and their Orthodox counterparts. Syriac Catholic priests were traditionally bound to celibacy by the Syriac Catholic local Synod of Sharfeh in 1888, but there are now a number of married priests.

Distinction between the Anaphora and the Liturgy

Often when compared with the Latin Church the meaning of Anaphora and Liturgy can be mixed up. However, there is a clear distinction in the Syriac Church. The Liturgy of St James the Just is the skeleton of the whole Qurbono Qadisho with all the prayers before the Anaphora being exactly the same no-matter which anaphora used. The Liturgy of St James the Just comprises:

In the books of the Patriarchal Sharfet seminary, this order is clearly strict, with the Deacon and Congregation prayer being the same no matter which Anaphora is used. The only prayer that changes when a different Anaphora is used is that of the priest.

The Syriac Catholic Church uses fans with bells on them and engraved with seraphim during the Qurbono. Usually someone in the minor orders would shake these fans behind a Bishop to symbolise the Seraphim. They are also used during the consecration where two men would shake them over the altar during moments in the epliclesis and words of institution when the priest says "he took and broke" and "this is my body/blood". 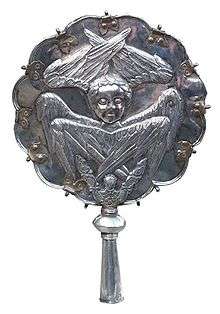 The thurible of the Syriac Catholic Church consists of 9 bells, representing the 9 levels of angels.

Liturgical symbols are used when a bishop is not present and used at similar times to when the fans are used.

Liturgy of the Hours

The Liturgy of the Hours is exactly the same as in the Syriac Orthodox. There are two versions of this the Phenqitho and the Shhimo. The former is the more complicated 7 volume version. While the latter is the simple version.

Likewise the ranking of clerics in the Syriac Church is extremely similar to that of the Syriac Orthodox Church. The most notable differences are:

The liturgical language of the Syriac Catholic Church, Syriac, is a dialect of Aramaic. The Qurbono Qadisho (literally: Holy Mass or Holy Offering/Sacrifice) of the Syriac Church uses a variety of Anaphoras, with the Anaphora of the 12 Apostles being the one mostly in use with the Liturgy of St James the Just.

Their ancient semitic language is known as Aramaic (or "Syriac" after the time of Christ since the majority of people who spoke this language belonged to the province of "Syria"). It is the language spoken by Jesus, Mary and the Apostles. Many of the ancient hymns of the Church are still maintained in this native tongue although several have been translated into Arabic, English, French and other languages.

Syriac is still spoken in some few communities in eastern Syria and northern Iraq, but for most Arabic is the vernacular language.[1]

Throughout the History of the Syriac Church there have been many martyrs. A recent example is Flavianus Michael Malke.

On 31 October 2010, 58 Iraqi Syriac Catholics were killed by Muslim extremists while attending Sunday Mass, 78 others were wounded. The attack by the radical terrorist organization Islamic State of Iraq on the congregation of Our Lady of Deliverance Syriac Catholic Church was the bloodiest single attack on an Iraqi Christian church in recent history.[8]