Thanjavur Marathas of the Bhonsle dynasty, were the rulers of Thanjavur principality of Tamil Nadu between the 17th to the 19th century C.E. Their native language was Marathi. Venkoji was the founder of the dynasty.

Following the demise of Chola rule in the 13th century, the Thanjavur country came under the rule of the Pandyas who ruled for about a century. Following the invasion of Malik Kafur, the Tanjore country fell into disorder. The rule of the Delhi Sultanate lasted for half a century before Pandya chieftains reasserted their independence. Soon afterwards, however, they were conquered by the Vijayanagara Empire. The supremacy of Vijayanagar was challenged by the Nayaks of Madurai who eventually conquered Thanjavur in 1646. The rule of the Thanjavur Nayaks lasted until 1673 when Chokkanatha Nayak the ruler of Madurai invaded Thanjavur and killed the ruler Vijayaraghava.

Chokkanatha placed his brother Alagiri on the throne of Thanjavur, but within a year the latter threw off his allegiance, and Chokkanatha was forced to recognise the independence of Thanjavur. A son of Vijaya Raghava induced the Bijapur Sultan to help him get back the Thanjavur throne. In 1675, the Sultan of Bijapur sent a force commanded by the Maratha general Venkoji (alias Ekoji) to recapture the kingdom from the new invader. Venkoji defeated Alagiri, and occupied Thanjavur. He did not, however, place his protege on the throne as instructed by the Bijapur Sultan, but seized the kingdom and made himself king. Thus began the rule of the Marathas over Thanjavur.

Venkoji, a half-brother of the great Maratha king Shivaji was the first Raja of Thanjavur from the Bhosale dynasty. It is believed that he took over the administration of Thanjavur in April 1674 and ruled till 1684. During his reign, his brother Shivaji invaded Gingee and Thanjavur in 1676–1677 and made his brother Santaji the ruler of all lands to the north of the Coleroon. During the last years of his reign, Venkoji also allied with Chokkanatha of Madurai to repulse an invasion from Mysore..

Main article: Shahuji I of Thanjavur

Shahuji I was the eldest son of Venkoji and he ascended the throne at the age of twelve. During his reign, the Mughals occupied the Coromandel coast and Tiruchirapalli and forced Shahuji I to pay tribute. Shahuji was a patron of literature. During his reign, there were frequent skirmishes and battles with the Raja of Madurai and Ramnad for control of the border lands.

Serfoji I was a younger son of Venkoji and he ruled from 1712 to 1728. His rule was marked by regular warfare and disputes with the Madurai Nayak.

Tukkoji, a younger brother of Serfoji I ruled Thanjavur from 1728 to 1736. His reign witnessed the invasion of Chanda Sahib and he is credited with having repulsed a Muhammedan invasion of Madurai.

Thuljaji was a very weak ruler and the last independent ruler of Thanjavur. In 1773, Thanjavur was annexed by the Nawab of the Carnatic who ruled till 1776. The throne was restored to him by the Directors of the British East India Company. But his restoration came at a heavy price as it deprived him of his independence.

Thuljaji was succeeded by his teenage son Serfoji in 1787. Soon afterwards, he was deposed by his uncle and regent Amarsingh who seized the throne for himself. With the help of the British, Serfoji II recovered the throne in 1798. A subsequent treaty forced him to hand over the reins of the kingdom to the British East India Company, becoming part of the Tanjore District (Madras Presidency). The district collectorate system was installed thereafter to manage the public revenues. Serfoji II was however left in control of the Fort and the surrounding areas. He reigned till 1832. His reign is noted for the literary, scientific and technological accomplishments of the Tanjore country.

Shivaji was the last Maratha ruler of Thanjavur and reigned from 1832 to 1855. He was a weak and feeble prince with barely any authority. As his First wife did not have any male heir, The Queen adopted her nephew, and the adoption took place after the Maharaja's (Shivaji II) death in 1855. The British did not accept this adoption and Thanjavur was annexed by them as per the provisions of the Doctrine of Lapse. 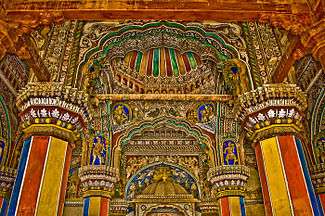 The Thanjavur Maratha Rajas favoured Sanskrit and Telugu to such an extent that classical Tamil began to decline. Most of the plays were in Sanskrit. Venkoji, the first ruler of the Bhonsle dynasty composed a 'Dvipada' Ramayana in Telugu. His son Shahuji was a great patron of learning and of literature. Most of the Thanjavur Maratha literature is from his period. Most of them were versions of the Ramayana or plays and short stories of a historical nature. Sanskrit and Telugu were the languages used in most of these plays while there were some Tamil 'koothu' as well. Advaita Kirtana is one of the prominent works from this period. Later Thanjavur rulers like Serfoji II and Shivaji immersed themselves in learning and literary pursuits when they were dispossessed of their empire. Serfoji built the Saraswathi Mahal Library within the precincts of the palace to house his enormous book and manuscript collection. Apart from Indian languages, Serfoji II was proficient in English, French, Dutch, Greek and Latin as well.

Map of the Thanjavur Maratha kingdom

The king was assisted in the administration of his country by a council of ministers. The supreme head of this council of ministers was a Mantri or Dalavoy. The Dalavoy was also the Commander-in-chief of the Army. Next in importance at the court was a Pradhani or Dewan also called Dabir Pandit. The country was divided into subahs, seemais and maganams in the decreasing order of size and importance. The five subahs of the country were Pattukkottai, Mayavaram, Kumbakonam, Mannargudi and Tiruvadi.

The ruler collected his taxes from the people through his mirasdars or puttackdars. They were collected right from the village level onwards and were based on the agricultural produce of the village. Rice was one of the primary crops in the region and the land used for cultivation was owned by big landlords. It was Anatharama Sashtry who proposed collecting taxes to improve conditions for the poor. No foreign trade was carried out. The only foreign trade in the country was carried out by European traders who paid a particular amount of money as rent to the Raja. The currency system used was that of a chakram or pon (1 chakram = one and three-fourths of a British East India Company rupee). Other systems of coinage used were that of pagoda (1 pagoda = three and a half Company rupees), a big panam (one-sixth of a Company rupee) and a small 'panam (one-thirteenth of a Company rupee).