Thiruvarur district (Composite Tanjore Dist) is one of the 32 districts in the Tamil Nadu state of India. The district occupies an area of 2161 km². It lies between Nagapattinam district on the east and Thanjavur District on the west, and is bounded by the Palk Strait on the south. The district headquarters is at Thiruvarur town. As of 2011, the district had a population of 1,264,277 with a sex-ratio of 1,017 females for every 1,000 males. 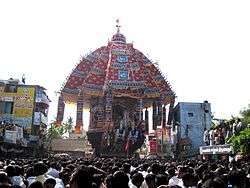 Thiruvarur district is made up of seven taluks: