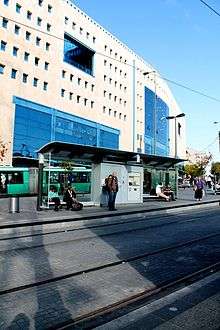 Transport in Jerusalem is characterized by a well-developed inter-city network and an emerging, developing intra-city network. Ben Gurion International Airport serves as Jerusalem's closest international airport. Egged bus lines and Israel Railways connect the city of Jerusalem to much of Israel, and a high-speed rail line to the airport and Tel Aviv is currently under construction. Within the city, the roads, rather than the rails, are the primary mode of transportation.

Begin Highway (Highway 50) is the western inner city expressway in Jerusalem. It runs north to south from Atarot to Manahat (Malha), and is being extended to link further south into Highway 60 to Gush Etzion. The northern end of the highway is fed by Highway 443 from Tel Aviv and Modiin. The Atarot-Talpiot route (Highway 60) is the main route which traverses the center of the city; and Herzl Boulevard, which begins at the northern entrance of the city and continues south via Mount Herzl and the Yad Vashem Holocaust memorial. It then merges into additional routes that lead to the southwestern quarters. The Golomb-Herzog-Ben-Zvi route also links the southern quarters with the city center.

Running east through the city center, Jaffa Road connects the Jaffa Gate of the Old City as well as the central-eastern neighbourhoods and the northwestern city entrance to Highway 1. Highway 1 bypasses the city-centre to the north as Yigael Yadin Boulevard, and links Ma'ale Adummim to Begin Highway near Ramot.

Construction is progressing on parts of a 35-kilometer (22-mi) ring road around the city, fostering faster connection between the suburbs and the city center.[1][2] The eastern half of the project was conceptualized decades ago, but reaction to the proposed highway is still mixed.[1]

Jerusalem Central Bus Station is West Jerusalem's intercity bus station. The part of the city is served mainly by Egged buses, though as of 2009, a number of other companies are providing an increasing number of bus lines to and from the city also; as of 2009, Dan and Superbus also use the Central Bus Station. City buses in West Jerusalem are run by Egged, which runs close to 100 bus lines throughout the city and its suburbs. A map of the various lines may be accessed on MobileMe[3]

Palestinian-run buses serve the city's Palestinian neighborhoods as well as Palestinian towns in the West Bank and Israeli Arab towns. This system is based out of the East Jerusalem Central Bus Station on Sultan Suleiman Street, though buses also leave from outside the Damascus Gate of the Old City.

The Egged and the Palestinian city bus networks are almost completely separated. There are only a handful of bus stops that both companies serve. Palestinian residents of Jerusalem do indeed use Egged buses, but Jewish residents rarely use the Palestinian buses, in part because while Palestinians do occasionally visit West Jerusalem, Jews do not frequently come to the Palestinian parts of the city. 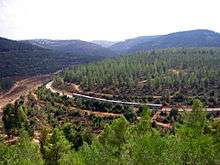 Israel Railways operates train service to southern Jerusalem with 2 stops: Jerusalem Malha near the Malha Mall and the Biblical Zoo. The rail line, which first opened in 1892, was out of use for seven years because of deteriorating conditions and was restored on April 9, 2005. Jerusalem Malha is a new station which replaces the historical Khan Station at Remez Square near the Old City.

A new high-speed rail link is under construction which will run from Tel Aviv to Jerusalem via Ben Gurion Airport and terminate at a new underground station, Binyanei HaUmah, located between the Jerusalem Central Bus Station and the International Convention Center. The new rail link is expected to open by 2018, with an expected transit time from Tel Aviv of about 30 minutes. 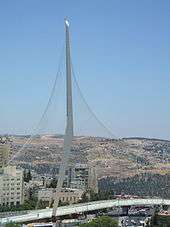 The first line of the Jerusalem Light Rail network was completed in 2010 with the erection of Santiago Calatrava's Chords Bridge over Jaffa Road. The first line began operating from Pisgat Ze'ev in the northeast, through French Hill and Jaffa Road to the Central Bus Station and the southwestern neighborhoods.[4] The line was fully operational by late 2011, after several delays, with 14 trains and a maximum headway of 12 minutes.

Atarot Airport was Jerusalem's airport, but was closed to civilian traffic in 2000 due to security concerns arising from the Al-Aqsa Intifada,[5] and was later placed under IDF control during 2001.[6] But Ben Gurion International Airport, 40 km (24 Mi) northwest of the city, serves as the primary international air transport hub for both Jerusalem and Tel Aviv. As the largest of the nation's four international airports (the others located in Haifa, Eilat and Ovda, though the former two are unable to handle the largest aircraft), Ben Gurion is Israel's busiest airport, serving 13 million passengers annually.[7]