U.S. Route 127 (US 127) is a 758-mile-long (1,220 km) north–south U.S. Highway in the eastern half of the United States. The southern terminus of the route is at US 27 in Chattanooga, Tennessee. The northern terminus is at Interstate 75 (I-75) near Grayling, Michigan. Since 1987, it has been the core of the annual World's Longest Yard Sale, also known as the Highway 127 Corridor Sale (127 Yard Sale), which now stretches 690 miles (1,110 km) from Addison, Michigan, to Gadsden, Alabama. The sale, held every August, was started to demonstrate that the older U.S. Highway System has something to offer that the Interstate Highway System does not.[2]

In Tennessee, US 127 traverses rural areas of the Cumberland Plateau in eastern Middle Tennessee and western East Tennessee, passing southward through the cities of Jamestown and Crossville, then follows the Sequatchie Valley, passing through the cities of Pikeville and Dunlap. Near Dunlap the route turns southeastward to cross Walden Ridge, passing Signal Mountain and ending at its junction with US 27 in the northern Chattanooga suburb of Red Bank.

In Kentucky, US 127 is cosigned with US 42 through Cincinnati's Northern Kentucky suburbs until five miles (8.0 km) east of Warsaw, then passes south through Owenton. This was the road driven by Buddy Rich when he wrote "Blue Grass makes me Blue" in 1947.[3] At the state capital of Frankfort, it becomes a four-lane highway, then skirts Lawrenceburg, Harrodsburg, and Danville. It enters the hilly Knobs Region at Junction City, where it becomes a two-lane route, and continues through Hustonville, crossing the drainage divide between the Kentucky and Green river watersheds and roughly following the scenic upper Green River valley through Casey County, crossing the river at Liberty. South of Dunnville it climbs onto the Eastern Pennyroyal Plateau and cuts through Russell Springs and Jamestown. It crosses Wolf Creek Dam, which creates Lake Cumberland. It runs very briefly with KY 90 north of Albany and crosses into Tennessee at Static. The new route through Clinton County includes a bypass west of Albany; the original plan for a more direct eastern route was abandoned because of historic and scenic concerns. In the county US 127 runs through sinkhole plains along the escarpment that marks the western edge of the Cumberland Plateau, creating scenic views.

US 127 serves several cities and rural communities along the extreme western edge of Ohio, including Bryan, Paulding, Van Wert, Celina, Greenville, Eaton, Somerville, Seven Mile, New Miami, and Cincinnati. In Cincinnati, it shares a short concurrency with its parent route, US 27, along with US 42. From there, it heads north through Fairfield and Hamilton. The highway is a four-lane, divided by-pass around Greenville. US 127 crosses the Ohio Turnpike near West Unity, but does not intersect with it. It also joins with US 36 for about 5 miles (8 km). The last city that US 127 goes through before reaching Michigan is Bryan. The last city US 127 goes through before entering Kentucky is Cincinnati.

Except for Defiance County, US 127 passes through (or formerly passed through, in the case of Greenville) the county seats of all nine counties in Ohio (which are all nine counties of Ohio that share a border with Indiana) it traverses. 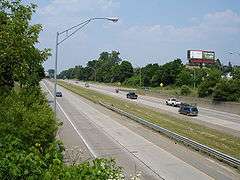 US 127 through Lansing, Michigan. Much of the route is a four-lane freeway through this state.

The highway is the primary route connecting Lansing and central Michigan to Northern Michigan and the Mackinac Bridge; it serves the cities of Jackson, Lansing, and Clare. From the south side of Jackson northerly, it is mostly a four-lane freeway, with the notable exception of a 16-mile (26 km) stretch from north of St. Johns to just south of Ithaca, where access to the road is not limited and speeds were initially restricted to 55 miles per hour (89 km/h), but are now, as of April 5, 2010, only limited to 65 miles per hour (105 km/h).[6]

Prior to 2002, US 127 ran from I-69 north of East Lansing southerly to the Ohio border near Hudson, a total of 83 miles (134 km).[7][8] From the Ohio border until Jackson, the highway follows the course (with minor deviations) of the Michigan Meridian used to survey Michigan in the early 19th century. That stretch is generally named Meridian Road.[9]

A proposed I-73 would incorporate US 127 between Jackson and Grayling.[10]

US 127 originally terminated at Toledo when it was commissioned in 1926. At that time, the southern portion ran from Somerset to Toledo along the route of present-day U.S. Route 223. In 1930 the southern terminus moved to Cincinnati, and in 1958 it was extended to its present southern terminus at Chattanooga.[11]

The northern terminus of US 127 was in or near Lansing, Michigan, from its inception in 1926 to 2002. In 2002, the terminus was moved to an intersection with I-75 south of Grayling in Crawford County, Michigan, replacing all of US 27 north of Lansing.[7][8]

US 70N in Crossville

I‑40 in Crossville
Kentucky

Future I‑66 in Russell Springs

US 150 in Danville. The highways travel concurrently through Danville.

US 68 northeast of Harrodsburg

US 421 in Frankfort. The highways travel concurrently through Frankfort.

US 42 north-northeast of Glencoe. The highways travel concurrently to .

US 25 in Florence. The highways travel concurrently to the Ohio state line.

I‑275 in Crestview Hills

US 27 / US 52 in Cincinnati. The highways travel concurrently through Cincinnati.

US 40 west of Lewisburg

US 36 west-northwest of Jaysville. The highways travel concurrently to Greenville.

US 33 southeast of Rockford

US 6 south of Bryan

US 20 east of Alvordton. The highways travel concurrently to west of Fayette.
Michigan

US 223 southeast of Somerset

US 12 east of Somerset

I‑96 / I‑496 at Michigan State University south-southeast of Lansing. I-496/US 127 travels concurrently to East Lansing.

I‑69 north-northwest of East Lansing

US 10 in Clare. The highways travel concurrently to north-northwest of Clare.

I‑75 south of Grayling