Warsaw is a city in and the county seat of Gallatin County, Kentucky, United States,[1] along the Ohio River. The name was suggested by a riverboat captain, who was reading Thaddeus of Warsaw, by Jane Porter, at the time. The city had a population of 1,811 at the 2000 census.

Warsaw began as a landing on the Ohio River in 1798 called Great Landing. In 1805, founder Colonel Robert Johnson surveyed and built a road from this landing to his former home in Scott County, Kentucky. The landing soon became a busy shipping port.

In 1814, Colonel Johnson and Henry Yates purchased 200 acres (81 ha) to establish a river town to be named Fredericksburg, after Johnson's hometown in Virginia. By 1815, the town plot was complete. The Town extended from the River to Market Street and included 172 numbered lots, each 28½ by 99 feet (30 m).

In 1831, the town was renamed Warsaw so the townspeople could have a post office. The post office was established July 18, 1832, with W.F. Clinton as postmaster. He was appointed by president Andrew Jackson. In 1837, the Gallatin County, Kentucky seat was moved from Port William (now Carrollton) to Warsaw. The courthouse now being the oldest operating one in the state. The oldest home in Warsaw is the Henry Yates House, a home built of log construction was built circa 1809.

On December 4, 1868, 80 people died in the Ohio River steamboat collision of the United States and the America near Warsaw.

The Warsaw Historic District was named to the National Register of Historic Places in 1982. It is roughly bounded by W. High, E. Franklin, Washington, Market, Main, 3rd, 4th and Cross Streets. It features Italinate and Gothic Revival architecture. 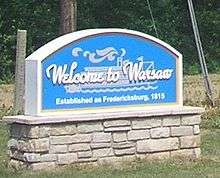 There were 737 households out of which 30.8% had children under the age of 18 living with them, 40.2% were married couples living together, 14.9% had a female householder with no husband present, and 38.7% were non-families. 33.6% of all households were made up of individuals and 16.6% had someone living alone who was 65 years of age or older. The average household size was 2.31 and the average family size was 2.93.

Richard Yates was born in 1818. His family moved to Illinois in 1831. He subsequently studied law at Transylvania University in Kentucky. He went on to serve in the Illinois House of Representatives, in the United States House of Representatives, and finally as Governor of Illinois in 1860. He would later go on to serve in the Senate. Yates was an outspoken critic of slavery and as governor helped promote the Union cause during the American Civil War.[5]

In 1844, Carlotta Thompkins was born to a wealthy plantation owner. Her father, an ardent gambler, taught her the art of gaming from a very young age. In her early adulthood Carlotta went on to travel the Mississippi River looking for gambling opportunities. She ended up in Texas traveling the frontier and becoming one of the most well-known gamblers in the Old West. She became known as "Lottie Deno," the name which writers and storytellers would use in later years.[6]

Lucy Montz was the first woman in Kentucky to practice dentistry. The Dr. Lucy Dupuy Montz House was listed on the National Register of Historic Places in 1978.[7]