U.S. Route 24 (US 24) is one of the original United States highways of 1926.[2] It originally ran from Pontiac, Michigan, in the east to Kansas City, Missouri, in the west. Today, the highway's eastern terminus is in Independence Township, Michigan, at an intersection with I-75 and its western terminus is near Minturn, Colorado at an intersection with I-70. The transition from north–south to east–west signage is in Toledo, Ohio. 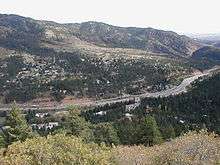 U.S. Route 24 looking out on Cascade, Colorado, viewed from the Pikes Peak Highway

In Colorado, US 24 runs from Interstate 70 (and implicitly with, U.S. Route 6) from Minturn[3] where it goes through Minturn and continues south to the Continental Divide at Tennessee Pass. It continues south to Johnson Village and then joins with U.S. Route 285 northbound to the Trout Creek Pass. After the pass, US 24 separates from US 285 and continues east to Colorado Springs and then northeast to Limon, where US 24 joins I-70 for most of the rest of its routing to the Kansas state line.

When the United States Highway System was started in 1926, US 24 in Colorado was designated U.S. Route 40S. It began in Grand Junction and went east along the current Interstate 70 corridor to Minturn, from which it follows the current route to Limon. From Limon east to the Kansas border, the current US 24 was designated U.S. Route 40N. US 40S west of Limon and US 40N east of Limon received the US 24 designation in 1936, when US 24 was extended west from Kansas City, Missouri. The segment between Grand Junction and Minturn was decommissioned in 1975.

The original designation for the current US-24 route in Kansas was U.S. Route 40N. It went from the Colorado border to Manhattan. In 1936, U.S. Route 24 received its current designation after an extension west from Kansas City.

In Missouri, US 24 serves Kansas City, Independence, Buckner, Lexington, Waverly, Carrollton, Keytesville, Moberly, Madison Monroe City, Palmyra and West Quincy. It is concurrent with U.S. Route 65 between Waverly and Carrollton, passing over the Missouri River via the Waverly Bridge when concurrent. After became a two-lane road, it is then concurrent with Highway 5 in Keytesville (where it is called Jackson Street), and then passes by the city of Huntsville before turning in a four-lane highway and crossing U.S. 63 at Moberly. It is finally concurrent (for the third time) with U.S. Route 36 east of Monroe City and with U.S. Route 61 from south of Palmyra to West Quincy. The segment shared with US 61 is part of the Avenue of the Saints.

Along the route within Independence is the Harry S. Truman Presidential Library and Museum.

As of 2006, it is the main arterial highway from Quincy northeast to Peoria.

From Quincy to Peoria, the route follows the old Peoria to Quincy stage coach route. John Jacob Astor was the original owner of the tract upon which Astoria was platted in 1836 and served as an important way station on the stage coach route. U.S. 24 travels onto the Shade-Lohman Bridge on interstate 474, and it gets off of exit 9.

From Peoria, US 24 runs directly east (parallel to Toledo, Peoria and Western Railway) through a number of small towns en route to Indiana and Fort Wayne, Indiana, the next major metropolitan center. US 24 crosses into Indiana at the state line east of Sheldon.

In Indiana, U.S. Route 24 runs east from the Illinois state line to Huntington. At Huntington, U.S. 24 turns northeast and runs to Fort Wayne; it then overlaps Interstate 69 and Interstate 469 to bypass the city before entering Ohio at the state line east of Fort Wayne. The segment of U.S. 24 between Logansport and Toledo, Ohio is part of the Hoosier Heartland Industrial Corridor project of the Intermodal Surface Transportation Efficiency Act.

From Fort Wayne, US 24 follows the path of the Maumee River towards Toledo. In Ohio, the roadway enters the state east of Woodburn, Indiana, near Antwerp. Between the Indiana state line and Toledo, this portion of the roadway is known as the Fort to Port segment of the Hoosier Heartland Industrial Corridor.

Between Napoleon and Toledo, modern US 24 lies north of the Maumee River as a highway built to Interstate Highway standards. Just north of Waterville is the site of the Battle of Fallen Timbers of 1794. General Anthony Wayne after, constructing a trail from Fort Wayne to (Fort) Defiance, fought and defeated an Indian consortium, thus opening northern Ohio to white settlement. At a point on the Toledo's north side US 24 veers from northwest–southeast to true north–south, turning on to Telegraph Road, while Detroit Avenue continues as a city street that connects to M-125 (Dixie Highway) at the Michigan border. US 24 is known as Telegraph Road from this point on, through the rest of the path north through Michigan until its northern terminus.

The path through Toledo of US 24 follows the course of old US 25, old US 25 being farther away from the course of north–south I-75. Partially truncated as a state route, what had been US 24 was renumbered as Ohio State Route 25 where it remained a state highway, and US 25 in greater Toledo became US 24.

In Michigan, U.S. Route 24 enters from Toledo, Ohio and serves the city of Monroe and the Detroit Metro Area, where it is known as Telegraph Road. It continues north through the western edge of Detroit. It passes through Michigan's "mixing bowl" (which is where the freeways I-696 (Walter P. Reuther Freeway), M-10 (John C. Lodge Freeway/Northwestern Highway), and Lahser Road intersect). US-24 continues north as Telegraph Road into Pontiac, Michigan where it turns toward a more northwesterly direction in Waterford, Michigan at an intersection with Dixie Highway and terminates at I-75 in Independence Township, Michigan.

Between Dixie Highway in Pontiac, Michigan and Laskey Road in Toledo, Ohio, the highway is known as Telegraph Road (see U.S. Route 24 in Michigan), named before the highway system existed after the telegraph wires it once ran parallel to. Mark Knopfler of the rock band Dire Straits wrote the song "Telegraph Road", about the development and decay of the road, which he spotted en route to a concert. It is a major surface route through western areas of Metro Detroit. The highway has 8 lanes and is often busy, particularly during rush hour.

US 24 (Telegraph Road) west of Detroit, Michigan served as a testing ground for the Michigan left automobile maneuver. Several other channelization techniques are also used; for instance the M-153 (Ford Road) intersection includes a southbound jughandle and a cutoff for northbound left-turning traffic.[5]

US 24 from Minturn, Colorado to Limon, Colorado is a former route of U.S. Route 40S. Between Limon and Manhattan, Kansas, US 24 follows the old route of US 40N.

As Michigan enacted alcohol prohibition earlier than Ohio, for a time this road was notorious for its use by bootleggers, bringing booze from Cincinnati, OH and Cleveland, OH into Detroit.

Fort to Port was first brought up in a meeting by Indiana State Representative Mitch Harper, in 1989. The project went from New Haven, Indiana to Toledo, Ohio. It was at this meeting the project name 'Fort to Port' was born. The most complex and expensive portion of the Indiana segment is reconstructing the parclo interchange with Interstate 469 in New Haven.

In November 2007, Indiana announced they would change their segment as an expressway with at-grade intersections at Bruick Road, Webster Road, and SR 101, instead of a freeway section with interchanges and overpasses. The only overpasses would be two narrow (12' wide) overpasses for non-motorized traffic (Amish buggies) to cross US 24. Also, the interchange of I-469 and US 24 would remain as-is with traffic signals at the US 24 ramp terminals. The cost savings without interchanges would be approximately $75–$80 million. Right of way would be purchased for future interchanges. This change has been unpopular due to safety concerns with the heavy truck traffic on the corridor. INDOT claims that the current traffic on US 24 does not justify interchanges, even though the 2005 Final EIS states that it does. 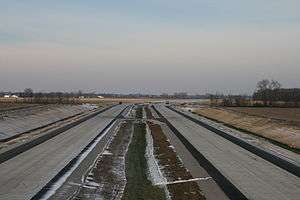 (December 2008) Completed section of US-24 Fort-to-Port Freeway in eastern Indiana. This segment opened to traffic on October 29, 2009.

Responding to widespread public outcry over the scaled-back design, Governor Mitch Daniels announced on December 12, 2007, that US 24 would have been built as a freeway initially from Bruick Road to the Ohio state line, with interchanges at SR 101 and Webster Road.[6] The entire 13.5-mile (21.7 km) segment is slated for completion in 2012. The intersection with Bruick Road was to have initially been an at-grade crossing, but INDOT announced in August 2009 that a grade-separated interchange will be built here as well.[7] As a result, Indiana's portion of US 24 will be built as an Interstate-quality freeway, except for the at-grade interchange with I-469. INDOT plans to eventually upgrade the I-469/US 24 interchange by adding flyover ramps to allow high-speed movements between the two highways, as was originally intended in the Fort-to-Port Final Environmental Impact Statement published in 2005. Depending on funding, this work may begin in 2013.

Upon completion, ownership of the existing US 24 will be transferred to Allen County, and become a frontage road east of Bruick Road, providing access to the B.F. Goodrich tire plant and adjacent homes and farmland. Indiana is financing construction through the Major Moves program, and will be reimbursed when federal highway funds become available. Sections of the two-lane road that have been bypassed by the freeway are now locally signed as "Old US 24."

Governor Daniels and INDOT held the groundbreaking ceremony for the Indiana section on April 30, 2008. By December 2008, crews had completed construction on 2 miles (3.2 km) of the freeway from the Ohio state line to just east of the SR 101 interchange. On October 29, 2009, Governor Daniels and Ohio Governor Ted Strickland held a ribbon-cutting ceremony at the Indiana/Ohio state line opening the new US 24 highway from SR 101 near Woodburn, Indiana to Ohio State Route 424 near Defiance, Ohio. The project was complete and the final segment open on November 14, 2012.[8]

In Missouri, with the passage of Proposition 36B, the portion of US 24 that overlaps US 36, from the Rocket Junction 7 miles (11 km) west of Hannibal to Monroe City, will be upgraded to a 4-lane expressway highway by December 31, 2010. This section of the way is now four lanes and as been for better part of 2010.

US 285 in Johnson Village. The highways travel concurrently to Antero Junction.

I‑25 / US 85 / US 87 in Colorado Springs. The highways travel concurrently through the city.

US 40 / US 287 in Limon. The highways travel concurrently to east of Limon.

I‑70 east of Limon. The highways travel concurrently to Seibert.

US 385 in Burlington. The highways travel concurrently through the city.

I‑70 in Burlington. The highways travel concurrently to south-southwest of Levant, Kansas.
Kansas

US 83 south-southeast of Gem

US 281 in Osborne. The highways travel concurrently to south of Portis.

US 81 east of Glasco

US 77 in Riley. The highways travel concurrently to east of Riley.

US 59 in Williamstown. The highways travel concurrently to Lawrence.

I‑435 on the Kansas City–Edwardsville city line

US 69 in Kansas City. The highways travel concurrently through the city.

I‑35 in Kansas City. The highways travel concurrently through the city.

US 65 east of Waverly. The highways travel concurrently to Carrollton.

US 36 in Monroe City. The highways travel concurrently to northeast of Rensselaer.

US 61 south of Palmyra. The highways travel concurrently to Taylor.
Illinois

I‑172 south of Bloomfield

US 136 northeast of Beaty. The highways travel concurrently to Duncan Mills.

US 150 in Peoria. The highways travel concurrently to East Peoria.

US 45 in Gilman. The highways travel concurrently through the city.

US 52 in Sheldon. The highways travel concurrently to Kentland, Indiana.
Indiana

US 231 in Remington. The highways travel concurrently to Wolcott.

I‑65 east of Remington

US 421 in Reynolds. The highways travel concurrently to Monticello.

US 31 in Peru Township

I‑69 / US 33 in Fort Wayne. The highways travel concurrently through the city.

US 127 in Emerald Township

US 6 in Napoleon Township. The highways travel concurrently to Liberty Township.

I‑75 in Toledo
Michigan

I‑96 in Redford Charter Township

I‑75 in Springfield Township