This article is about the section of U.S. Route 1 in New York. For the entire route, see U.S. Route 1.

U.S. Route 1 (US 1) is a part of the U.S. Highway System that runs from Key West, Florida, to the Canada–United States border at Fort Kent, Maine. In the U.S. state of New York, US 1 extends 21.54 miles (34.67 km) from the George Washington Bridge in Manhattan to the Connecticut state line at Port Chester. It closely parallels Interstate 95 (I-95) for much of its course, and does not serve as a major trunk route within the state. It does not overlap with any other roads besides I-95 and (briefly) US 9, and few other state highways intersect it.

It passes through a variety of different terrain within the city and Westchester County, from the Cross Bronx Expressway to several important surface roads in the northwestern Bronx and then the main street of the Westchester suburbs along Long Island Sound. In many of the latter communities, it begins to intermittently follow the route of the historic Boston Post Road, and often still carries that name.

US 1 enters New York concurrent with I-95 and US 9, but returns to a solo surface route a short distance into the Bronx. It remains a busy urban and suburban artery all the way to Connecticut, often four lanes wide and serving as the main street of many of the communities it passes through once it leaves the city. I-95 returns to close proximity in the suburbs as well, and the two roads intersect twice.

US 1 enters Manhattan on the George Washington Bridge together with I-95 and US 9. The concurrency between US 1 and US 9 that began at Woodbridge 31 miles (50 km) to the south ends at the first exit, when US 9 splits to the north to follow Broadway. The expressway continues another mile, crossing under several buildings in short tunnels, before crossing the Harlem River via the Alexander Hamilton Bridge into the Bronx. It is bookended by an exit to the Harlem River Drive on the west and the Major Deegan Expressway (I-87) on the east.[2]

The busy highway, now known as the Cross Bronx Expressway, continues another 2 miles (3 km) until US 1 leaves it at Webster Avenue, one of the Bronx's longest streets, in the Tremont section of the borough, on a northerly heading. A mile and a half beyond the Cross Bronx, US 1 turns right (east) onto Fordham Road, near the eponymous university. At this busy transportation hub, the road also crosses the Metro-North Railroad at the Fordham station.

US 1's eastward heading trends to the south as it enters Bronx Park a mile to the east, after a complex junction with Southern Boulevard. In the park, it crosses the Bronx River, where it trends back to the north again, and has a full cloverleaf interchange with the Bronx River Parkway. Immediately following that, it turns north on Boston Road, the first section of the Boston Post Road it follows into Connecticut. This slants northeast across the eastern outskirts of Williamsbridge past Gun Hill Road into Eastchester, where it starts to veer eastward again, to a route more closely parallel with I-95. At Provost Avenue, New York State Route 22 (NY 22), New York's longest north–south route, starts a journey to the Canadian border. After leaving Provost Avenue, US 1 then crosses the Eastchester Bridge due to the Eastchester Bay in front of it.

The Hutchinson River is next. Just after Ropes Avenue to the south, it leaves New York City.

One-quarter mile into the village of Pelham Manor, the Hutchinson River Parkway crosses over, with access available in both directions. Now Boston Post Road, it crosses the village and, another mile to the northeast, has another interchange at I-95 (now the New England Thruway) just after entering New Rochelle at Pelham Country Club. Just after that it crosses under Amtrak's Northeast Corridor.

A mile past that junction, in New Rochelle's busy downtown, US 1 divides, with northbound traffic staying on Main Street while Huguenot Street takes southbound drivers. The roads rejoin after another mile, at Pratt Street, as the surrounding neighborhood becomes more residential. New Rochelle gives way to Larchmont after another mile, and returns to being Boston Post Road. A mile and a half later, after passing through downtown, NY 125, a short route to White Plains, leaves to the north at Weaver Street. The junction with NY 125 is just north of the Larchmont village limits.

After another few blocks, US 1 comes to the Mamaroneck town line. Here it comes closer to Long Island Sound when it passes Harbor Island Park a mile from the municipal boundary, and then enters the village at Mamaroneck Avenue. A mile past that junction and downtown, NY 127, also bound for White Plains, forks left at Keeler Avenue as US 1 itself begins to trend more to the east into Rye, passing Rye Neck High School at the town line. 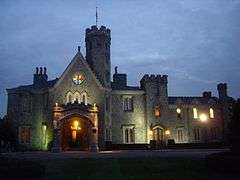 To the right of the wooded area to the north is the Boston Post Road Historic District, a National Historic Landmark characterized by mansions and homes that have remained unchanged since before the Civil War including the 1838 Peter Augustus Jay House, Lounsberry and Whitby Castle. The road begins to head more to the north after passing it and Rye Golf Club, to its intersection with Playland Parkway, which leads to the popular amusement park, Rye's other National Historic Landmark.

One mile past this junction, US 1 crosses downtown Rye, where NY 120 forks off to the north at Purchase Street, and then passes through the junction that marks the eastern terminus of I-287, the Cross-Westchester Expressway, crossing it and I-95 again in the process, with access to both. Immediately afterward it enters Port Chester, its last community in New York.

It curves a bit toward the east here, crossing the railroad tracks again after an industrial area, then turning left on South Main Street to follow a more northern route through the working-class city's busy downtown, where NY 120A touches at Westchester and King streets to eventually follow the New York–Connecticut border back to its parent route.

Now North Main Street, US 1 continues through downtown Port Chester to cross under the tracks again. Traffic lessens here as the neighborhood grows less commercial, and a half-mile later, at Putnam Avenue, the road crosses the Byram River into Greenwich, Connecticut at the beginning of a brief split (southbound traffic enters New York on Hillside Avenue).

US 1 roughly follows the old Boston Post Road, an early colonial highway between New York City and Boston originally laid out in 1673 for transporting mail and later utilized for stage coach travel. The old Boston Post Road began in Lower Manhattan and went north across the length of Manhattan. It crossed into the mainland on Kingsbridge, then continued through a largely abandoned road to Williamsbridge, then across the northern part of the Bronx along Bussing Avenue. It then continued into Westchester County along Kingsbridge Road, South Columbus Avenue, Colonial Avenue, and Kings Highway to present US 1. From there the old Boston Post Road roughly followed modern US 1 into Connecticut. By 1797, a new bridge over the Harlem River, approximately at the site of the Third Avenue Bridge, had been constructed. This significantly shortened the route out of Manhattan and this new alignment became the preferred route. The new alignment used Third Avenue and Boston Road in the Bronx, then continued along modern US 1 through Westchester County.

In 1800, the Westchester Turnpike company was chartered to build and maintain a toll road between New York City and Connecticut. The company straightened out the old Boston Post Road in Westchester County to more or less the modern alignment of US 1. By the middle of the 19th century, most of the toll roads had been dissolved and the roads reverted to public management. In the beginning of the 20th century, the state highway system was established in New York and most of the main thoroughfares came under the control of the State Highway Department. Highways were first publicly marked with route numbers in 1924. The old Westchester Turnpike alignment was designated as NY 1, which matched the route number across the Connecticut state line. NY 1 ended at the New York city limits since roads in the city were not under the control of the State Highway Department.

In 1926, the U.S. Highway system was established. US 1 in New York was designated from Jersey City, New Jersey, through New York City and lower Westchester, to Greenwich, Connecticut. Old NY 1 was incorporated into the new US 1. However, because New York city did not post route numbers, US 1 ended at the 42nd Street Ferry landing in Weehawken (where the old Lincoln Highway crossed into the city) and resumed again at the Bronx–Westchester boundary. By 1928, the Holland Tunnel opened and the end of US 1 on the New Jersey side was moved there.

For several years, the Automobile Club of New York had been lobbying New York City to sign state highways within the city, including US 1. Their proposal was to sign US 1 from the Holland Tunnel, then along Houston Street and Second Avenue, then crossing the Harlem River along the Willis Avenue Bridge, then via Southern Boulevard, West Farms Road, and Boston Road. In December 1934, New York City finally agreed to sign routes within the city. By this time, the new George Washington Bridge had opened and it was decided that US 1 and US 9 would be routed through there. The old proposed US 1 alignment through Manhattan became NY 1A. When first signed in New York City, US 1 utilized 181st Street, then crossed the Harlem River on the Washington Bridge, and then continued on University Avenue and Fordham Road before continuing on modern US 1. In 1977, US 1 was moved to Webster Avenue and the Cross Bronx Expressway, crossing the Harlem River using the Alexander Hamilton Bridge.

US 1 once had as many as three suffixed routes; however, all three were eliminated by the 1960s.

Template:Attached KML/U.S. Route 1 in New York
KML is from Wikidata
This article is issued from Wikipedia - version of the 11/10/2016. The text is available under the Creative Commons Attribution/Share Alike but additional terms may apply for the media files.