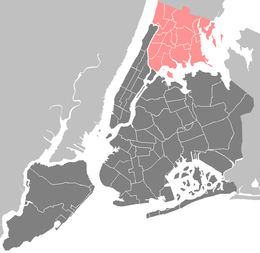 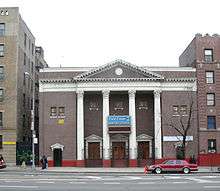 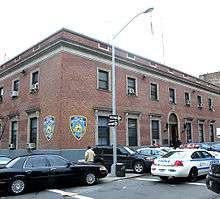 Tremont, is a residential neighborhood geographically located in the west Bronx, New York City. The neighborhood is part of Bronx Community Board 6. Its boundaries, starting from the north and moving clockwise are: East 181st Street to the north, Southern Boulevard to the east, the Cross-Bronx Expressway to the south, and the Grand Concourse to the West. East Tremont Avenue is the primary thoroughfare through Tremont. The local subway is the IND Concourse Line (B D trains), operating along the Grand Concourse. Zip codes include 10453 and 10457. The area is patrolled by the NYPD's 48th Precinct located at 450 Cross Bronx Expressway within Tremont.[3]

Tremont has a population of around 24,739. The neighborhood is now predominantly Dominican, with a significant longstanding Puerto Rican and African American population.[1][4]

Land use and terrain

Tremont is dominated by 5 and 6-story apartment houses. The total land area is less than 1-square-mile (2.6 km2). The area is elevated above adjacent areas and is very hilly. Stair streets connect areas located at different elevations.

Rather than having come from a colonial settlement, the name "Tremont" was invented by a postmaster in the 1800s, derived from the three ("tre") neighborhoods of Mount Eden, Mount Hope, and Fairmount in the west-central Bronx.[7]