Some of the neighborhoods that Grand Concourse runs through include Claremont, East Concourse, Fordham, Mott Haven, Mount Eden, Mount Hope, and Tremont.[2] 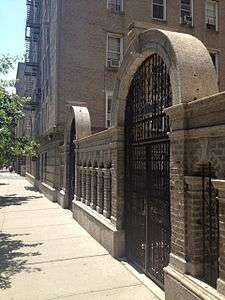 At East 158th Street in the eponymous neighborhood 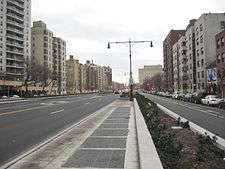 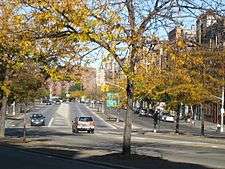 Risse first conceived of the road in 1890, as a means of connecting the borough of Manhattan to the northern Bronx.[3] Construction began on the Grand Concourse in 1894 and it was opened to traffic in November 1909. Built during the height of the City Beautiful movement, it was modeled on the Champs-Élysées in Paris but is considerably larger, stretching four miles (6 km) in length, measuring 180 feet (55 m) across, and separated into three roadways by tree-lined dividers, so some minor streets did not cross the Concourse. The cost of the project was $14 million (worth $398,888,000 today).[4] The road originally stretched from the Bronx Borough Hall at 161st Street north to Van Cortlandt Park, although it was expanded southward to 138th street in 1927 after Mott Avenue was widened to accommodate the boulevard.[5]

The IRT Jerome Avenue Line of the New York City Subway opened a few blocks west of the Grand Concourse in 1917, initiating a housing boom amongst upwardly mobile, predominantly Jewish and Italian, families who were fleeing the crowded tenements of Manhattan. In 1923, Yankee Stadium opened near the Grand Concourse at 161st Street, down the hill from the Concourse Plaza Hotel. South of Fordham Road, the palatial Loew's Paradise theater, one of the Loew's Wonder Theatres and at one time the largest movie theater in New York City, was constructed in 1929.[6]

Development of the Concourse was further encouraged by the opening of the IND Concourse Line in 1933. By the mid-1930s, almost three hundred apartment buildings had been built along the Concourse. Customarily five or six stories high with wide entrance courtyards bordered with grass and shrubs, among these apartments are many of the finest examples of Art Deco and Art Moderne architecture in the United States. Even though the Great Depression, which was happening at the time, ended the period of tremendous growth, privately financed apartment buildings continued to be constructed. Furthermore, work was done on the Grand Concourse as part or WPA programs.[2] During this period, the Bronx had more amenities than other boroughs: in 1934, almost 99% of residences had private bathrooms, and 95% had central heating.[7] In the 1939 WPA guide to New York, the Grand Concourse was described as "the Park Avenue of middle-class Bronx residents, and the lease to an apartment in one of its many large buildings is considered evidence of at least moderate business success."[8] 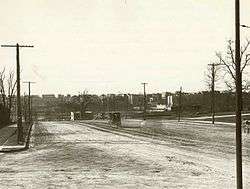 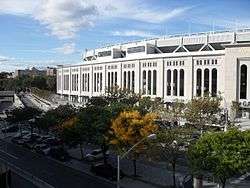 Today, with Yankee Stadium in background

The south and central Bronx began to rapidly deteriorate in the 1960s. White flight drained many residents of the South Bronx, pulled by the dream of suburban life and pushed by fear of mounting crime. At the same time, over 170,000 people displaced by slum clearance in Manhattan, mostly African American and Puerto Rican, moved to the Bronx. The city also adopted policies of relocating welfare recipients to the area, paying fees to landlords. Migration to the suburbs, retirement to Florida, and the construction of Co-op City in the fringes of the northeastern Bronx between 1968 and 1970 drained the areas along the Grand Concourse of most of its remaining middle-class residents. Many if not most buildings in the area were damaged by arson, vandalism, and a lack of maintenance. Even along the Grand Concourse, some buildings and apartments were left abandoned and boarded or bricked shut. Starting in the 1990s, when the Bronx's population began to grow for the first time in twenty years, a wave of affordable housing construction came to the area.

In 2011, the New York City Landmarks Preservation Commission declared a historic district on the Grand Concourse from 153rd to 167th Street.[11][12] The State of New York had previously nominated for listing the buildings at 730-1000, 1100-1520, 1560, and 851-1675 Grand Concourse for listing on the National Register of Historic Places as a historic district[1][13] and several New York City Landmarks are on the Concourse.[14]

Because of its attractive art deco buildings and close proximity to Manhattan, the southern portion has been experiencing gentrification and is drawing many young professionals to the area.[15] In fact, in recent years the area around the Grand Concourse has been the center of what real state agents are calling a “renewal.” New people are moving in and severe crime rates have significantly gone down. However, opinions are still divided, as some think that, while the area will experience demographic changes, it will be working-class, “community-oriented” people, as opposed to richer individuals, like in other neighborhoods of the city.[16]

Several buildings of importance to New York City and the Bronx, both because of their history and their current use, are located along the Grand Concourse.[2] Among these stand out: 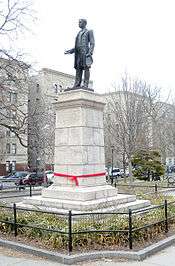