He also led Italy to a gold medal at the 1936 Olympic football tournament, and managed the champions of the 1930 and 1935 Central European International Cup.

Vittorio Pozzo was born in Ponderano. He attended the Liceo Cavour in Turin, his hometown; he later studied languages and played football in France, Switzerland and England. He studied in Manchester at the turn of the 20th century and met Manchester United half-back Charlie Roberts and Derby County's inside-left Steve Bloomer.[4][5]

As a player, he played professionally in Switzerland for Grasshopper Club Zürich the 1905–06 season, before returning to Italy where he helped found Torino F.C. (then "Foot-Ball Club Torino"), a team which he played for five seasons until retiring from football in 1911.[6] He would serve as the technical director of Torino from 1912 to 1922. After completing his studies, he joined Pirelli, where he became manager, a position he would leave for the Italian national team.

He was appointed commissioner for the first time of the national team during the Olympic Games in Stockholm in June 1912, the first debut ever for an Italian selection in an official competition. The team was eliminated in the first round losing 3-2 to Finland after extra time. Pozzo resigned and returned to work at Pirelli; only to return to the national team in the hands of a so-called "technical committee", a committee composed of federal managers, referees, players, former players, coaches and journalists.[5][7]

Throughout his first term the national team was guided by this diverse group of people. With the brief exception of Augusto Rangone (in 1925-1928) and Carlo Carcano (1928-1929), Pozzo was the only person to play the role of sole commissioner until the sixties. Pozzo would also serve with the Alpini as lieutenant during the First World War.

In 1921, Pozzo was commissioned by the Football Association to study a draft reform of the league to address the tensions between the bigger and the smaller teams, because it was thought that the number of participants in the championship had to be reduced. The mediation failed resulting in the split between the FIGC and CCI, before merging again the following year.

In 1924, on the occasion of the Olympic Games in Paris, Pozzo was again appointed sole commissioner. This time the Azzurri were able to reach the quarter-finals, where they were beaten 2–1 by Switzerland. After this defeat, Pozzo resigned and returned to devote himself to his work and his wife, who shortly after died due to a disease. After the death of his wife, he moved to Milan, where he held his job at Pirelli, alongside that of a journalist for La Stampa in Turin, which he continued almost until his death.[8]

Successes during the 1930s

Pozzo returned to coach the Italy national team on a permanent basis from December 1929[9] Italy won the 1930 version of the Central European International Cup, defeating Hungary 5–0 in Budapest. They pipped the title from Meisl's Austrian side, the so-called Wunderteam who went on to win the second edition of that tournament.

Following the 1930 defeat to Spain, Pozzo left out Adolfo Baloncieri, his captain and an international of ten years standing.[10] In 1932, Austria beat Italy, as did the Czechs, while a defeat to Hungary was only averted because of a missed penalty. This led to Pozzo bringing back the Bologna player Angelo Schiavio, who had been a regular goalscorer for his club, but in February 1934 with the World Cup looming Austria defeated Italy in Turin 4–2, again Pozzo fell the axe on the team captain Umberto Caligaris.

During the 1934 FIFA World Cup in their home country, Pozzo's Italian side benefited from controversy in the first tournament on European soil. The game against Spain in the quarter-finals raised questions against the performance of the referee Louis Baert in the match, a draw; and in the replay, Swiss referee Rene Mercet did not escape criticism and was banned upon his arrival home by the Swiss FA. A foul on Ricardo Zamora for the equaliser in the first leg went unpunished while another on Joan Josep Nogués in the replay earned Italy a semi-final place.

Italy benefited as well from the quarter-final played elsewhere between Hungary and Austria. By the time of the semi-final, Johann Horvath was absent and Italy won by a goal over Austria. Enrique Guaita, one of the squad's Oriundi, scored from close range after Giuseppe Meazza had fallen over goalkeeper Peter Platzer. On the back of the World Cup success, Pozzo was awarded the title of Commendatore for greatness in his profession.

The Battle of Highbury on 14 November 1934 against England led by Arsenal's Wilf Copping ened 3–2 in favour of England.

Italy repeated as Central European International Cup winners in 1935, going into the 1936 Summer Olympics on the back of a run which had seen them lose only to Austria and England.

By the time of the 1938 World Cup, Italy remained undefeated in recent competition under Pozzo. Silvio Piola earned his first cap in 1935, scoring regularly for the national side and proving an effective partner for Meazza. Pozzo learned that the Brazilians were so confident of appearing in the final in Paris that they had requisitioned the only airplane from Marseilles to Paris on the day after the semifinal against Pozzo's Italy. Pozzo went to the Brazilians that sunbathed in Côte d'Azur and asked them to surrender him the aerial bookings in case of Italian victory. The Brazilians apparently arrogantly answered "it is not possible because to Paris we will go, because we will beat you in Marseilles".[11][12] They then reportedly offered Pozzo the ironic hospitality of a plane ride to Paris to see them play in the final. Pozzo reported to the Italian side what the Brazilians had told him to rouse the pride of the players. It was the psychological premise for revenge in the match, which Italy went on to win 2–1. Brazilians did not want to sell the tickets to the Italians, who were then forced to reach Paris by train. In the resulting final, Italy duly won their second world title 4–2 against Hungary.

During World War II, Pozzo remained in position throughout the hostilities. At the Olympic Games in 1948, Pozzo's last match as Italian coach came as a 5–3 defeat to Denmark in the quarter-finals at Highbury Stadium in London. Pozzo finished with a record 64 wins, 17 draws and 16 defeats[13] from 97 games.

Pozzo became a journalist with Stampa after retiring from football management, resuming a career he had worked in prior to his successes as coach of Italy. He reported on the 1950 FIFA World Cup as part of his work covering Italian national team matches. After watching Italy win the 1968 European Football Championships, the successor to the Central European International Cup he had won twice with the Azzurri, Pozzo died that year. 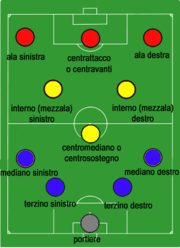 The Metodo of Vittorio Pozzo

Until the 1930s, a common tactic in football was the so-called pyramid of Cambridge, which is a 2–3–5 in the shape of inverted pyramid that had its apex in the Keeper. The design of this scheme is given to the team of the famous British university, and its launch is due to Blackburn Rovers, who applied it for the first time in the 1890s, and winning five league cups. For over 30 years this form experienced uninterrupted luck in the British Isles and, by extension, the world. In the years after World War I, by evolution, from the pyramid originated simultaneously WM, or 'sistema', practiced by Arsenal of Herbert Chapman and the 'metodo', whose fathers are commonly identified in Vittorio Pozzo and his friend and rival Hugo Meisl, for 25 years coach of the Austria national football team.

Pozzo and Meisl developed the idea of an array with two defenders full-back and a player central position in front of the defense, between the two half-backs. Compared to the system the forward displacement of the central defender gave more support to the half-backs. Finally, the retreat towards the median of the two 'inside forwards' of the pyramid (also called "half-wings") gave rise to a formation of the type 2–3–2–3, or "WW", because it repeated the form of these letters on the field. In this way we created a de facto numerical superiority in midfield defense was more protected and counter-attacks were faster and more effective.

The other matter that Pozzo benefited from was ‘oriundi’ (that is foreign-born Italian ‘nationals’) which permitted Italy to take advantage of those players from other countries who could claim some type of Italian ancestry. In the 1930s he was able to call on Luis Monti, a midfielder (who had appeared for the Argentinians in their 1930 World Cup final defeat) and who was an important part of the success of the team in the 1934 World Cup.

About the criticisms receipts to call on oriundi players in the victorious world cup of 1934, reporting to the fact that them same served in the army, he said: "If they can die for Italy, they can also play for Italy".[14]

He was also a fan of Raimundo Orsi, an Argentinian from Buenos Aires after an undistinguished stint in the Argentinian shirt. Orsi, never a prolific goalscorer, would reward Pozzo's faith with a goal in the 1934 World Cup final.[9] Not that he dispensed with home-grown talent, but his penchant for attacking play is demonstrated by the fact that as well as Schiavio, Pozzo was successful in converting Giuseppe Meazza, who was captain in 1938, from a striker into an inside forward; indeed Pozzo's reign is linked closely to the success of his strikers. In the 1938 World Cup another ‘oriundi’ was the Uruguayan Michele Andreolo.

Brian Glanville has stated that Pozzo was not a fascist; he did, however, work alongside Giorgio Vaccaro – a general from the fascist militia during that first World Cup campaign.

The third edition of the FIFA World Cup took place in France, where numerous refugees who had escaped the fascist regime in Italy booed the Italian national team. In the first match of the Italian national team, against the Norwegian national team, among the twenty-two thousand spectators there were three thousand escaped anti-fascist Italians who opposed "Mussolini's national team". Pozzo replied to the demonstration with a memorable episode. To the presentation of the teams in field, gli azzurri had made the fascist salute as it was custom. They were overwhelmed by the whistles. He feared that that reception demoralized the players. When the whistles diminished, because gli azzurri lowered the arm, Pozzo that was lined up with them to the centre of the field ordered a new Roman salute. He said then: "So we won the intimidation."[12]

The coach Pozzo ordered the players to continue with the fascist salute during the national anthem. Afterwards he declared: "Our players don't even dream to make some politics, but the fascist salute is the official flag of the moment, it's a sort of ceremony and they must show allegiance to it. I have my ideas, but I know what my duty is. When we take to the field we are solemn and deafening hisses attend us. And we don't lower the hand until the hisses are stopped. The action of intimidation has not succeeded". The quarter-final, in Paris against France, saw Italy play in the all-black strip (There has been much conjecture as to the reason for this decision, although some ideas have been mooted: to intimidate the French; to antagonize the refugees and the anti-fascist patriots in the crowd: No single idea has succeeded.)