César Luis Menotti (Spanish pronunciation: [ˈsesaɾ ˈlwis meˈnoti]), known as El Flaco ("the slim one") (born November 5, 1938 in Rosario), is an Argentine football coach and former player who, as coach, won the 1978 FIFA World Cup for Argentina. He played as a striker.

Menotti grew up in the Fisherton district of Rosario and played for local clubs before a scout for Rosario Central picked him up. He played in the youth divisions while attending high school (he graduated as a chemical technician) and was signed by Central. He also played for the Argentine national football team and Santos FC.

After retiring from play, he became friends with coach Miguel "Gitano" Juárez, with whom he traveled to the 1970 FIFA World Cup in Mexico. Fascinated by the Brazilian style of play led by his pal Pele, he decided to become a coach himself.

He won the 1973 Metropolitano title with Huracán, with a side that included Carlos Babington.[1]

He was appointed Argentina coach in October 1974.[2]

Menotti's initial team was Fillol; Olguín, Galvan, Passarella, Tarantini; Ardiles, Gallego, Valencia; Houseman, Luque, Kempes. This team defeated Hungary and France without convincing critics, and then lost to Italy. Having achieved the second place in the qualifying round, Argentina was to play the second round in Rosario. Menotti benched Valencia and Houseman, moved Kempes to the midfield, and promoted Daniel Bertoni and Oscar Ortiz to the wings.

A convincing 2-0 victory over Poland in the second round was followed by a 0-0 draw against Brazil. The last day was scheduled so that Argentina would play Peru already knowing the result of the Brazil-Poland match. Since Brazil won 3-1, Argentina needed a four-goal spread to reach the final. The match against Peru ended with a 6-0 Argentine victory.

In the final against the Netherlands, Argentina were victorious in extra time.

In the final months of 1978, when Menotti's contract was due to expire, he played a game of brinkmanship with the Argentine Football Association, which ultimately agreed to his demanding terms, both financially and professionally. Menotti's team included assistant coaches Rogelio Poncini and Roberto Saporiti, as well as fitness trainer Ricardo Pizzarotti and physician Rubén Oliva.

In 1979 he led Argentina to success in the World Youth Championship in Japan, with Diego Maradona the team's star player.[3]

In 1980 the team played the Mundialito in Uruguay but failed to reach the final.

During the build-up to the 1982 FIFA World Cup, Menotti maintained the same defensive line as in 1978, but modified the attacking lineup to include new players, notably Maradona, Juan Barbas, Ramon Diaz, and Jorge Valdano.

Argentina went on to defeat Hungary and El Salvador, and met Italy and Brazil in Group 3 of the second round, although they lost both matches. 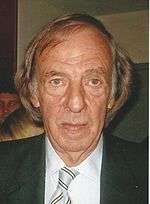 He was appointed FC Barcelona coach in March 1983, helping them to win the Copa del Rey, Copa de la Liga and Spanish Super Cup, before leaving the club in 1984.[4]

Ever since, Menotti has alternated between coaching jobs and teaching and lecturing stints. During the 1980s, he held the post of coach at both Boca Juniors and River Plate, and achieved second place with both. On both occasions, his main tactical contribution was making defenders play the achique ("shrinking"), his version of the off-side trap. Through all those years, Menotti stuck to zonal defending—at a time when man-to-man defending was prevalent.

Menotti always displayed a rebellious streak and cultivated an image of coolness. He wore long hair, dressed casually, and used to drop references to cultural icons in his conversations, from writer Ernesto Sabato to singer Joan Manuel Serrat. He was opinionated on politics, projecting a left-wing socialist image that contrasted with his holding a very visible post during the right-wing military dictatorship.[5] In 1982 a Spanish magazine published an interview in which Menotti harshly criticized the ruling military junta.

There's a right-wing football and a left-wing football. Right-wing football wants to suggest that life is struggle. It demands sacrifices. We have to become of steel and win by any method... obey and function, that's what those with power want from the players. That's how they create retards, useful idiots that go with the system.[6]