Not to be confused with Yamagata, Gifu. 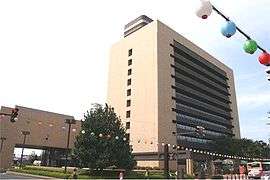 Yamagata (山形市, Yamagata-shi) is the capital city of Yamagata Prefecture located in the Tōhoku region of northern Japan.

Yamagata is located in mountainous southeast Yamagata Prefecture. The Mogami River passes through the city, which includes Mount Zaō within its borders.

Yamagata City falls within the northern extremity of the humid subtropical climate transitioning into humid continental in the north. This climate zone is characterized by hot, humid summers with daytime temperatures commonly higher than 30 °C (86 °F) and moderately long, cold and very snowy winters. Yamagata city is part of the heavy snow area of Japan (Gosetsu chitai, 豪雪地帯) with snowfall most days throughout the winter season.

Yamagata City is located in a wide central valley that can heat up quickly in spring and summer and is often grey and humid, while to the east in Miyagi Prefecture on the Pacific coast it is usually clearer and more temperate.

The area of present-day Yamagata was part of Dewa Province. During the Edo period, it was the center of Yamagata Domain under the Tokugawa shogunate. The modern city of Yamagata was founded on April 1, 1889 as the capital of Yamagata Prefecture. The city attained Special city status on April 1, 2001.

Yamagata is twinned with the following towns and cities.[3]