Yamagata Prefecture (山形県, Yamagata-ken) is a prefecture of Japan located in the Tōhoku region on Honshu island.[1] Its capital is Yamagata.[2]

The aboriginal Ezo (蝦夷) people once inhabited the area now known as Yamagata. Yamagata and Akita Prefecture were known as Dewa Province until the Meiji Restoration.[3]

During the Heian Period (794–1185), the Fujiwara (藤原) family ruled the area. Yamagata City flourished during the Edo Period (1603–1867) due to its status as a castle town and post station, famous for beni (red safflower dye used in the production of handspun silk). In 1689, the famous haiku poet, Matsuo Bashō visited Yamagata during his five-month trip to the northern regions of Japan. 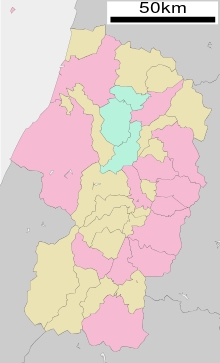 Map of Yamagata Prefecture showing cities in pink, towns in yellow, and villages in cyan. 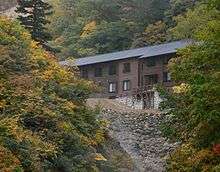 As of 1 April 2012, 17% of the total land area of the prefecture was designated as Natural Parks, namely the Bandai-Asahi National Park; Chōkai, Kurikoma, and Zaō Quasi-National Parks; and six Prefectural Natural Parks.[4]

The climate of Yamagata Prefecture is characterized by long hot humid summers and long snowy winters. Both spring and autumn are short, the former often cold, the latter often warm, but both quite dry and sunny. Yamagata Prefecture, along with northern parts of Miyagi and Iwate are the transition areas from humid subtropical climate (Koppen Dfa/Dfb) to humid continental within the Japan mainland. Winter temperatures rarely fall below -10 °C in populated areas; they frequently rise above 30 °C in July and August. Precipitation falls all year round and the remnants of one or perhaps two typhoons usually pass through between August and October. The winters see heavy snowfall especially at higher elevations, though the Japan Sea coast (Sakata) is milder and has more rain. Snowfall for Shinjō is typical of populated mountainous areas, snowfall for Yamagata City typical of the valleys. The central mountains around Gassan may see as much as 3000 cm of snow in a season with depths up to 8 metres at higher elevations. 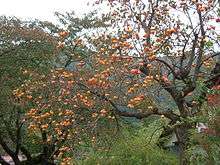 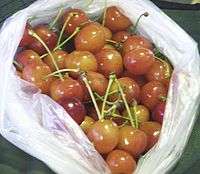 Yamagata cherries, such as these, often sell for USD $30 per pound or more.

Yamagata Prefecture is the largest producer of cherries and pears in Japan. A large quantity of other kinds of fruits such as grapes, apples, peaches, melons, persimmons and watermelons are also produced.

Yamagata Prefecture has a number of annual festivals and events.

The largest is the hanagasa matsuri (花笠祭り) which takes place in Yamagata City on the first weekend in August, when thousands of people perform the hanagasa dance in the city centre and attracts up to 300,000 spectators. Yamagata City is the home of the bi-annual Yamagata International Documentary Film Festival in October.

In February, a snow lantern festival is held in Yonezawa at the Uesugi Shrine. Hundreds of candle-lit lanterns light pathways dug into the snow around the shrine. Yonezawa is also the site of the Uesugi Festival (上杉祭り, uesugi matsuri) in mid-spring. The festival's highlight is a re-enactment of the Battle of Kawanakajima on the banks of the Matsukawa River.

In September, Yamagata Prefecture is famous for its imoni, a potato stew popular in Northern Japan during the autumn. Imonikai, potato soup parties, are very popular during this season, and many tourists come to Yamagata Prefecture specifically for its particular style of imoni.

Beginning in 2003, Yamagata city officials with the aid of Tōhoku University of Art and Design began a three-year project in which the Buddhist art of the city’s temples would be catalogued and compared to a set of guidelines in order to identify “cultural assets.”[11] One hundred and ninety temples have had their works of art examined and several significant examples of Buddhist sculpture have been discovered. At Heisenji Temple, in the Hirashimizu district, a particularly rare statue, a seated Vairocana Buddha made from zelkova wood, was found. Other significant works include sculptures from the Heian Period (794–1185) and Kamakura Period (1192–1333).

The Yamagata Museum of Art, located in Yamagata City, was opened in 1964 through the efforts of a foundation led by Yoshio Hattori, the president of Yamagata Shimbun and Yamagata Broadcasting Co, Ltd. The permanent collection consists of three types of art: Japanese and Asian, regional, and French. Special exhibitions are held periodically.

Yamagata Prefecture is known for its local dialect Yamagata-ben, sometimes thought of as backward sounding in other parts of Japan. The 2004 movie Swing Girls (スウィングガールズ), co-written and directed by Shinobu Yaguchi, is set in Yamagata and makes use of Yamagata-ben for comedic purposes.

The sports teams listed below are based in Yamagata.

The temple of Yama-dera, carved into the mountainside near the city of Yamagata, is a major attraction.

The Dewa Sanzan are three holy mountains that form a traditional pilgrimage for followers of the Shugendō branch of Shintō. The famous Gojudo (five-story pagoda) is at the base of Mount Haguro, the lowest of the three mountains.

Mount Zaō is a famous winter ski resort, also known for its snow monsters (frozen snow-covered trees) in the winter, and the Okama crater lake, also known as the Goshiki Numa (Five Color Lake) because its colour changes according to the weather.