In contrast with the 1960 Games, many events had more than three participants, meaning that athletes were no longer guaranteed a medal upon completing their event.[3]

Tokyo will host the Summer Paralympic Games again in 2020..

Nine sports were competed at the 1964 games. In athletics, a wheelchair racing event in the form of a 60 m dash was added; previously the athletics program had included only field events. Wheelchair racing has since become one of the most prominent Paralympic events.[5]

Athletes from 17 of the 19 National Paralympic Committees (NPCs) won at least one medal. By default, the table is ordered by the number of gold medals the athletes from a nation have won. The number of silver medals is taken into consideration next and then the number of bronze medals. If nations are still tied, equal ranking is given and they are listed alphabetically by IPC country code.

With a few exceptions, each event contributed one medal of each type to the table (although for team events, multiple physical medals were actually awarded). Two bronze medals were awarded in the dartchery, snooker and table tennis events.[6][7][8] Some swimming events did not award silver or bronze medals.[9]

The 1964 Games marked South Africa's Paralympic Games début. The country had just been banned from taking part in the Olympic Games, due to its policy of apartheid, and was thus absent from the 1964 Summer Olympics. It was not, however, banned from the Paralympics until 1980, and Japan (as host country) did not oppose its participation.[14][15] 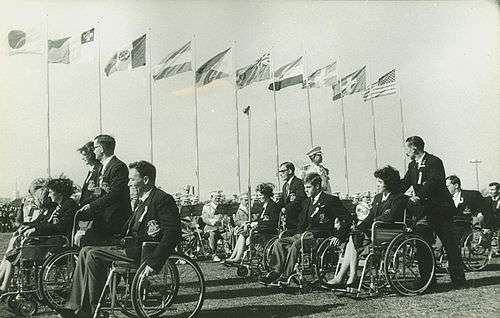 The Opening ceremony was organized in the Oda Field, and the Closing Ceremony at Yoyogi National Gymnasium.[5] About 5000 spectators were present at both of the ceremonies.[5] Then Crown Prince Akihito and Crown Princess Michiko were present in both of them.[5]

Earlier it was thought that the Games might not get much media coverage, due to the focus on the Olympic Games, but both radio and television media gave high coverage to the Games.[5]

Yoshisuke Kasai was the chairman of the Board of directors.[1] The board had 3 vice-chairmen, namely T. Azuma, H. Dazai and I. Miki.[1] The auditor of the organizing committee was M. Tozawa,[1] and the secretary general was K. Ujiie.[1]